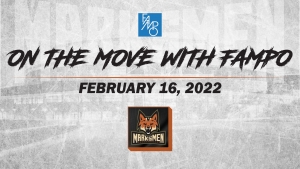 FAYETTEVILLE, N.C.- The Fayetteville Marksmen, proud members of the Southern Professional Hockey League, announced that forward Nolan Sheeran has been signed ahead of this weekend’s contests.

Sheeran, from East Amherst, N.Y., has logged three games for the Marksmen this season playing from December 3 to December 5.

After his stint with the Marksmem, Sheeran logged five ECHL games with the Florida Everblades. He did not register a point.

In 2018-19. Sheeran skated exclusively with the Marksmen scoring four goals and notching a career high 28 assists. Prior to the COVID-19 pause, he was playing in the France2 league with Dunkerque.

Sheeran is expected to dress this weekend on the road as the Marksmen face off against Macon and Knoxville.