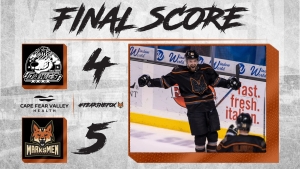 Tanner Froese opened the scoring for the Marksmen when Henry Dill turned the puck over behind the net. Dill would turn out 13 of 14 shots in the opening period. Not to be outdone, Brent Moran would fight off 17 of 18 in the first period.

Mac Jansen notched his 20th goal of the season to tie the game at one, 12:08 into the opening period.

In the second, Matt O’Dea would score his first of two goals for Roanoke. The Rail Yard Dawgs would hold a lead for only 49 seconds in the contest.

Don Olivieri forced a turnover in the Marksmen attacking zone and zinger a wrister past Dill to even the score.

Then, on the powerplay, Tommy Besinger gave the Marksmen the lead with 13 minutes to go in the second period.

Relentlessly on the attack, Fayetteville would add their fourth when Zach Remers centered to Zack Hoffman who scored his first professional goal. The Hoffman goal would force Dan Bremner to lift Dill for Austyn Roudebush, the third straight game that Roanoke has pulled its starter vs. the Marksmen.

O’Dea would tally another, and then Marksmen forward Tommy Besinger was ejected for spearing and assessed a major penalty. The Rail Yard Dawgs failed to capitalize on the extended man advantage and Olivieri would add a shorthanded marker to bring the score to 5-3.

In the third period, Roanoke would see Jeff Jones deflect a shot by Moran late in the third, but the comeback effort fell short. The Rail Yard Dawgs have still yet to win a game when entering the third period trailing.

These two teams will not meet again until March 17 at 10 a.m. for the Marksmen annual School Day Game.

Fayetteville will hit the road for trips to Macon and a pair of games vs. Knoxville next weekend before returning home for a critical three-game stretch vs. Quad City.