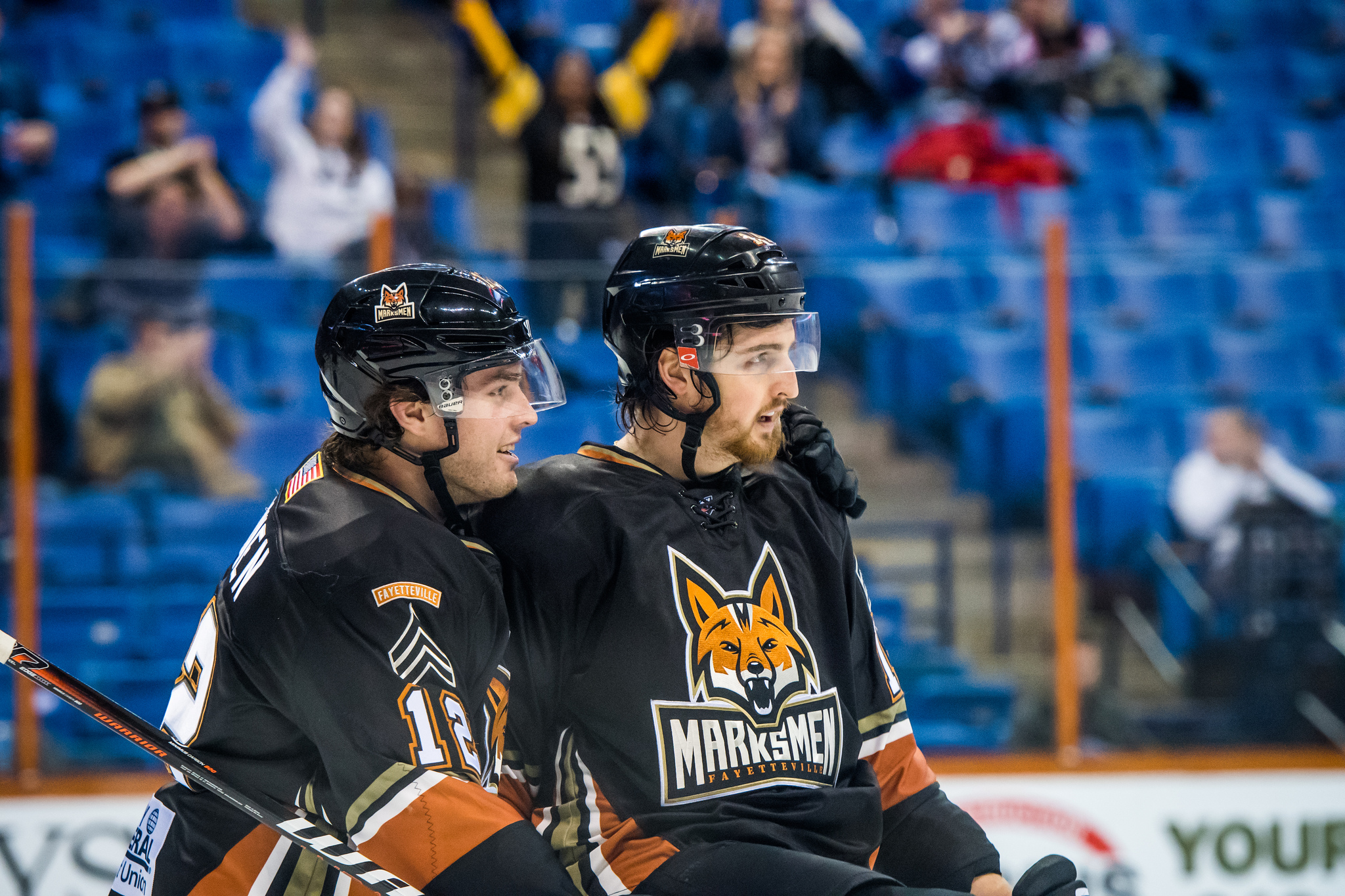 FAYETTEVILLE, N.C. – A long-winded rivalry weekend ended in a disappointing result for the Marksmen, despite what turned out to be two great efforts from the team.

After a pair of unlucky bounces in Macon on Friday night, the Marksmen battled themselves back into a great game against the Mayhem, ultimately falling 4-2 after an empty-net goal sealed it in the final minutes. In Roanoke on Saturday night, a back-and-forth battle saw the Rail Yard Dawgs ultimately do just enough to take it at home in the shootout.

While the results on the record for the Marksmen will spell out four straight losses, that doesn’t truly tell the tale of the tape for Fayetteville. This was one of the harder fought weekends from the team that we’ve seen in some time, with outstanding efforts and a real drive to fight. However, when it comes against arguably the best team in the SPHL like Macon, or against a hot-and-rising Roanoke team, it just won’t be enough.

Don’t expect this skid to continue, as the Marksmen are still finding their stride despite their recent shortcomings on the scoresheet. Fayetteville was a few bounces away from at least one win this weekend, and will look to return to home ice Friday and in Roanoke Saturday with revenge in mind.

With all the weekend’s festivities passed, it’s time to unveil our Three Stars from Week 9.

Despite what ultimately Jeke would call a disappointing weekend, the league-leading scoring defensemen picked up yet another three points in these two contests. With an assist to Bowen on the first goal of the weekend at Macon, and then following up with a pair in Roanoke on Saturday night for Bowen (again) and Hauswirth, he was a key part of the operation this weekend.

Jeke found himself once again with a high-quantity of shots, working as the anchor of the power play, and as a top pair defenseman. The points that he picks up week-in-and-week-out are not just stat loaders, but genuinely important – often as the lead assist – points that impact the game itself.

As reliable of an offensive-option as any of the forwards on the squad, Jeke has shown once again this weekend his prowess and ability as a decisive, focused player on the blue line. When Jeke has a lane, he’ll move up and fire his wicked shot, but with his scoring touch is coming his maturity as well, and it’s evident as he’s worked himself as one of the top assisters in the league.

The streak of a point every weekend continues for Jeke, as he finds his point total (19) now matches his games played (19); not a mark you’ll see all too often from defensemen.

Travis Jeke was named as an Alternate Captain this weekend, and with his scoring ability and immediacy to stick up for teammates on the ice, it doesn’t come as a surprise. Jeke’s stock is high, and he’s having a blast.

Every game, the difference that this team has had since bringing aboard the Pensacola Pair via trade is more evident. Johansson maintains as a hard-hitting, sturdy, stay-at-home defensemen, and his offensive counterpart Brian Bowen seems to score.

In fact, Bowen has doubled up his point total from the Ice Flyers in half as many games. When with Pensacola, he was an average-scoring forward with four points (3G+1A) in 11 games. With the Marksmen, he’s already scored eight points (4G+4A) in just six games. Bringing his season total to 12 points (7G+5A) in 17 games, and quickly becoming a notable offensive unit.

This weekend, Bowen found himself with a goal in each game, getting the first against Macon to start the comeback effort, and scoring the tying goal in Roanoke in the early third on Saturday.

The offensive impact that Bowen has had for Fayetteville is unbelievable, and the way that he’s immediately gelled into the mold of this team is impressive. Working as a hot-shot on the blue line for power plays, him and Jeke seem to be the leaders of the man-advantage.

From what we’ve seen of his abilities, it doesn’t matter where you put him on the ice or who he is with, he is able to generate goals with his shot or his passes. He’s been a true difference maker for the Marksmen, and his scoring touch will be key heading into another rivalry weekend.

After a hard-fought series against Birmingham that didn’t go his way, Dillon Kelley responded with a fire this weekend against the Mayhem and Dawgs.

Coming on in relief duty on Friday night, Kelley looked as prepared as if he were the outright starter. Inheriting a two-goal deficit, Kelley would allow the Mayhem to muster up just one goal on 32 shots against (31 saves). His outstanding performance was crucial for the Marksmen comeback effort – despite it ultimately falling short.

On Saturday night, Kelley was once again put to the task of stopping a high-volume shooting team in the Rail Yard Dawgs. On a 35 shot night, including extra effort in overtime and the shootout, Kelley rose to a 32 save game.

While the Marksmen couldn’t find a win in their weekend, Kelley put on another outstanding performance, allowing just four goals against two of the league’s higher-shooting teams in two games.

The young goaltender – in just his first professional season – is putting out a powerful statement on what his expectations are for this team. When he gives you performances like these two, you know you have a chance in every single game.

Heading back into battle against Roanoke this weekend, look for Kelley to stay sharp and be ready to steal some wins.