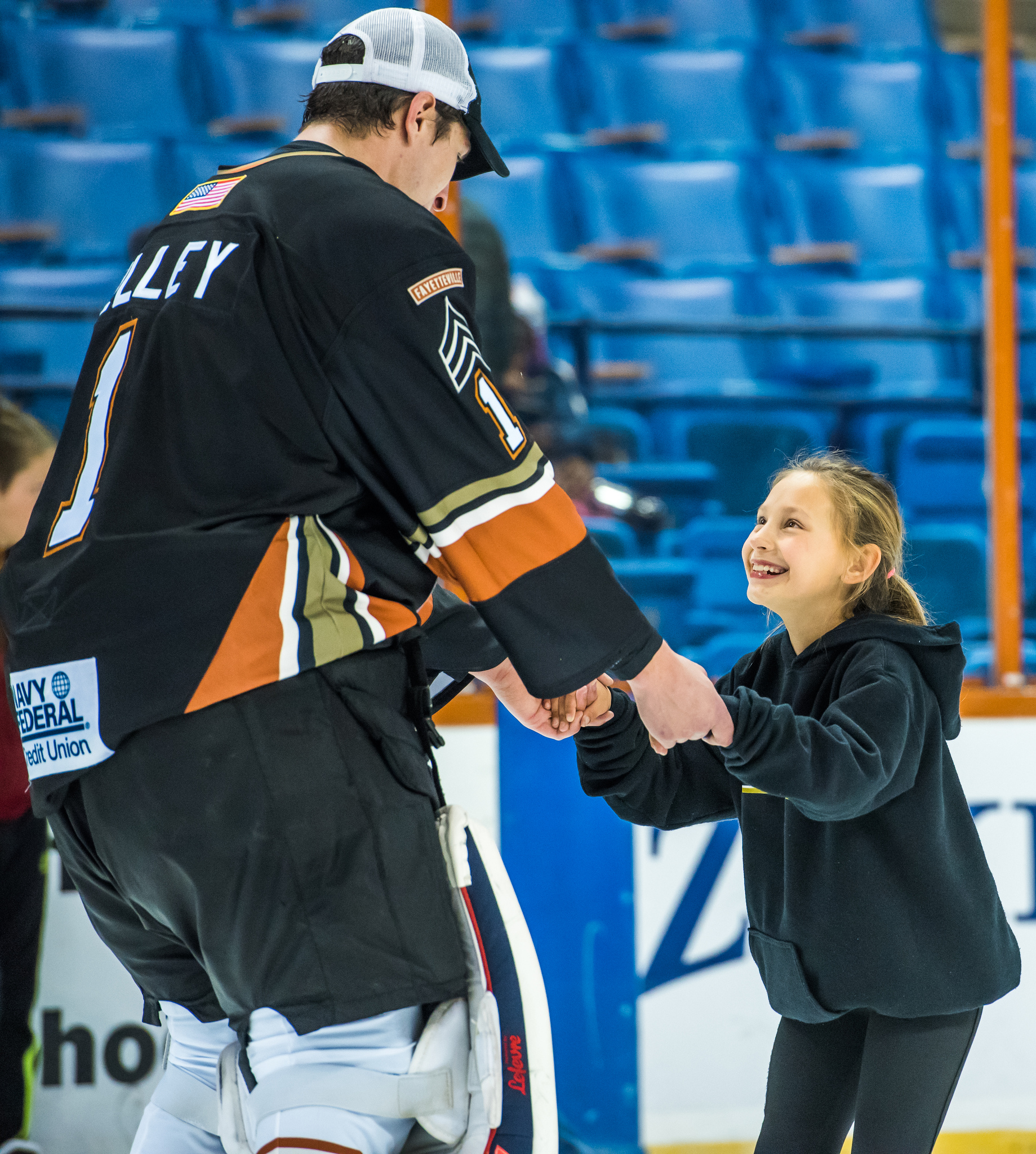 FAYETTEVILLE, N.C. – An outstanding weekend of hockey concluded with a dramatic victory for the Marksmen to finish out 2018. After falling behind 1-0 and 2-1 in Knoxville, the Marksmen crawled out of both holes to secure an overtime victory for their third straight.

This came off the heels of one of the best wins of the year for Fayetteville, where they got into a slugfest with the then-#1 Peoria Rivermen, coming up with a 1-0 victory in front of a loud Crown crowd.

The Marksmen are playing their best hockey of the season, riding their longest win-streak of the season into 2019. This directly fulfills the expectations of Head Coach Jesse Kallechy, who challenged his team to be the best in the SPHL after Christmas.

There are a lot of candidates for commendation in such a fantastic year-end effort, but we have to break it down to those who made the overall biggest impact.

After long consideration, here are our Three Stars of Week 11.

As a stingy, aggressive puck-hound defensemen, Palmer doesn’t often show up in the points department or the stat sheet all too often – though his impact is never missing.

This weekend, it was most evident.

With choking forecheck pressure from an aggressive Macon, and a crafty, pressure-built Knoxville team, goaltender Dillon Kelley was able to stop almost everything that came his way.

He wasn’t alone, as the Marksmen defense put on a solid effort on the backcheck, and were blocking shots left-and-right. Palmer was the leader of this defensive effort, and the most memorable moment came in the third period of Friday night’s game.

With a wide-open net, and Kelley out of position, Macon charged towards an open puck, that was immediately sent away by an aware effort from Palmer, who found the puck and had the know-how of where to clear it. The Crown jumped to its feet and provided the loudest cheers of nearly the entire night, knowing that this clearing effort saved the game, and all-of secured the win for the Marksmen.

On Saturday night, Palmer was seen audibly leading the team when working in the defensive end, and was an asset for the night, coming up with a +2 mark.

While four shots and a +2 on the weekend may not seem like star-worthy numbers, the best efforts don’t always come as a result of statistics. Palmer has been a consistent, solid, defensive-leader from the first drop of the puck this season, and his defensive effort has been key in leading a young defensive group.

His noticeable defensive effort was a more than necessary key to the success of the Marksmen this weekend, and heading into 2019 with a three-game win streak.

Captain Jake Hauswirth would be the first to tell you, coming into December, he wasn’t happy where he was at. With just six points through 14 games, he was looking a step behind.

Hauswirth, however, had an outstanding finish to 2018, and with his play the last six games, he’s looking at least six years younger. Through the month of December, Hauswirth has doubled his point total (now 13 points) in four less games (10 in December), coming up with SEVEN points in the final month of the year.

In the last six games, Hauswirth has accumulated five points – ALL by scoring goals.

Perhaps none bigger the entire season – or year – than his powerplay game-winner on Friday night. With a scoreless, goaltending battle deep into the third period on Friday night against the #1 team in the SPHL, the Captain delivered an absolute bombshot from the right side off of a one-timer pass from Max Cook.

This was the lone goal of the night, as Fayetteville would come away with the win 1-0, with Hauswirth taking over the heroics of the night.

2019 looks to be the Year of the Haus. Riding such a hot streak into the second-half of the season, the Captain looks ready to go to lead this team for a playoff push.

The performance displayed this weekend against two of the perennial-successors in the SPHL, was simply-put outstanding. Dillon Kelley was nearly untouchable in the two games of Week 11, and was untouchable on Friday night.

On Saturday night, Kelley was fighting against a constant shooting-gallery of Knoxville. With 34 shots-faced, Kelley came up with 32 saves between regulation and three minutes of Overtime.

Two goals against on 66 shots this weekend. 64 saves in two games. A shutout. Two wins.

The statistics speak for themselves. Dillon Kelley from the very get-go on Opening Night proved that he was more than just a rookie goaltender, and through the bumps in the road, Kelley has impressed in handling his role as the #1 goaltender for the Marksmen in 2018.

Kelley is getting help defensively, and he has shined as a goaltender in the last few games, but has been impressive and consistent through his first professional season.

2019 looks promising for the Marksmen, and DK is aging like a fine-wine as year one rolls along.