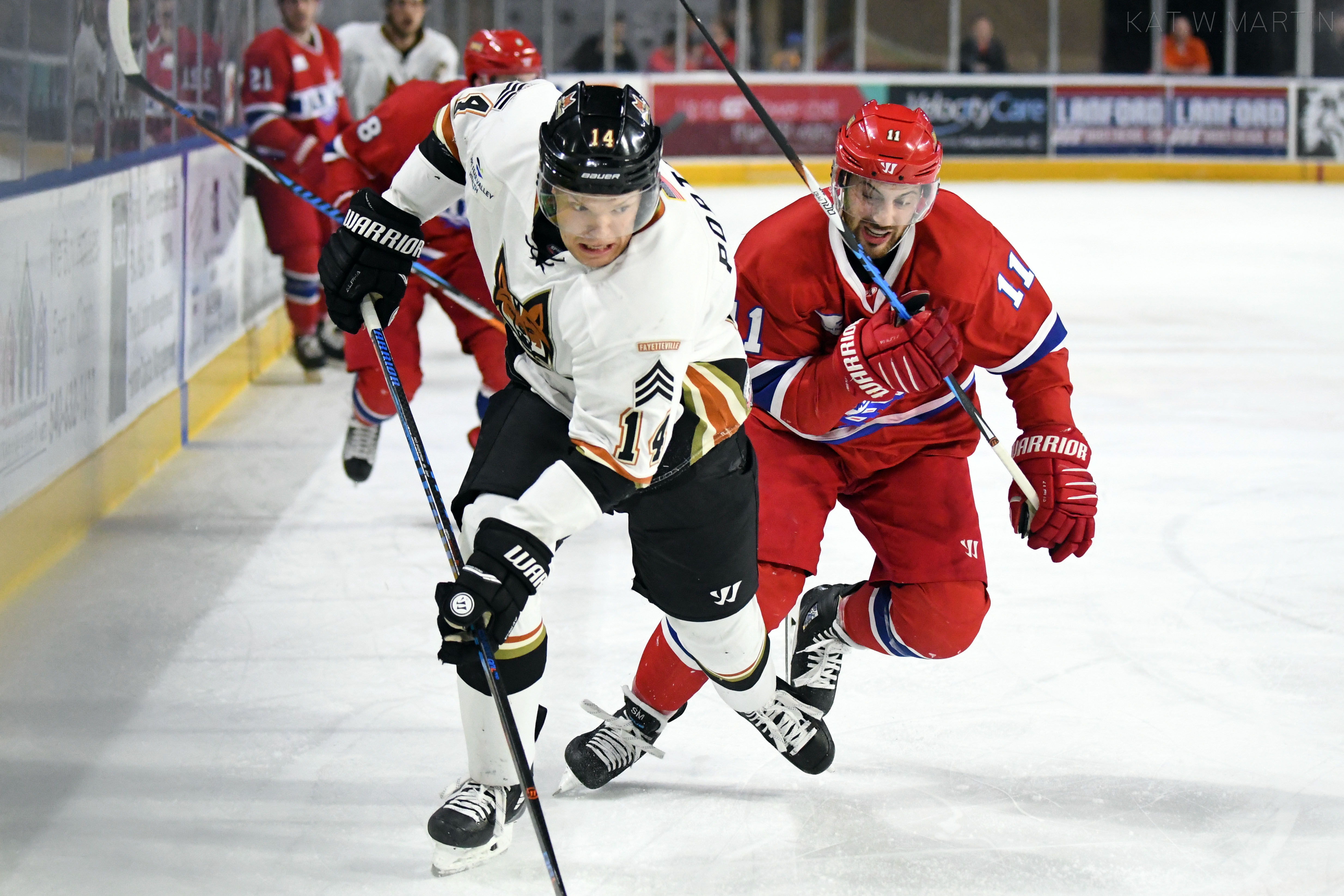 Roanoke, VA– The Fayetteville Marksmen rattled off three goals in the first 9:47 of the game but couldn’t hold back the surging Roanoke Rail Yard Dawgs, who netted four unanswered goals in route to a 5-3 victory at the Berglund Center Friday night.

Looking to impose their will in the contest, the Marksmen forced play early on and earned the game’s first tally. Junior Harris skated into the zone, deked around several Rail Yard Dawg defenders, and made a forehand-to-backhand move that pulled Matt Zenzola out of position, allowing Harris to easily deposit the puck.

Over two-minutes later, the Rail Yard Dawgs found the equalizer. Entering the zone John Gustafsson rifled a wrist shot from the right faceoff dot, tucking it just below the blocker of Patrick Spano and to the far post.

Dakota Klecha continued his hot streak since coming to Fayetteville, netting the second strike for the Marksmen. In on a two-on-one break with Jamie Hill, Hill lifted a pass to Klecha, who displayed patience and froze Zenzola, allowing him to push the puck into the empty net.

The onslaught continued for the Marksmen, making it a 3-1 game just 59-seconds later. Kirill Chaika powered a wrister from the blueline through traffic and past Zenzola. That goal spelled the end of Zenzola’s evening, having made one save on four shots.

The fifth goal of the opening frame came courtesy of the Rail Yard Dawgs, while on the power play, to make it a 3-2 game. Phil Bronner lifted an innocent-looking shot towards the net, where Steve Mele was camped out front, put the stick on the puck and deflected it past Spano.

The teams settled in through the early portion of the middle stanza, until the Marksmen earned a four-minute power play due to a high stick, near the midway point of the frame. The Marksmen generated numerous quality scoring opportunities, but couldn’t solve Brad Barone, which led to the Rail Yard Dawgs earning a chance of their own. Eric Witzel snuck into the neutral zone, took a long feed, walked in on Spano on a breakaway and tucked home a backhanded chance.

Colin Murray picked up where he left off following last night’s game and gave his team their first lead of the evening in the closing moments of the second period. Working into the zone, Murray snapped a wrister from the top of the circle and past Spano, making it 4-3.

The third period took a similar path as the middle frame, with each team taking chances through the first portion, but near the midway point of the stanza, the Rail Yard Dawgs extended their lead to two. Witzel took the puck out of the corner, walked to the slot and tucked a shot in between the post and Spano’s glove.