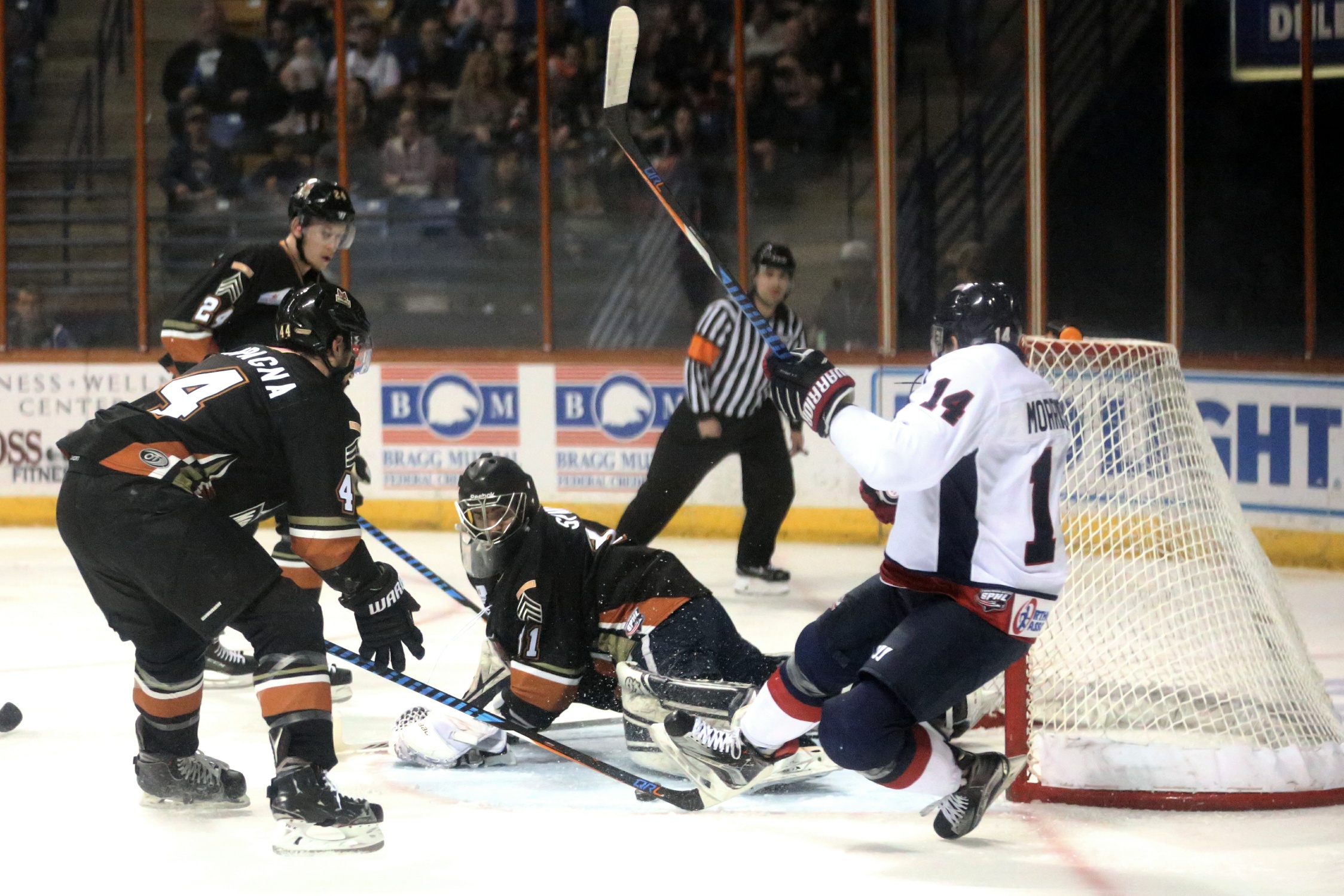 Fayetteville, NC- The Evansville Thunderbolts rode a 35 save performance by Ryan de Melo, while Carter Shinkaruk (2g, 1a) and Mike Fazio (3a) each had a three-point night, as the Thunderbolts took the 6-1 victory and swept the weekend series against the Fayetteville Marksmen at the Crown Coliseum on Sunday afternoon.

Evansville opened the scoring during their first power play of the game. With only seven seconds remaining in the man advantage, Dave Williams came out from behind the goal line and curled up the right-side along the boards. He spun around to make a pass to a wide-open Nick Lazorko, who was waiting on the goal line. Lazorko found the gap between Patrick Spano and the post, giving his team the lead 4:05 into the contest.

The Marksmen would not be held off the scoresheet for long, netting their response 4:22 later. Ludlow Harris picked up the loose puck behind the Evansville net, side stepped, and made a pass to Mitchell Meuller in the slot, who ripped a one-timer past de Melo to tie the game at one.

As the final minute of the first period approached, Evansville scored their second tally to head to the intermission with a 2-1 lead. Fazio made a pass to Cory Melker at the point, who released a shot that found its way past the bodies in front of the net, beating the glove of Spano.

The Marksmen were able to control play, and sustained pressure against the Thunderbolts for the first half of the second frame but were unable to tie the game. As the period approached the nine-minute mark, Evansville sped down the ice on a 2-on-1. Spano stopped the initial shot, and the rebound, but Shayne Morrissey broke away from the Marksmen defense in front and put a backhand shot into the net to bring the score to 3-1.

With just 13-seconds remaining in the period, the Thunderbolts extended their lead to 4-1. A failed clear off the glass was kept in the zone by Chase Nieuwendyk. He gathered the puck, skated uncontested from the blueline into the slot, and released a quick snapshot top-shelf, past Spano.

Near the mid-way point of the third stanza, Shinkaruk extended the Thunderbolts’ lead to four goals. Receiving a pass from Fazio in the neutral zone, Shinkaruk crossed the blueline, and put a wrist shot on net. The shot appeared to be harmless at first, but found its way past the glove of Spano and into the top corner, to make it a 5-1 contest.

Less than two minutes later, Evansville increased the score to 6-1 with a tic-tac-toe passing play. Morrissey made a cross-ice pass to Fazio by the right-side faceoff dot, who then found Shinkarkuk on the backdoor for the easy tap-in.