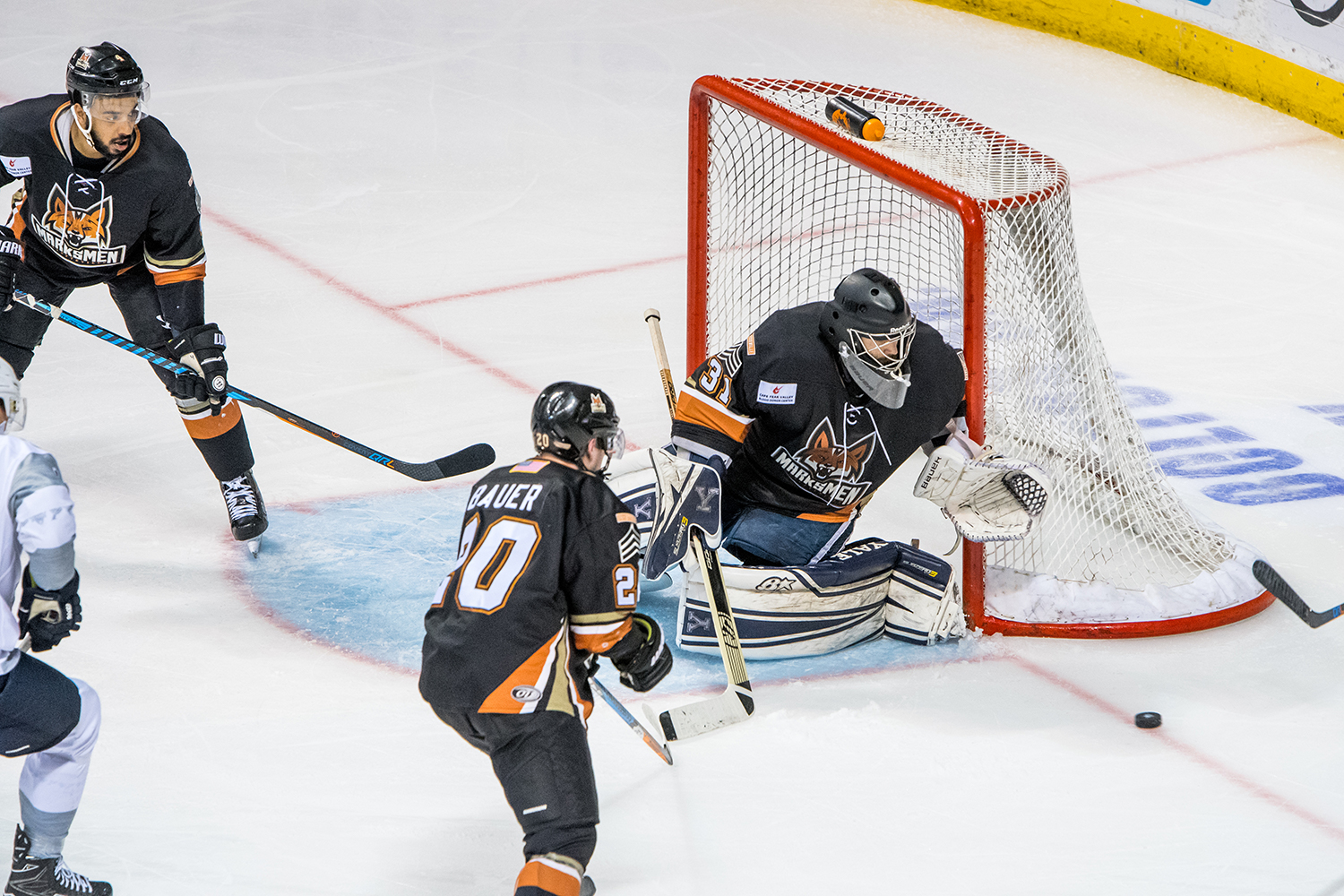 Fayetteville, NC– Powered by three power-play goals, the Evansville Thunderbolts extended the Fayetteville Marksmen’s winless streak to 12-games, with a 6-3 victory on Saturday night at the Crown Coliseum.

Patrick Spano made several acrobatic saves, keeping the game scoreless, until the Thunderbolts took the 1-0 lead 9:50 into the contest. Robbie Hall carried the puck into the zone on the left side and fed a pass to Shayne Morrissey as he entered the zone. Morrissey almost had the puck stripped away from him but was able to regain control and make a spinning pass to Nick DAvolio, who deflected a floating puck past the unsuspecting Spano.

The Marksmen responded just fifty seconds after the Thunderbolts took the lead. Jake Hauswirth made a stretch pass to Carl Greco, who would score his first professional point with an outlet pass to Jamie Hill. Hill attempted a pass to the middle on a 2-on-1, but instead would score with a deflection off a Thunderbolts defenseman. The first period would end tied at 1.

After the second period beginning with a close fourteen minutes, the Thunderbolts took the lead with a back-door power play goal from Nick Lazorko.  John Scorcia’s attempted shot towards the Marksmen net deflected off the shin pads of the players in front, landing on the stick of Lazorko, who had a wide-open net to make the game 2-1 in favor of Evansville.

Both teams would continue to battle until Carter Shinkaruk of Evansville scored their second power play goal of the game with a one-timer through the five-hole of Spano. The Marksmen would head to the locker room down 3-1.

The third period was actioned packed, beginning with a quick wrister from Tyler Palmer. The shot was too hard for Ryan de Melo to handle, as it tipped off his glove and deflected into the top corner of the net 12 seconds into the final stanza.

Mark Petaccio and the Thunderbolts responded under two minutes later with a power play one-timer to regain their two-goal lead. Dylan Clarke fed a pass into the slot where Petaccio was patiently waiting to jam the puck home.

Tensions flared between the two teams with 13:54 remaining in the third. De Melo would take exception to a Marksmen jab at the puck, causing an all-out brawl between both lines and goalies. Spano would be assessed a game misconduct for Deliberate Removal of the Helmet.

The Marksmen weren’t done yet. With 9:21 left in the tilt, Hauswirth snapped his month long goalless streak with a power play one-timer from the point. Hill gave Hauswirth a beautiful outlet pass, delivering a rocket to the back of the Thunderbolts’ net. This once again cut the lead to one.

Under 5 minutes later, Lazorko and the Thunderbolts responded and were off to the races from there. He reestablished the two-goal lead with a breakaway goal through the five-hole of Matt Leon. The onslaught continued two minutes later with a Mike Fazzio snapshot past the glove of Leon. The game came to a close with a 6-3 Marksmen defeat at the hands of the Thunderbolts.

Shinkaruk and Fazio Lead Thunderbolts Past Marksmen Scroll to top