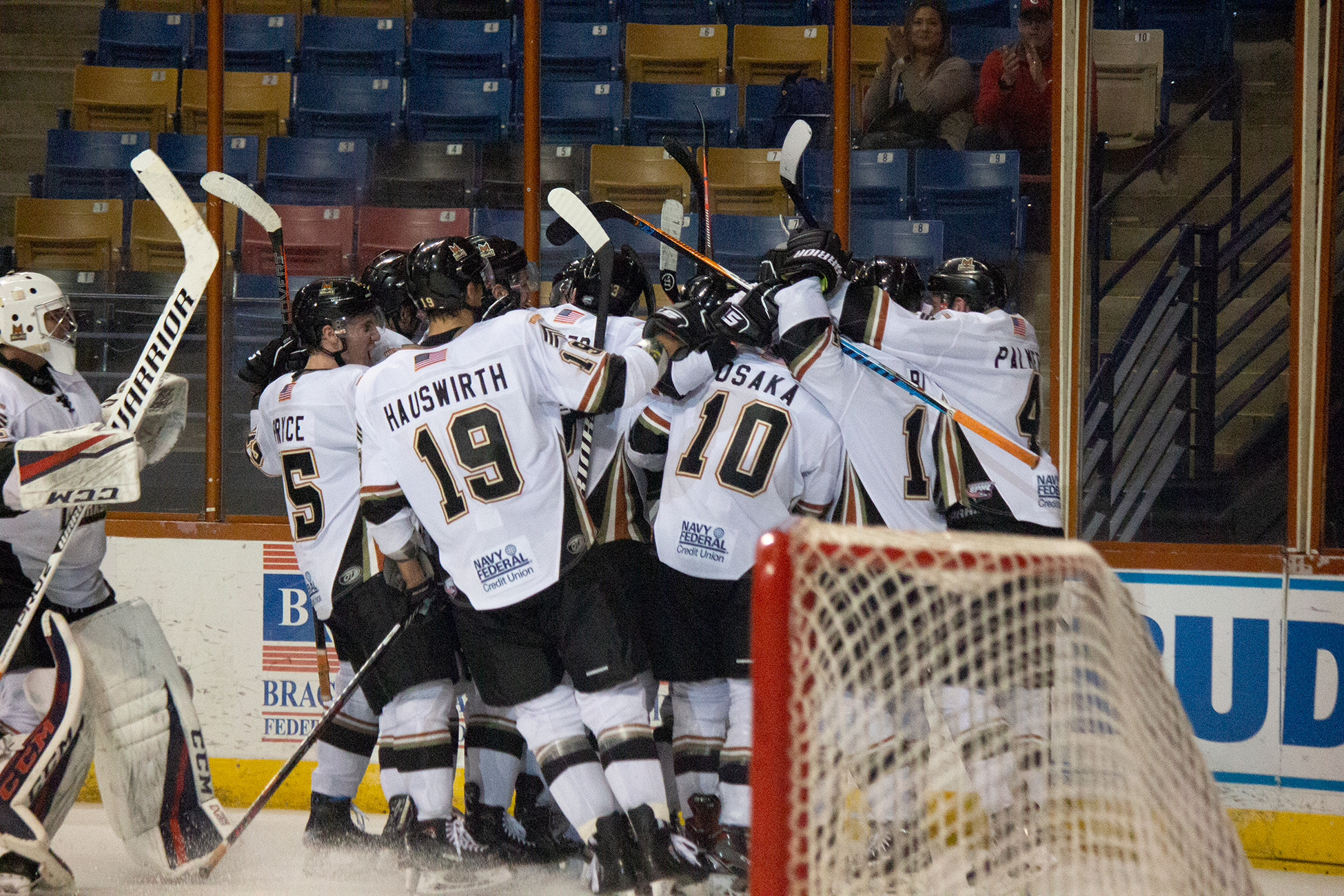 FAYETTEVILLE, N.C. – Coming off of last night’s impressive 5-2 victory against Peoria, the Marksmen entered tonight’s game full of confidence. In the tunnel before the game, you could see the Marksmen were ready for the war that they were about to enter.

The Marksmen and Rivermen both came prepared for the night of battle ahead. After a slow-starting first few minutes, Cody Brown picked up right where he left off last night, scoring his third goal of the weekend and fifth of the season from a perfect Brian Bowen pass.

Austin Vieth was sent to the box after a viscous cross-checking on Shane Bennett. Bennett stayed down briefly but fought his way back to his feet and skated to the bench. Vieth would wait in the box as his Rivermen killed off their penalty kill, then would proceed to find the back of the net, knotting the score at 1-1.

Mike Gurtler had a blood-drawing high sticking to the face of Shane Bennett, sending him to the locker room for the rest of the night, and Gurtler to the box for four minutes. Travis Jeke capitalized on that penalty and scored, giving the Marksmen a 2-1 lead going into the locker room.

As the intermission ended, the Marksmen found themselves in a similar situation as last night. With a one goal lead, the Marksmen looked to keep that lead for as long as they could. Peoria had the first seven of ten shots-on-goal to start the second period. Alec Hagaman and Nolan Sheeran were both handed slashing penalties one after another. Both teams ended up at even strength, but Austin Frank soon found the back of the net. Frank’s goal allowed the Rivermen to tie the game 2-2, heading into the third period.

With an incredibly-close game through 40 minutes, it was time to find a hero. Just minutes into the third, Kyle Thacker was called on a cross checking and found himself sitting in the box. While Thacker was in the box, Kevin Patterson scored for the Rivermen putting them up 3-2, a mark that would stand for nearly all of the period. With an incredibly loud Crowd Coliseum behind them, the Marksmen flipped the switch and began their furious comeback effort. With just over six minutes remaining in regulation, veteran Max Cook stepped up and delivered the game-tying goal that would send the crowd to their feet, and be enough to force overtime in the All-American City.

The third overtime of four meetings against the Rivermen.

As overtime began, it was do-or-die for both teams, especially knowing the two split their last two overtime efforts. Brown, Sheeran, and Jeke would start the period, and as the Marksmen would get the puck :30 into the extra frame, Brown would go off for Kielich, as Jeke set the play up behind the net. A beautiful pass from Jeke to Kielich got the two forwards past the defense, and on a two-on-one, Kielich fed a perfect pass to Sheeran. Nolan Sheeran caught the pass, and slipped the winning shot past Rivermen goaltender Phanuef. Sheeran’s game winner blew the roof off the Crown Coliseum, giving the Marksmen their first sweep of the season, pushing them into fourth place in the league, and winning the Marksmen the season series over Peoria with a 3-0-1 record.

The high will last a bit longer for Fayetteville, as they’re off in-game action until Saturday night when they host an outstanding opponent in the first-place Birmingham Bulls. On Saturday, December 8 it’s Ugly Sweater/Teddy Bear Toss Night, as the Marksmen will don their second specialty jerseys of the season and invite all fans to bring their bears to throw when we score our first of the night.

On Sunday, December 9 it’s the first Sunday Funday of the season at 3 P.M! All kids 3-12 get in for FREE with purchase of an adult ticket, and we’ll be hosting a Post-Game Skate with the players. Don’t forget about our great Old Chicago Sunday Funday Deal, where you get four Upper End Zone tickets and a Large Old Chicago Pizza for just $49 – a deal affordable for any family.

We hope to see you out here and enjoy the Marksmen brand of winning hockey.