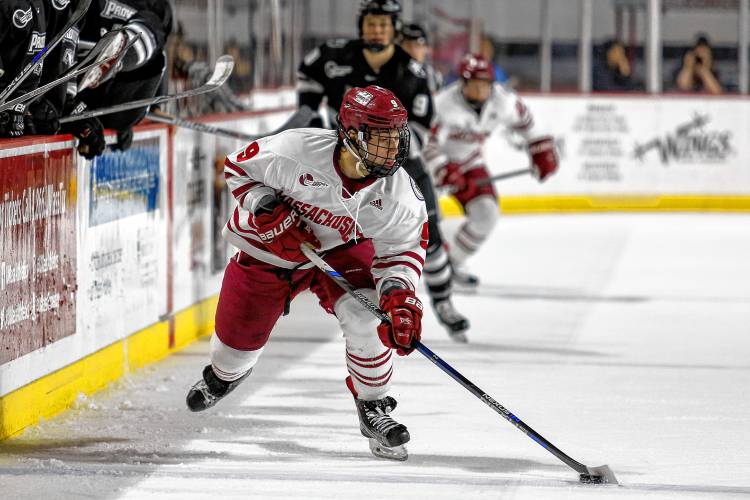 FAYETTEVILLE, N.C. – Playing at a high-level is no stranger to Anthony Petrella.

The 22-year-old Leftie from Hilton, New York found his path to the NCAA in what is considered the nontraditional way – Prep (High School) Hockey.

However, it wasn’t just suiting up for prep and seeing what happened. Petrella moved around the elite states of hockey – Midget in Michigan with the highly-touted Belle Tire U16/U18, and finally to the state where High School Hockey is bigger than pro, Minnesota.

During his high school career at what is considered – no joke – “The Hogwarts of Hockey” at Shattuck-Saint Mary’s, a school regarded for sending many alumni to the NHL and Olympics, Petrella set the ice on fire with 126 points (63G+63A) in 105 games played.

This dynamite showcase of games helped land Petrella at traditional NCAA D1 Hockey power Massachusetts (UMass Amherst), where the 5’9 forward would find 10 points (5G+5A) in 77 games. He was also named to the Hockey East All-Academic in 2016-17.

His senior year, Petrella decided to transfer down to Endicott College (NCAA D3), in keeping his love for the game strong and based on his brother’s high-recommendation for the school. The transition proved to be a beneficial one, as he would accumulate 22 points (8G+14A) in 25 games played.

The end of his collegiate career would blossom into now the start of his professional one, as he would receive a call that would accomplish a childhood dream.

“It’s always been a dream of mine to play pro hockey and I’m thankful to get another shot at playing the game I love. I picked the Marksmen because Coach Jesse called me this summer when he got the job, and seemed confident in his ability to put together a good team,” said Petrella “He seemed to be looking for a player of my style and we seemed to have similar goals. I feel I can bring a fast paced, two way, high intensity game to the team.”

For Coach Kallechy, it was Petrella’s determination and skill that drew him to the recent graduate.

“Anthony is a player who will provide a lot of skill and effort to our lineup. His history of playing at high levels shows the kind of potential that he can bring to a team looking for players ready to step up,” said Kallechy “Talking with Anthony, I knew that his skill set matched up with what I’m looking to build. I look forward to seeing him in Training Camp.”

With 44 days remaining until the SPHL season begins, the anticipation is starting to reach a fever pitch, especially as the Marksmen Camp roster starts to finalize, and the team’s exhibition against Macon has been set for October 12.

The Fayetteville Marksmen are excited to welcome Anthony Petrella to his new home for the 2018-19 season, and look forward to him being the bedrock of what promises to be an exciting season of hockey in the Cape Fear. The 2018-19 Marksmen Home Opener is October 19th against the Roanoke Rail Yard Dawgs, and Season Tickets are on sale NOW!