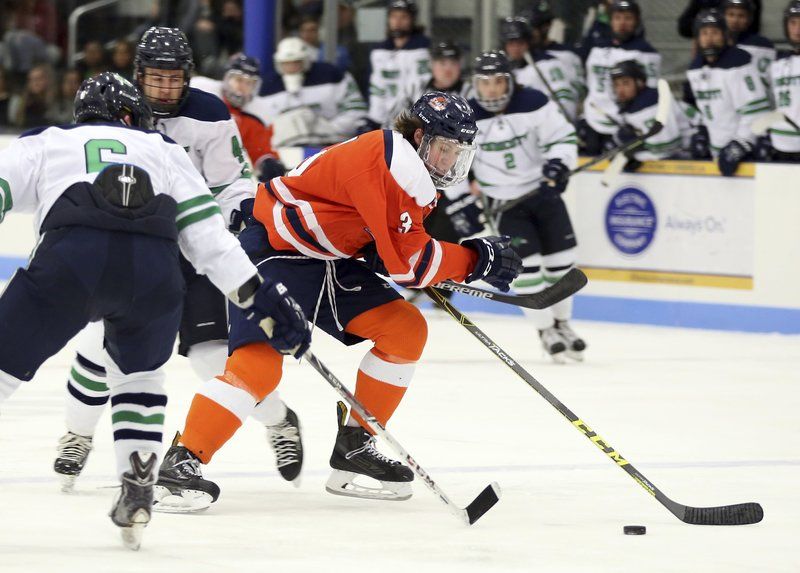 FAYETTEVILLE, N.C. – Derek Makimaa has dreamed of playing professional hockey since he fell in love with the sport at three-years-old. With his signing to a spot on the Training Camp roster, Makimaa is closer than he could’ve imagined.

The 6’2, 201 pound 24-year-old forward from Swartz Creek, Michigan spent his collegiate career at Salem State University, where he found his way to 71 points (36G+35A) in 98 games played while majoring in Sports Movement Science – Pre-Physical Therapy.

While at Salem State, Makimaa would play on the same ice as future Marksmen teammates Michael Casale (Forward) and Jason Pucciarelli (Goaltender).

“Playing alongside collegiate teammates makes it that much easier to be excited. Casale and I played a lot together in college, we compliment each other’s game very well,” said Makimaa “When Pucciarelli is in net, you play with more confidence knowing you have such a great goaltender to back you up. Both are great leaders on and off the ice.”

Previous to his NCAA career, Makimaa spent two years in the juniors, first with the Atlanta Jr. Knights (EJHL) and Bay State Breakers (USPHL Elite), where he scored 61 points (34G+27A) in 73 games.

Makimaa knew from the very first phone call that Fayetteville was the team for him.

“It’s truly a privilege and honor to be able to play at the professional level…and I’m extremely excited to be a Marksmen. Coach Kallechy called me and made me feel like family right away, the ability to connect with your players is vital,” said Makimaa “He was very confident in the squad he has put together and I’m hoping to be a big asset to the team in any way that I can.”

In terms of play-style, Makimaa’s self-described traits may sound familiar, as they’re exactly what Head Coach Jesse Kallechy has been preaching in all his signings.

“You’re going to get a blue collar, hard working, speedy forward with the ability to put the puck in the back of the net,” said Makimaa “I want to be able to help my team in any way possible to bring wins to Fayetteville and ultimately a championship.”

Head Coach Kallechy saw Makimaa as a player that had a high-ceiling and could be an immediate impact.

“Derek is a player I expect to see a lot of hustle out of. He was a consistent, solid player at Salem, and those I’ve talked to have spoken highly of him,” said Kallechy “Getting the chance to have him with a college teammate gives me the chance to see how he can play with good chemistry. I look forward to seeing him play in person.”

With 42 days remaining until the SPHL season begins, the anticipation is starting to reach a fever pitch, especially as the Marksmen Camp roster starts to finalize, and the team’s exhibition against Macon has been set for October 12.

The Fayetteville Marksmen are excited to welcome Derek Makimaa to his new home for the 2018-19 season, and look forward to him being the bedrock of what promises to be an exciting season of hockey in the Cape Fear. The 2018-19 Marksmen Home Opener is October 19th against the Roanoke Rail Yard Dawgs, and Season Tickets are on sale NOW!