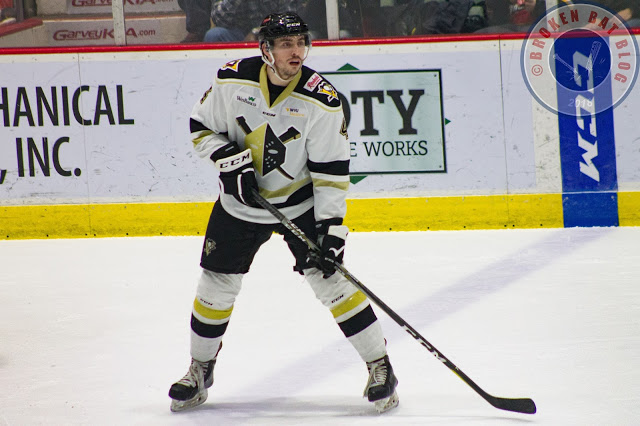 FAYETTEVILLE, N.C. – Adding the most high-level players to camp is crucial for any team in the SPHL. This has been the intention and work of first year Head Coach Jesse Kallechy all off-season; from rookies with high-level college or junior careers, to veterans from around the SPHL or ECHL.

Rookie defensemen Kyle Thacker fits right in the middle of that vision. The 25-year-old from Mississauga found himself right in the midst of four games with the ECHL’s Wheeling Nailers following his graduation from SUNY-Potsdam (NCAA DIII), and now finds himself right back in the mix as he attends camp with the newest ECHL team, the Newfoundland Growlers.

Thacker began his higher-level competitive hockey career in the OJHL, where many Marksmen Camp attendees got their start. Spending five seasons in the OJHL, Thacker saw relatively high point production as a defensemen, finishing his six-team junior career with 59 points (7G+52A) in 173 games played.

Thacker transitioned from his junior game to play at always-competitive NCAA DIII SUNYAC, for SUNY-Potsdam. Here he continued his offensive-defensive style, as he found 41 points (8G+33A) in 91 games. Thacker’s impressive collegiate career, capped by being named captain his senior season, lead to plenty of looks from ECHL teams, where he finds himself in camp currently.

Head Coach Kallechy is excited by the potential of Thacker, and what he’s shown already.

”Our offense will start at the blue line. That’s my vision, and has been a large part of the culture I want to build here. The players I’ve welcomed to camp understand and are committed to that vision,” said Kallechy “Kyle represents the play style I want from my players, and his skill and leadership will be huge in our Camp.”

The Fayetteville Marksmen are excited to welcome Kyle Thacker to his new home for the 2018-19 season, and look forward to him being the bedrock of what promises to be an exciting season of hockey in the Cape Fear. The 2018-19 Marksmen Home Opener is October 19th against the Roanoke Rail Yard Dawgs, and Opening Night tickets are on sale NOW!