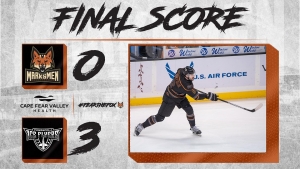 The Ice Flyers struck first on a Frederic Letourneau buzzer-beating goal that came with 0.2 seconds left on the clock. Referee Joe Genovese conferred with the goal judge and the goal was upheld.

The second period saw Brent Moran pile up saves that kept the Marksmen in the game until the very end. Moran came up with 37 saves on the evening, many of them being highlight reel worthy.

While the Marksmen pushed hard at the end, Seth Ensor iced the game with a 190-foot empty net goal.

Cody Karpinski logged 26 saves in his second shutout of the season for the Ice Flyers.

The Marksmen ended the hockey game 0-for-5 on the power play while they gave up a power play goal in the third consecutive game.

Fayetteville will remain in Pensacola tomorrow to face the Ice Flyers for the final time this regular season. Puck drop is at 6:05 p.m. eastern.

Marksmen first round playoff schedule is set Scroll to top