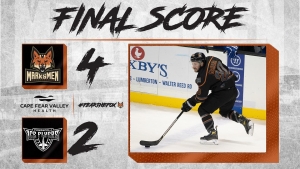 Bryan Moore opened the scoring on the power play for the Marksmen just 5:18 into the game. Moore would go on to record a Gordie Howe hat trick (a goal, a fight, and an assist) for the second time this season (Dec. 4, 2021 vs. Roanoke).

However, Pensacola would fight back with Cory Dennis scoring his first of two on the night on an Ice Flyer power play 11:14 into the first period.

Both teams would have chances on the man-advantage but neither were able to breakthrough a man up for the rest of the game. The Marksmen finished 1-for-5 on the powerplay, and the Ice Flyers finished 1-for-3.

The Marksmen would add insurance when Drake Glover found Matt McNair lurking in front off of a turnover and McNair scored to make it 3-1.

While Pensacola would get one back with the net empty, the lead was too much to overcome.

Bryan Moore found Taylor McCloy who potted an empty net goal for his 99th point as a Marksmen. The McCloy goal moves him into 4th in all-time scoring in Marksmen history, ahead of his former teammate Brian Bowen.

Jason Pawloski was sterling in night for Fayetteville logging 34 saves on 36 shots.

The Marksmen will face the Ice Flyers at the Pensacola Bay Center again tomorrow night at 8:05 p.m. eastern time.