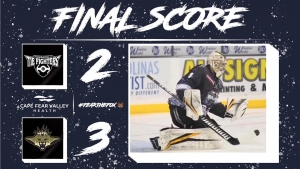 The scoring started less than 10 minutes into the game with Bryan Moore scoring on a deflection from a Vincenzo Renda shot.

While the Marksmen would carry the lead into the first period intermission, Brennan Blasczak tied the game just 1:03 into the second period with a shorthanded goal.

The Marksmen cashed in on a powerplay late in the second period with Alex Renaud scoring on a rebound in front of the net. Renaud has now notched three points on the weekend (2g, 1a).

In the third, Don Olivieri extended the Marksmen lead with his sixth goal of the season.

With a combined 13 penalties taken between the two teams, Pensacola came within one with three minutes to go on a Weiland Parrish powerplay goal.

The Marksmen are one game away from tying their season long win streak.

The two teams will meet tomorrow at 3:00 p.m. at the Crown Coliseum.