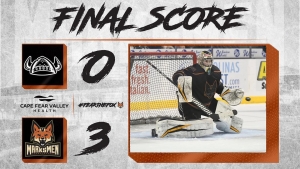 A new look Marksmen group leaped out to a fast start scoring just 3:10 into the game when Drake Glover clubbed a one-timer over the shoulder of Michael Stiliadis. Glover’s goal marks his eighth of the season and continues a scoring streak as he has scored in five of his last six games.

Matt McNair assisted on the Glover goal to take the team lead in points with 26, passing his former college teammate Taylor McCloy.

Just four minutes later, Bryan Moore tapped in a feed from Shane Bednard to extend the lead to two. The Marksmen scored two goals on their first five shots, but would be stymied by Stiliadis through most of the game.

Brent Moran earned the nod in net for the Marksmen, playing in his first professional game in North America. Moran was a gem, especially through the second period, turning away every shot he faced in a shutout effort. The Marksmen have won in shutout fashion three times now this season.

In the third period, Alex Renaud would add to an early assist with a powerplay goal set up by Taylor Best.

The Marksmen have now defeated Macon nine straight times this season, but this is the first win coming via the shutout.

Tomorrow, the Pensacola Ice Flyer roll into town for two games this weekend. The Ice Flyers have yet to face the Marksmen this season.

The Crown Coliseum will be the place to be tomorrow evening on Star Wars Night presented by the Salvation Army. Don’t forget, the first 1000 kids through the door will receive a free lightsaber! Limited tickets remain and you can get yours by skating to marksmenhockey.com and clicking the tickets tab.