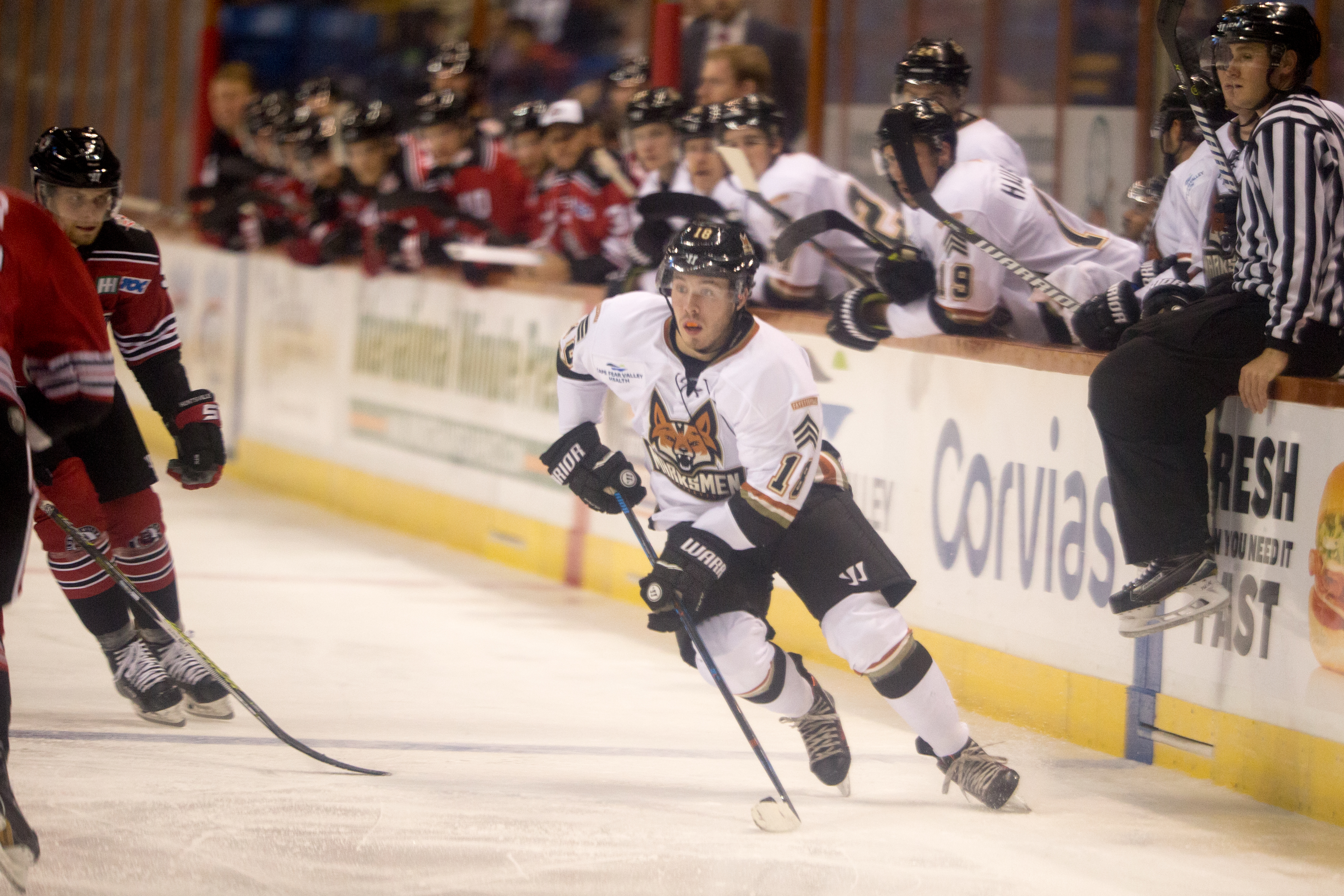 Macon, GA- Despite holding a 3-1 lead midway through the second period, the Fayetteville Marksmen couldn’t overcome the offensive power of the Macon Mayhem, falling 6-5 on Saturday night at the Macon Coliseum.

For the first time since October 28, the Marksmen struck for the game’s first goal. Just five minutes into the contest, Myles McCauley pushed a shot on Macon netminder Charlie Finn, who stopped the initial shot attempt, but couldn’t track Joe Kalisz’s backhander into the top corner.

The Mayhem pushed back to pull even late in the first frame. While flying through the zone on a two-on-one, Stephen Pierog lifted a pass to Darren McCormick, who used a forehand, backhand deke to freeze Peter Di Salvo and lifted the puck to the top corner.

While on a late power play chance, the Marksmen answered 50-seconds later, to finish the opening frame with a 2-1 lead. Shane Bennett circled around the Mayhem net, eventually finding Kalisz, who was wide open at the right faceoff dot, and roofed a howitzer past Finn.

Michael Santaguida came out to start the second period in relief of Di Salvo, who sustained an unknown ailment late in the first.

The second frame continued to favor the Marksmen through the early portion of the stanza. Off a faceoff win, Jake Hauswirth took the puck below the goal line to the left of Finn, and found John Schiavo in the slot for a one-timer to make it 3-1.

After that strike, the Mayhem woke up offensively, notching four unanswered tallies.

While working a four-on-four situation midway through the period, Pierog attempted a wraparound chance that ricocheted off the post and to the tape of Jeff Sanders who deposited the puck into the open net.

At the 15:54 mark, while on a power play, the Mayhem netted the equalizer. A point shot from the left side made its way through traffic and to Santaguida, who stopped the attempt, but couldn’t corral the rebound, allowing Daniel Echeverri to easily lift the puck up and over the outstretched netminder.

Continuing the offensive onslaught, Dylan Denomme only needed 18 seconds to give the Mayhem their first lead of the night. Ryan Salkeld forced a turnover deep in the Marksmen zone and found Denomme streaking in at the left faceoff dot for the one-time slapper, giving Macon a 4-3 edge.

The Mayhem continued to push the pace to close out the second period, and were rewarded with their fourth-straight goal of the frame. Pierog let loose a contested wrister from the right slot and found space above the blocker of Santaguida.

Midway through the third stanza, Jake Wood brought the Marksmen back to within one, with his second goal of the season. With the man-advantage, Bennett circled out of the corner with the puck, found Wood alone in the slot for the easy slapshot to the back of the net.

3:50 later, the Dennis Sicard gave his team a 6-4 lead. Racing into the Marksmen zone on a three-on-two, Daniel Gentzler touched a pass over to Sicard, who reached the blade of his stick out, deflecting the puck over Santaguida.

Less than one minute later, Schiavo tallied his second of the night to bring the Marksmen back to within one, making it a 6-5 contest. Schiavo danced around a Mayhem defender and attempted a cross-ice feed in the goal crease, but the puck caromed off a defender’s skate and into the open net.

Nick Mazzolini pulled Santaguida late in the period, in an effort to gain the equalizer but the attempt fell short and the Mayhem skated away with the 6-5 victory.

Game Notes: Bennett recorded a career-high three assists. Kalisz netted his first two goals of the season. Di Salvo stopped 12 of the 13 shots he faced prior to leaving the game. Santaguida turned away 17 of the 22 he saw in two periods of action. Hauswirth is on a three-game point streak, and has failed to register a point in only two games this season.