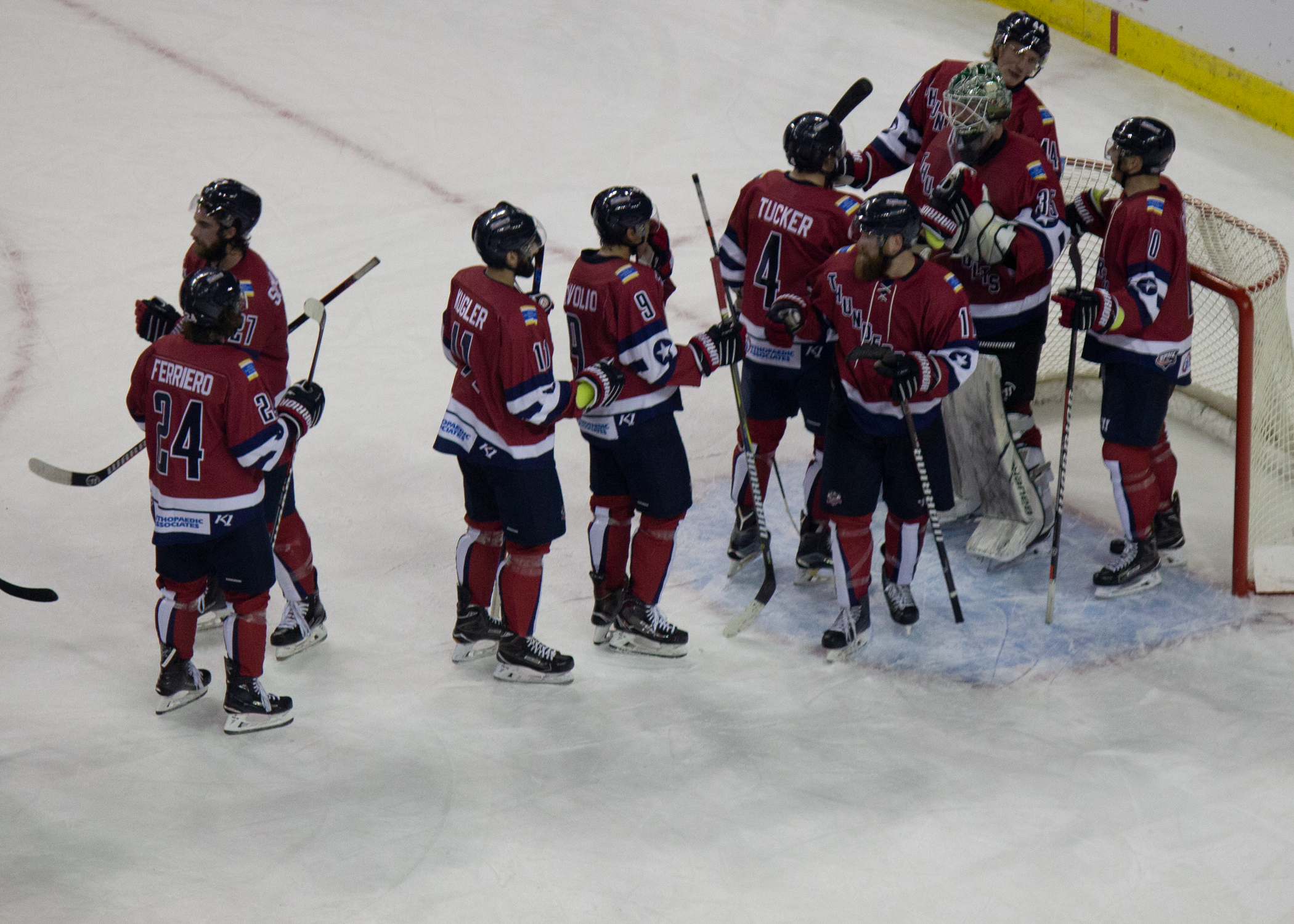 EVANSVILLE, IN – After a tough homestand against the first-place Macon Mayhem, Fayetteville was looking to return to the win column against last place Evansville. With a strong 5-0 win against a fierce Knoxville team to end last week, the Thunderbolts had other plans.

The opening minutes of play saw a solid back-and-forth contest between the Marksmen and Thunderbolts. However, much like all season the Marksmen found themselves trailing early as Thunderbolts Shayne Morrissey snuck one past the right leg pad of Marksmen goalie Dillon Kelley. Morrissey’s fourth goal of the season would be far from his first of the night.

Fayetteville was relentless, however, as Taylor Pryce managed to find the back of the net as Evansville goaltender Ed Minney’s net was swarmed by Marksmen jerseys. That goal by Pryce tied the game at 1-1, and gave Pryce his second of the season.

With 44.1 seconds left in the first, Shane Morrissey got his second goal of the game after a rather confusing play. Fayetteville was called for a boarding penalty, giving the Bolts a delayed power play. Morrissey fired a backhander that immediately hit the net and came out, looking like it dinged the crossbar, It took a few moments of confusion until the referees convened, and counted the goal against the Marksmen. That goal put a damper on what was an otherwise solid opening period, as Fayetteville would trail 2-1.

As the second period began, the Marksmen wasted no time attacking the net. Nolan Sheeran had a beautiful shot-on-goal but was denied. Cody Brown was sent to the penalty box, just as soon as Brown got comfortable in the box his teammate Kyle Thacker got the call and joined him. The Marksmen were temporarily on a 5-3 penalty kill. The Marksmen once again showed why they are one of the best on the penalty killing unites, killing off yet another power play.

John Schiavo of the Thunderbolts got one past Dillon Kelley a few minutes later, giving the Bolts a 3-1 lead. As it seemed Evansville could start to apply the pressure, Taylor Pryce continued to give his Marksmen life. Pryce scored his second goal of the night on a Marksmen power play, closing the lead by one, and ending the period at 3-2.

As the third period began, the Marksmen were once again behind, and the comeback kids had to play their hearts out. The Marksmen did just that, attacking the net like a pack of wolves. Unfortunately, Shane Morrissey put the puck in the back of the Marksmen net, giving him a hat-trick. Just when the Marksmen were knocked down, the Bolts decided to kick them while they were down as Ben Owen scored a routine-shot from the blue line. That goal was the first of Owen’s SPHL career, giving the Bolts a 5-2 lead.

Just when it appeared the game was all but done, Carl Greco set up a perfect pass to Joe Osaka to crash the net and score. That goal was the first for Osaka since signing his full-time contract with the Marksmen, and his third of the season. Osaka’s goal put the Marksmen within two with 12:21 to go, and putting life into the lungs.

Despite that goal, which would be the final of the game, the Marksmen couldn’t rally and fell 5-3 to the Thunderbolts. Fayetteville falls to 2-4, and the Bolts improved to 2-5.

Fayetteville will have to have a short-term memory, as they load the bus toward Peoria and a two-game weekend in Illinois. Peoria is one of the SPHL’s top teams again this year, and will prove to be one of the toughest tests of the young Marksmen season.

Join our friends at On-After Sports Bar & Grub, our home away from home, to watch tomorrow’s game amongst fans and Marksmen staff. If you can’t make it out to On-After, you can listen live on the Marksmen Radio Network with the Voice of the Marksmen, Shawn Bednard. Puck drop is at 8:15 EST.

Perennial Powers ahead for Marksmen on Longest Road Trip of Season