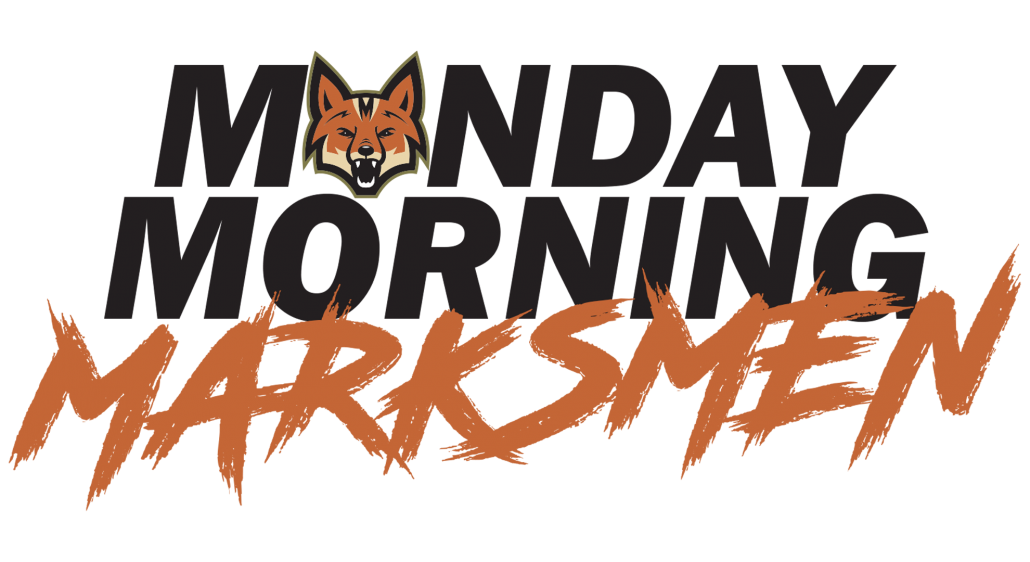 If you don’t know me yet, my name is Drew Blevins and I’m the team’s play-by-play voice and director of communication. At some point this season, look up under the west arena ribbon board, I’ll be there!

Monday Morning Marksmen is our new blog series that I’m privileged to bring to you from an unfiltered perspective from each weekend’s set of games. You’ll be able to read along with the team’s adventures and hopefully I can give you some insight into Marksmen hockey that you may not have had before.

I want to share one of the coolest parts of my job and something that fascinates me about the hockey community that was on display this weekend.

Upon arriving at the Pelham Civic Center on Friday morning, I was greeted by name by faces I hadn’t seen in almost 8 months—from the visiting team. David Nippard and Marvin Powell were players I had covered in the FPHL last season and for them to take a moment after their morning skate and say hello was rather special.

The Marksmen have that unique connection too. In talking with defenseman Harrison Harper last weekend, he shared with me that the team felt like they had been playing together for years and not months. That’s a special bond in a league that sees tons of turnover in players, and one this Marksmen group has used to their advantage.

If you walk by a group of players on this team it sounds like coded language with guys greeting others by their nickname—smiling and joking the whole time.

On the ice Friday, the Marksmen used a Taylor McCloy hat trick to propel themselves to a 6-2 win. It was interesting, McCloy had been high-energy in morning skate and couldn’t miss Friday or Saturday it seemed.

The Marksmen continued their offensive barrage on Saturday in the first period zipping out to a 4-1 advantage before allowing seven of the final eight goals in the game and falling to Birmingham 8-5.

It’s also rough to lose before getting on the bus to go home. It makes the ride quiet and uncomfortable, a staunch split from the raucousness after Friday’s win.

I thought head coach Cory Melkert summed it up rather nicely in his pre-game interview Saturday saying, “I thought we could have been a lot better [in Friday’s win].” There’s more deep-cutting truth in that statement after seeing Saturday’s result.

That somber bus ride to Georgia didn’t do much for anyone either.

Minor league hockey is a grind. Bleary-eyed and in some cases ornery, the Marksmen unloaded their bags at 2:57 a.m. into the Macon Coliseum, loaded back on the bus and headed to the hotel for the night.

Sunday games are weird to begin with. You play in the mid-to-late afternoon, the routine begins earlier and coupling that with the quick-hit travel, the recipe for a lackluster game was well in place.

The effort to mitigate that began upon arrival at the arena with a 2:00 p.m. closed-door team meeting. Coach’s ringing Canadian accent didn’t get the memo, as I hung on every word echoing down the locker room hallway. I’m lucky, I have a good rapport with the coaching staff, and it wouldn’t be fair to share words that were meant to stay internal—but it was a fiery challenge that ignited another strong opening frame.

Both Wyatt Noskey and Bryce Ferrell scored and assisted on each other’s goals—their first pro points. Carlos Fornaris would add another in the opening frame to mark the fourth straight game the Marksmen have scored three or more in the opening period. And while Macon did scratch across one, the Marksmen battled through their second-consecutive three-game weekend to win 3-1 over the Mayhem.

Before I end this post, I did want to address one comment I saw from a passionate Marksmen fan about this weekend’s broadcasts. Her concern was that as the Marksmen radio and TV voice, I was “too excited” when the opponent scored.

First of all, thanks for listening and watching! Second of all, I think it’s part of my job to make people feel that way. As a storyteller, I want to bring you the joy of the Marksmen success and unfortunately, the opposite side is bringing you the heartbreak of defeat when things don’t go Fayetteville’s way.

I like what John Forslund, the Seattle Kraken’s play-by-play voice said, “I don’t sell down moments.” And neither do I.

This crazy world of sports is fun, fast-paced and entertaining. That emotional rollercoaster is what we’re striving to bring to our wonderful followers every single day—and what a ride it will be.

It’s an experience, and it’s breathtaking—and the only thing we can call it is Marksmen hockey.

Marksmen use big first to score third win over Macon