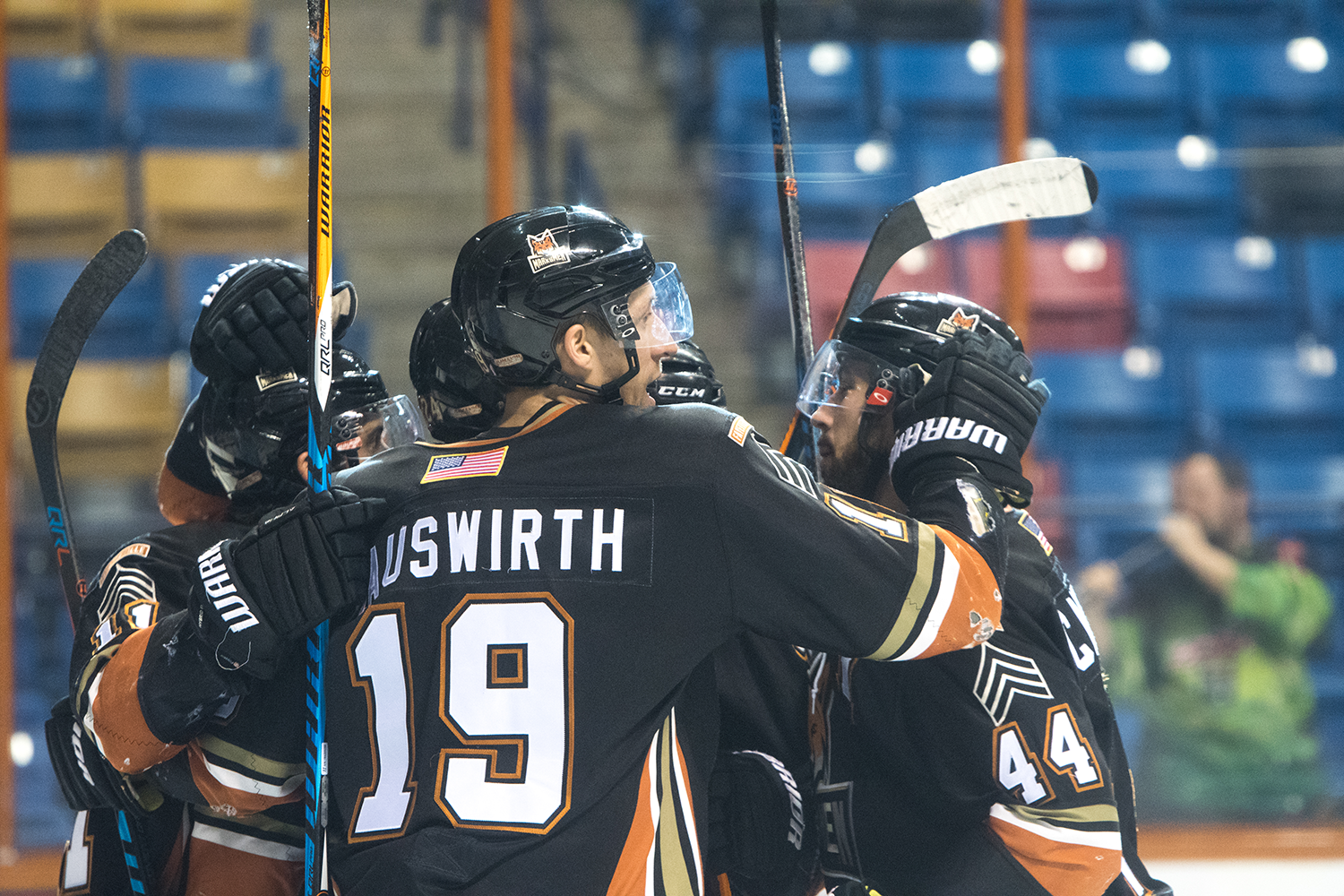 The lone goal of the opening frame came 4:02 after puck drop, with Fayetteville on the power play. Berkley Scott took the initial shot from the left side, with Patrick Spano challenging the chance out of his crease. The rebound kicked out hard into the slot, and David Brancik put home a quick shot on the far side before Spano could get across the net.

The Marksmen came out firing on all cylinders to start the second period and even the game up at 1-1. Hauswirth blocked an Ice Bear shot, then proceeded down the ice on a 2-on-1 break with Tommy Fiorentino. Hauswirth made a saucer pass to Fiorentino, redirecting the puck past Knoxville netminder Zoltan Hentenyi. With the primary assis, Hauswirth earned his 200th SPHL career point.

At the 3:30 mark, Fiorentino scored his second goal of the night, to give the Marksmen their first lead. Ludlow Harris made a pass from the corner to a wide open Fiorentino, positioned at the top of the right faceoff circle. Fiorentino sent a soft wrister through the wickets of Hentenyi to put the Marksmen up 2-1.

The Marksmen continued to put the biscuit in the basket with Carl Greco’s first professional goal just 58 seconds later. Greco attempted to dump the puck in to the Knoxville zone when the puck caromed off the boards and in to the back of the net.

After a series of Marksmen penalties, the Ice Bears capitalized. At 4:32, Eliot Grauer received a pass from Stefan Brucato. Grauer, all alone in the slot, fired a one-timer passed the glove of Spano, making it a 3-2 contest.

With two minutes remaining in the second period, Grauer scored his second powerplay goal. Alex Adams made a pass to Berkley Scott from behind the net, who then passed to Grauer for a tick-tac-toe goal, making it a 3-3 game after two periods of play.

The Marksmen began the third period with a vengeance. Just 1:53 into the final frame, Paul Russell came screaming down the left side with the puck. Russell snapped a wrister through the five-hole of Hentenyi, to give the Marksmen the lead for good.

With 14:02 remaining in the third, Hauswirth buried his first goal and second point of the night. Troy Henley’s shot from the point was blocked but dribbled over to Ludlow Harris. Harris attempted another shot which was blocked over to Hauswirth. He buried the puck short side, giving the Marksmen breathing room.

The tilt was far from over, when Brucato flipped the puck past Spano with an extra man advantage. A crowd of Ice Bears swarmed the Marksmen net with Hentenyi pulled. Brucato found the loose puck and backhanded it in to the net.

The Ice Bears pulled Hentenyi once again to gain the man advantage with 1:45 remaining. Fiorentino, looking for a hat trick, made the unselfish pass down the ice to Harris. Harris then made a pass to Anthony Flaherty, whose shot was blocked but managed to squirt over to the open Hauswirth. Hauswirth rushed the empty Knoxville net and buried the puck, reestablishing the two-goal lead with 32.5 seconds remaining, and seal the game.