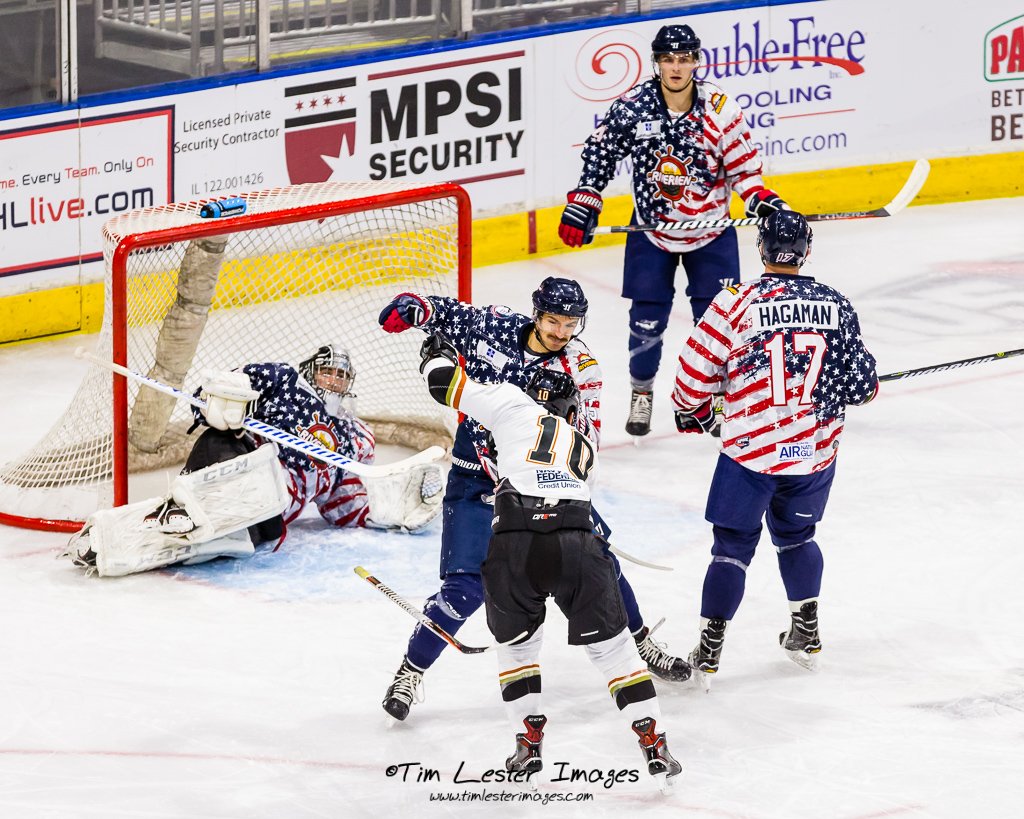 PEORIA, IL – Not leaving the Midwest without a win was the mentality of the Marksmen on Saturday night. Coming away with a disappointing point after Friday’s collapse, one word was very specifically in the mind of the team: Finish.

Fayetteville would once again find a strong start in the game, as Joe Osaka would strike first blood in the low-slot. He would be caught in a skirmish following the goal, and the Marksmen would come away with a power play on the other side of their 1-0 lead. However, unlike the previous night, the Marksmen would not have a chance to build up their lead.

Minutes later in the first, Rivermen Captain Alec Hagaman found the back of the net, tying the game up. David Mazurek was sent to the penalty box for the second time of the period, this time for high sticking. Peoria capitalized on the Marksmen penalty as Mark Petaccio scored, giving the Rivermen the early lead, 2-1. This would hold heading into the locker room after 20.

The second period would start with the Marksmen on a full two-minute power play, and just :35 into the period, David Mazurek corrected his first period woes as he scored his fifth goal of the season, tying the game at 2. Joseph Widmar was handed a goaltender interface penalty, putting the Marksmen on the power play.

Peoria would work to get the lead back off the stick of goalscorer Joe Kalisz, sneaking one past Alex Murray on the Rivermen power play. Later on, down one, Marksmen rookie Mike Casale would finally get the scoring money off his back, as he would send it in off a hot shot to even things at three. A close game after 40, the teams headed to the locker room 3-3.

As the third period began, the tight battle brought a high-tension atmosphere into Carver Arena. Taylor Pryce stepped up and delivered for the Marksmen, finding the net for his third of the weekend. Pryce’s goal put the Marksmen in the lead, 4-3. Desperate for an insurance goal, and to theoretically put the game away, Michael Casale off of a mad rush from the Marksmen offense would score to make it 5-3.

With just minutes left, it was desperation mode for the regulation-lossless Rivermen. Will Smith, after a two goal Friday night, would bring the game within one in the final few minutes. With the goalie pulled, and less than a minute to go in the game, Captain Alec Hagaman would send the crowd ballistic, tying things up at five after the Marksmen looked like they might escape with the win.

An overtime dominated by offensive zone possession from Peoria, would see just a couple opportunities for the Marksmen. With time running down, it looked like both teams were content heading to the shootout. Save one player.

With 14 seconds left, McCormick would lead a solo rush up the ice, and despite losing the puck to both the Rivermen defense at center ice, and the Peoria goaltender, McCormick would hail-mary a shot on net with 0.9 seconds left, that would hit twine with 0.2 left to stun the Carver Arena crowd, and steal the win for Fayetteville.

They leave with three of six possible points on the weekend, and three of four in Peoria. A huge win for Fayetteville, and a sign of how much growth the franchise is experiencing heading into the home weekend.