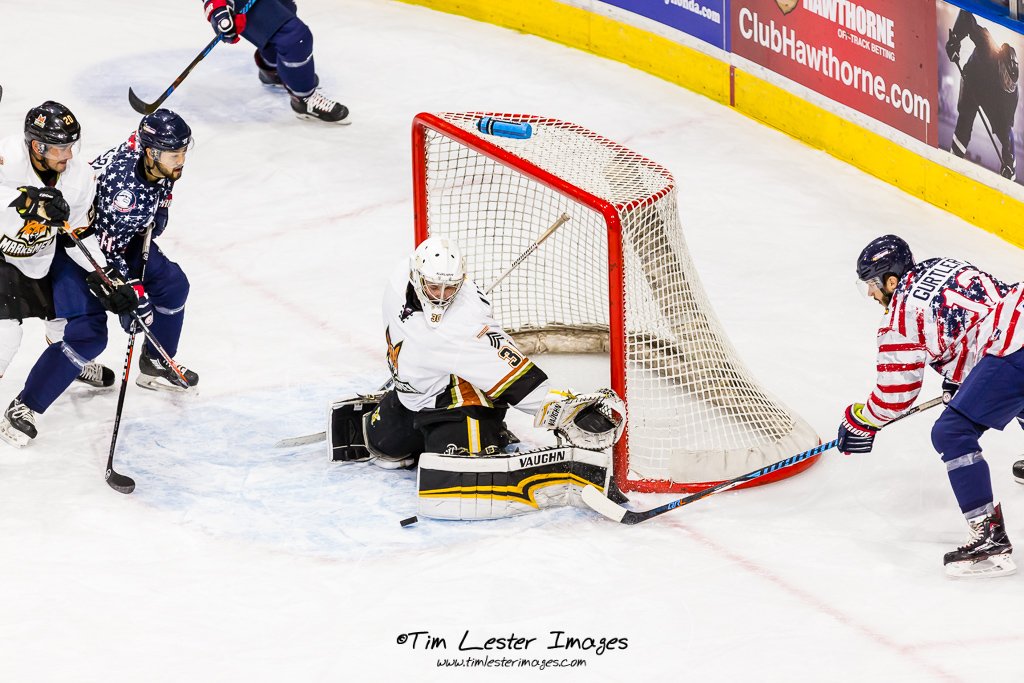 FAYETTEVILLE, N.C. – In the longest road trip of the season, against two high-level playoff teams from last year, Fayetteville came away with three of six possible points.

While the Marksmen were looking to come away with at least one more point, to be able to take a win and a point in Peoria, the league runner-ups the last three years, is massive for the legitimacy of the changing tide of the team.

Fayetteville returns home this weekend with a 3-4-1 record, and standing at fifth place in the SPHL. With a huge road weekend out of the way, and taking half the points they could, here’s three stars who made sure this trip was a successful one for Fayetteville.

93 shots-faced and 82 saves later, Murray helped the Marksmen come away with three out of four points in Carver Arena. This was an immense task for Murray and the Marksmen, but they leave with almost all the possible points they could.

Murray has faced nothing but the best to start his 2018-2019 campaign, after debuting against Macon the week prior. Through the first 39.5 minutes of Friday night’s game in Peoria, he was an absolute brick wall, having nearly 20 saves before the period ended. There were many times Murr had to step up and block big shots, and he delivered.

Marksmen Head Coach, and former SPHL goaltender, Jesse Kallechy believes in one philosophy with his goaltending core of Kelley and Murray; they don’t have to win too many games, but they can’t lose games for Fayetteville.

Murray definitely helped win these games against an unstoppable shooting force in Peoria, and earned his first professional hockey win on Saturday night, giving Kelley a much needed rest and the Marksmen three much needed points.

Taylor Pryce had a weekend to remember in the Midwest, as he would break out of a point drought. Pryce came into the weekend’s contests with just one point this season, off of a goal. He returned to Fayetteville with six next to his name, after a five point weekend.

On Thursday night in Evansville, Pryce was the lone spark plug for Fayetteville, finding himself two goals to triple his season total. Heading to Peoria, on Friday night he would just come up with an assist, as he would save his point scoring for the grand finale Saturday.

Saturday night, in another shoot-out in Peoria, Pryce would come up with a goal and an assist enroute to a Marksmen victory.

Pryce has been an impressive offensive tool in terms of puck movement and possession heading into the weekend, but he comes out of the weekend as the hottest scorer for Fayetteville.

After a 30 game season last year in Mississippi, Pryce had just seven points to show for it. Pryce has nearly matched that just seven games played into the season for himself.

Watch out for Pryce to keep things going this weekend as he welcomes Knoxville and Roanoke to town.

What else can be said about McCormick. He’s already earned honors as the SPHL player of the week in week two, and has been an absolute scoring phenom in his second-season in Fayetteville.

Darren McCormick finished this weekend with two goals and an assist to raise his point total to nine total. That’s over a point a game.

More than anything, you should know why Darren McCormick is number one on this list.

We will waste NO further time in showing you the GAME-WINNING BUZZER BEATER from @D_Mick_C_93 to win it for us 6-5 in OT at Peoria. Absolute magic with 0.2 on the clock. #FearTheFox🦊 @ESPNAssignDesk pic.twitter.com/KNA6DmLIDW

With literally NO time left on the clock in overtime, McCormick fired a Hail Mary shot towards the Rivermen net with under a second left, to score with .2 on the clock, and give the Marksmen a massive win in Peoria.

This was McCormick’s second Game-Winning Goal of the season, and secured a three point weekend for the squad.

With the goal, McCormick earned his 50th point of his professional hockey career.

The story has been the same all season for Darren, as scoring has been anything but a problem for him. He faces Roanoke on Saturday, scoring a Hat Trick last time he played them.

Voice of the Marksmen Launches “Goals Against Diabetes” Scroll to top