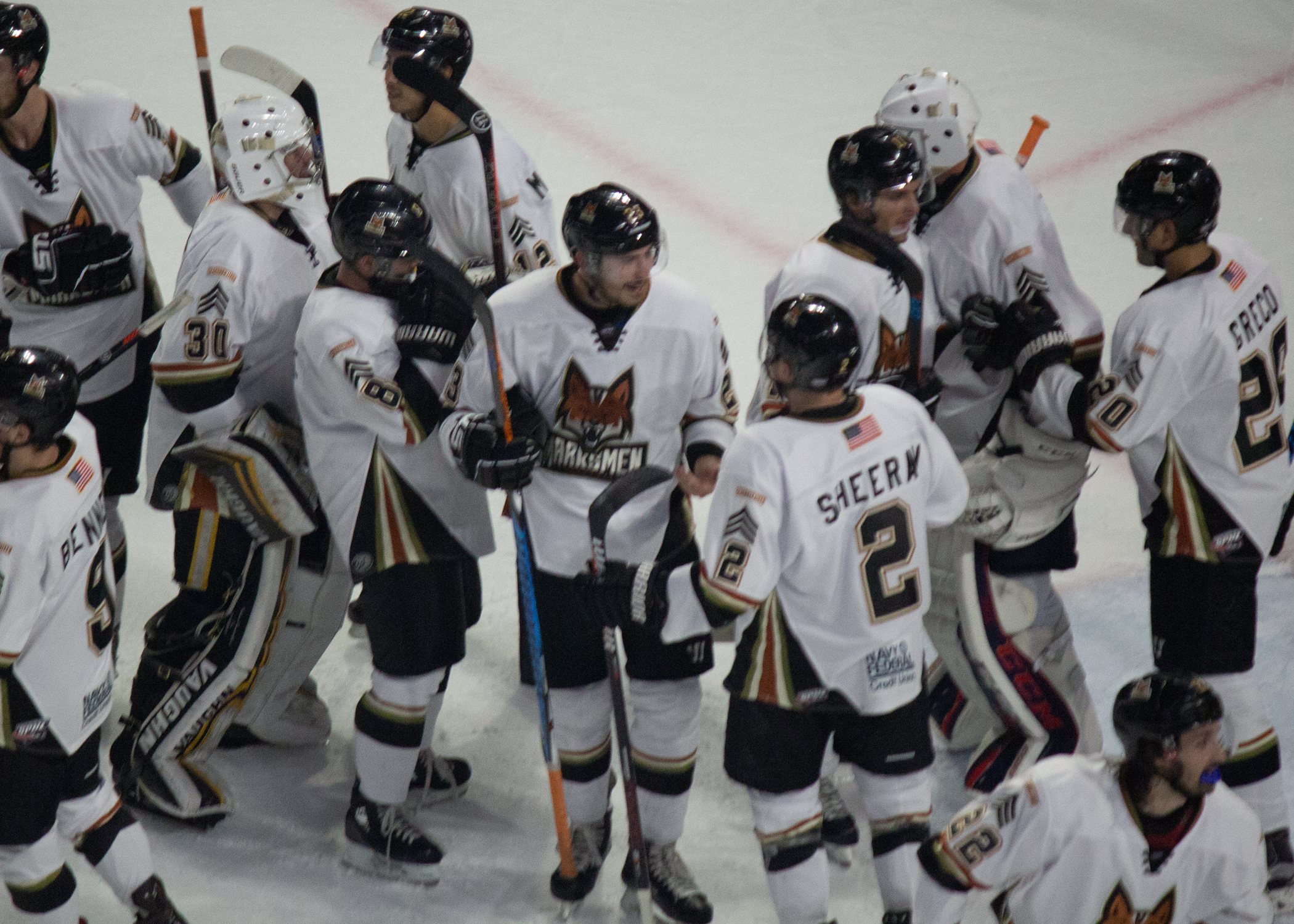 As the Marksmen entered the Berglund Center for their second away game of the season, they looked to improve on their second period woes. This game proved to be one in which the rookies shined. After two impressive games against Roanoke and Macon, Dillon Kelley found himself having yet another start in the crease racking up 33 saves. Nolan Sheeran and Michael Casale both picked up their first pro goals in the SPHL. Joe Osaka also picked up his first two goals of his career. Darren McCormick refused to let the rookies have all the fun tonight as McCormick picked himself up a hat-trick.

Carl Greco had the first shot-on-goal for the game. Darren McCormick was called on an interference penalty early in the first period. That penalty gave the Dawgs an early power play, however that didn’t last long as Paul Fregeau got tripped and that made it 4-on-4 play. While on the 4-on-4 play Roanoke’s Ben Bauer scored giving the Dawgs a 1-0 lead. That lead didn’t last long, as the Marksmen were on a 5-on-3 power play when Nolan Sheeran had a beautiful one-timer into the net for his first career pro goal. Roanoke’s Eric Witzel was called on a slashing penalty which put the Marksmen back on a 5-on-3 power play. The Marksmen have come out of the tunnel swinging for the fences against their rivals.

Michael Casale and Patrick Harrison traded blows in a fight that saw Casale knock Harrison’s helmet clean off his head. Harrison was deemed the victor of the scuffle but Casale certainly left a lasting impression on Patrick Harrison. Joe Osaka snuck a goal threw the legs of Roanoke Goaltender Brad Barone, for his first pro goal as well. Marksmen Captain Jake Hauswirth was called on a hooking penalty putting the Dawgs on a power play. That power play allowed Cody Dion of the Dawgs to sneak one past Dillon Kelley, evening the score at 2-2. On another power play for the Dawgs, Roanoke scored yet again giving them a 3-2 lead in the first period. With about 2:33 left in the first period, Dillon Kelley stopped a huge breakaway for the Dawgs. Paul Fregeau was called on a slashing penalty, giving the Dawgs yet another power play.

Shane Bennett was called on a hooking penalty putting the Marksmen on another penalty killer. Just before the half way mark in the game, Darren McCormick scored his second goal of the season.  With that goal, the Marksmen crawl out of their foxes den and even the score up 4-4. For the fifth time so far, the Marksmen once again were placed on a power play. Joe Osaka makes a huge impact in his final game on his three game tryout, scoring once again for the Marksmen. That second goal from Osaka puts the Marksmen up 5-4.

McCormick wasn’t the only one with a hat-trick as Joe Osaka picked himself up a Gordie Howe hat-trick as chaos ensued behind the Dawgs net. Osaka, not wanting to fight originally but Roanoke Captain Steve Mele picked a fight. Unfortunately for Mele, Osaka threw him to the ground in dominating fashion. Both Osaka and Mele were thrown from the game. Dillon Kelley had 33 saves in the night and did enough in the net to get the win for the Marksmen.

Going into tonight’s game we knew it would be a great game but we never expected anything like we saw. You don’t want to miss our next two games Nov. 2nd and 3rd against the Macon Mayhem in the Crown Coliseum.

The Marksmen are back home on Friday, November 2 for Haunted Hockey, and Saturday, November 3 for Military Appreciation. Tickets are available now by calling the Marksmen office at (910) 321-0123!

How To Watch/Listen/Follow Today’s Game at Roanoke