Marksmen return from break with a bang 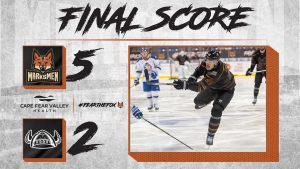 After a scoreless first period, Alex Renaud scored just 25 seconds into the second period. Both Tanner Froese and Shane Bednard assisted on the goal, scoring points in their first game back from trips to the I.R.

After a missed chance on a Marksmen powerplay, Cody Rodgers collected the puck at the blue line and blasted a slapshot into the back of the net. The goal kicked off a streak of three goals in 55 seconds between the two teams.

Bryce Ferrell scored his fourth goal of the season 29 seconds after Rodgers goal. Paul Fregeau assisted in his team debut this season and Tyson Kirkby also added a helper on the goal.

24 seconds after Ferrell’s goal, Chase DiBari used a screen in front of Jason Pawloksi to score on a seeing-eye wrist shot from the top of the faceoff circles.

As things got chippy down the stretch, Shane Bednard scored on the powerplay after a major penalty taken by Taylor Cutting.

The 5-2 win marks the sixth straight win the Marksmen have earned over the Mayhem this season.

Fayetteville will head further west overnight to square off with the Birmingham Bulls on Friday and Saturday.