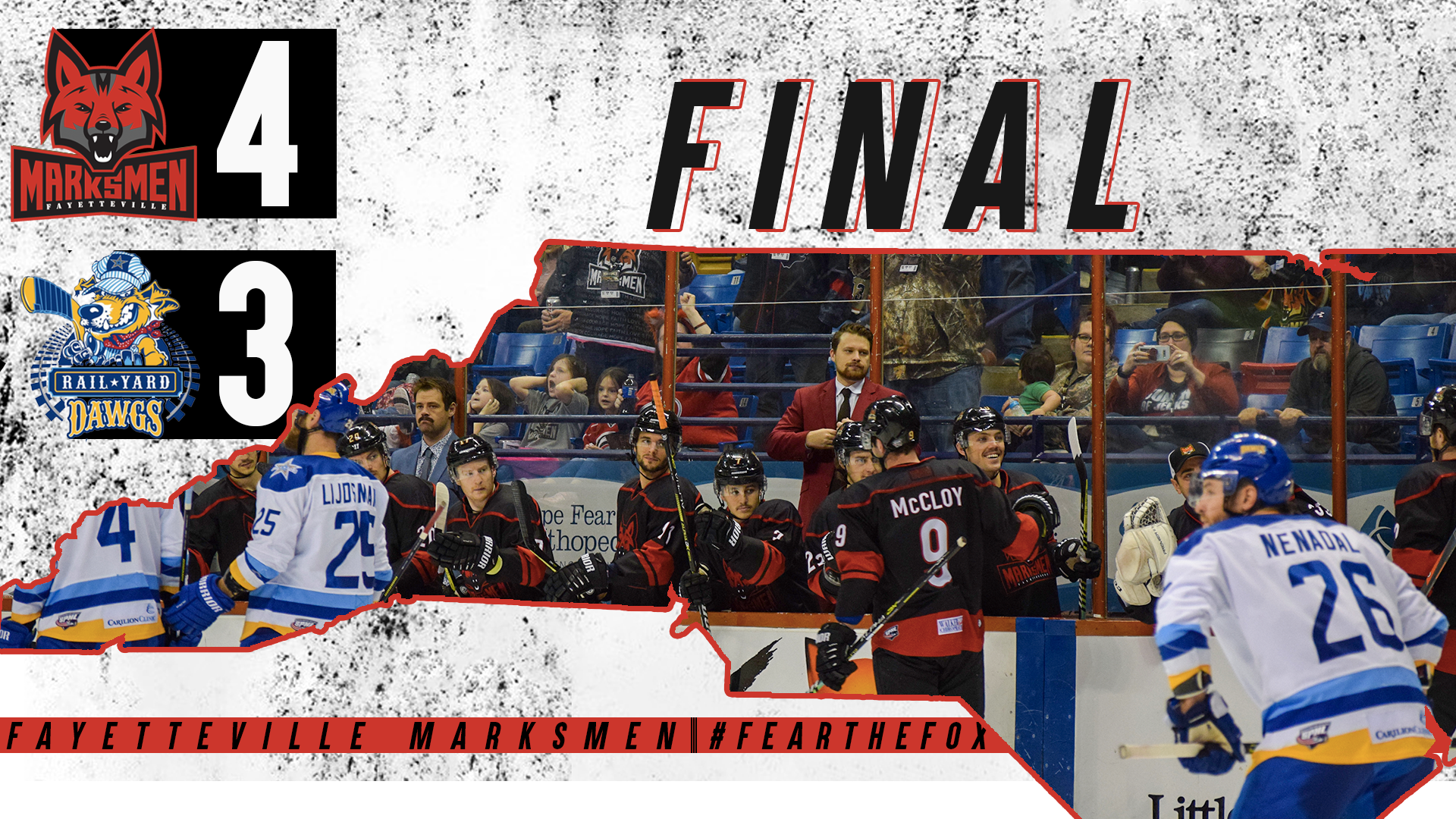 FAYETTEVILLE, NC – Bunch of Jerks Night at The Crown, as the Marksmen stayed the Jerks of the SPHL.

A huge 6-2 win on Friday led the 7-0-1 Marksmen into the game against last place Roanoke. Fayetteville looked rough out of the gate, not getting a true scoring chance for the first 8 minutes of the game. The defense looked the same as the offense early, allowing multiple shots and the first goal of the game. The goal gave Roanoke the lead, only five minutes into the contest.

Fayetteville slowly, but surely, took control on their offensive end. They sent multiple shots at Roanoke goaltender Stephen Klein, Klein being able to save them all. The period moved on with opportunities, but no goals for the Marksmen. Special teams played a major role, once again, starting with a penalty kill late in the period. The kill couldn’t finish before Roanoke was blown for a penalty of their own, making it a four on four situation for 20 seconds.

Twenty seconds was all the Marksmen needed of four on four play, as Brian Bowen found the back of the net. His fifth goal of the year, tying the game at one goal a piece going to the intermission. The second period started out much different than the first for the Marksmen.

Not wasting any time, Taylor McCloy kept his hot hand going, scoring 50 seconds into the period. The goal was his fourth of the year, and gave the Marksmen the lead at the opening stages of the second. Fayetteville’s attack stayed strong, getting six straight shots to the Roanoke net. The attack didn’t do much, as Roanoke tied the game at two.

A Marksmen penalty led to more special teams play, starting out with a shorthanded goal by Luke Stork. The Crown erupted as Fayetteville took the lead, although it didn’t hold for long. As the goal was being announced over the PA by Carolina Hurricanes’ PA man H. Wade Minter, the Rail Yard Dawgs struck again. Only 26 seconds after taking the lead, the score was tied once again, this time at three.

The closing parts of the second were not what you’d call uneventful. Multiple fights and penalties riled up the Crown and the Marksmen offense as Luke Stork found the net yet again, giving Fayetteville a 4-3 lead into the final intermission.

The third period was a period of defense, and the Marksmen were up to the task. They faced and defended shot after shot from the Rail Yard Dawgs, not sprinkling in too many of their own. Blake Wojtala held strong between the pipes, behind a rousing crowd. Roanoke pulled their goalie in the waning minutes of the game, but it proved to be not enough.

The final horn sounded on another Marksmen win, 4-3, over Roanoke. In honor of the Hurricanes, and a Bunch of Jerks themed night, the Marksmen did the signature “storm surge” following the win. The win was the eighth of the season for Fayetteville pushing their record to 8-0-1. They travel to Pelham, Alabama to face off against the Birmingham Bulls in their first big road test of the season.

MARKSMEN CONTINUE TO WIN ON THE BACK OF STELLAR OFFENSE!