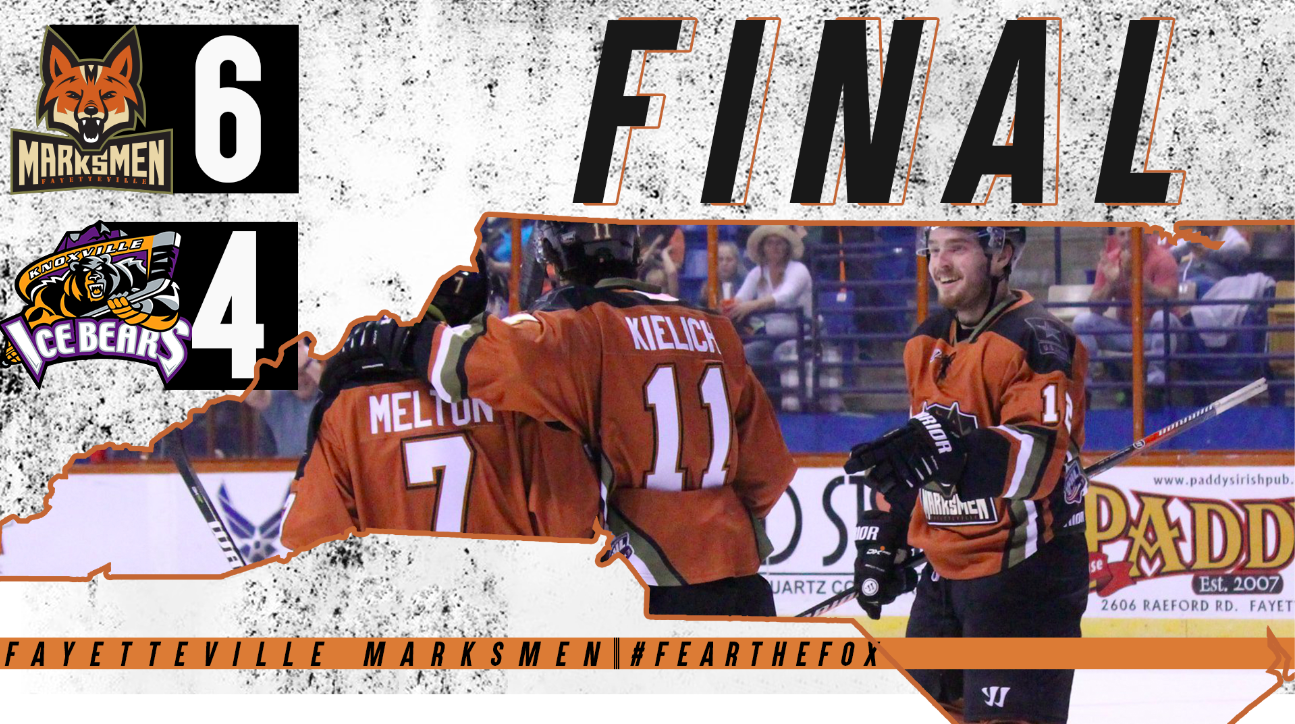 FAYETTEVILLE, N.C. – Looking for some post-Christmas magic, the Marksmen welcomed in the Knoxville Ice Bears in for a Friday night affair in the Crown Coliseum. Knoxville, losers to Huntsville 7-4 at home the night before, was looking to turn their fortune around against the 1-1-3 Marksmen in their last five.
The night would not start favorably for the home foxes, as Knoxville would strike in the first minute of the game off of a Bryce Nielsen screen in front :54 in. This would stand for some time, as the Marksmen would fail yet again on the power play. Finally past the halfway mark of the first period, Brian Bowen would tip home a Max Cook shot for his 11th of the season to knot things up. Scott Cuthrell would strike just over two minutes later to make it a 2-1 Ice Bears lead after twenty.
Period two would see the Marksmen overcome multiple feats. The Marksmen would come out looking like a team woken up by a tough first period, and take over time of possession, and finally strike before the halfway mark with Nick Le Sage’s third goal of the season with 11:57 to go in the second, after crashing the net. Late in the period, heading back to the power play, the Marksmen frustration would finally end on the man-advantage as Brett Johnson would find twine for his second as a Marksmen with 2:42 left in the second. Fayetteville would turn their luck around with a 3-2 lead heading to the third.
The penultimate period would find these two Villes battle to the bitter end. Bryce Nielsen would once again get his puck through, knotting things up with 18:11 to go. Less than two minutes later, Jacob Benson would sneak a puck past Pashovitz to give the Ice Bears a lead once again. The Marksmen would take over from there on out, as Shane Bednard’s second of the season would knot thing up, and would carry that torch until the final minutes. With :32.3 left in the game, Brian Bowen would once again tip a shot through for the ultimate game winning goal. With an empty-net in front of him, Taylor McCloy would return to the scoresheet with the nail in the coffin.
Fayetteville would dominate the final half of the game enroute to their first win in five tries. The win gives Fayetteville its 12th win of the year in their 19th game, and improve the record to 12-3-4. The Marksmen look for the weekend sweep as they head to Knoxville tomorrow morning.