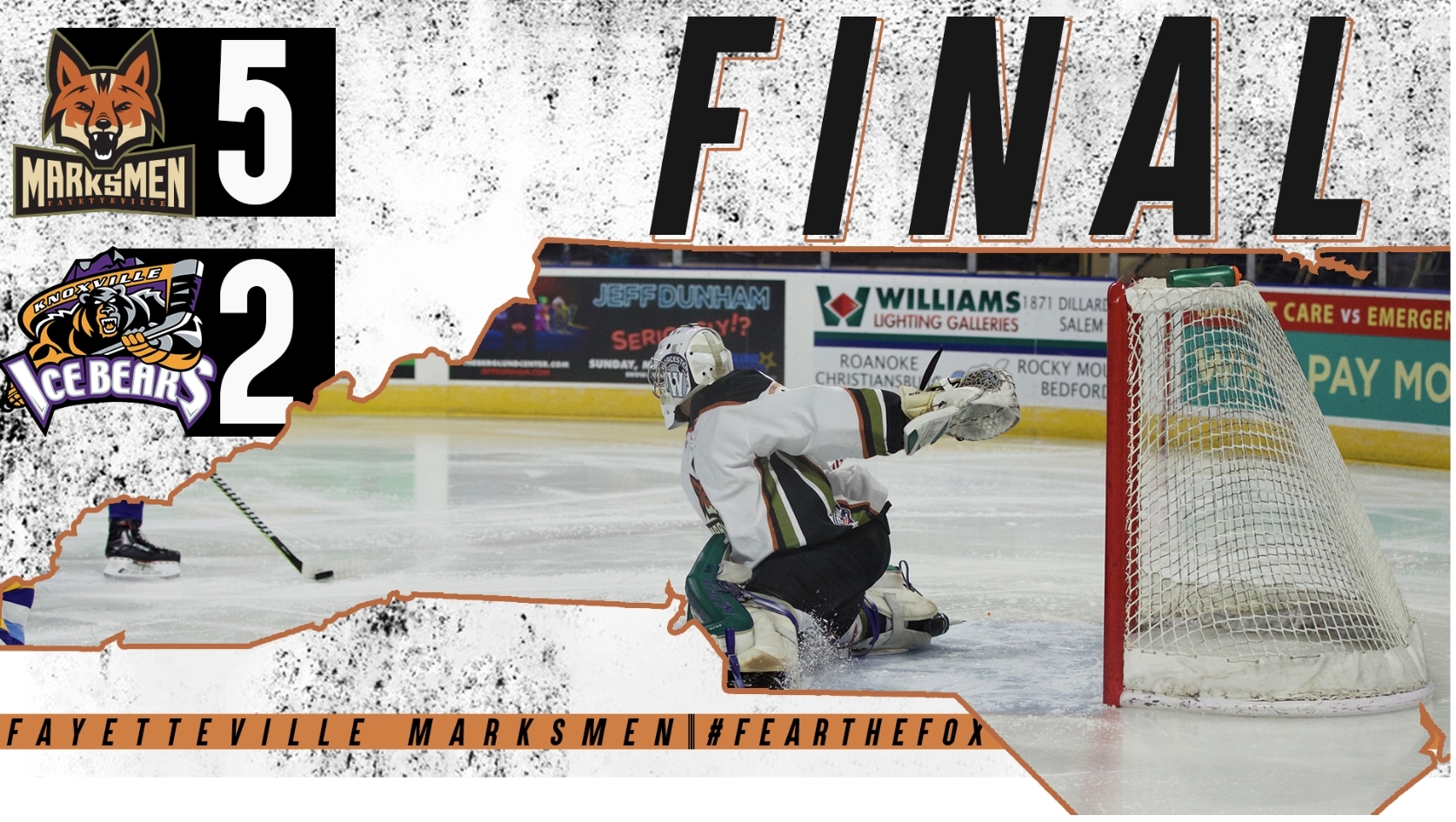 KNOXVILLE, TN – Looking to continue a weekend that saw the Fayetteville Marksmen snap a number of unfavorable skids, the team would load up and head over to Knoxville for a Saturday night Smoky Mountain Showdown. Without Captain Max Cook or Alternate Captain Travis Jeke, the next-man-up mentality would need to play a factor in a big way.
The team would certainly be ready to step up right out of the gate. Despite being outshot early on, the Marksmen would strike first blood. With 14:34 left in the first, Taylor McCloy saw Brian Bowen streaking up the ice all-alone, fed him a perfect pass, and Bowen wouldn’t miss; #12 would find his 12th of the season. Following more empty shooting from the Ice Bears and a failed Power Play, the Marksmen would once again find their scoring-stride. Stuck in the corner with the puck, Josh Victor would provide a perfect feed to Tim Kielich in front of the net, and he’d sneak it through the five hole of Hayden Stewart for his third goal of the season. Despite being outshot 18-9, Fayetteville would take a 2-0 lead to the intermission.
In the second period, the success of the Marksmen would not falter. After breaking an 0/17 skid on the Power Play last night, the Marksmen would start things off 1/1 with some tactful tic-tac-toe passing to Frankie Melton for a one-timer Power Play goal with 16:04 to go in the second. A few minutes later, on their own Power Play, the Ice Bears would sneak a puck into the right post that would tuck itself in from Ricky Kramer to make it a two-goal game. Frankie Melton would not let that stand. Back to five-on-five hockey, Melton would put together a picturesque highlight-reel goal on a spinning backhand rising shot tucked into the top-right corner with 9:36 to go. With that goal, the scoring would stop in the period for either team, as Fayetteville would hold off rushes from the Ice Bears thanks to outstanding goaltending efforts from Blake Wojtala. Despite being outshot 35-22, the Marksmen would take a 4-1 lead to the final period.
Period three would start similar to how Friday night’s game would for the Ice Bears: a goal in the first minute. Jacob Benson would be the responsible for the score :55 into the period. Outside of the goal from Benson, play would remain increasingly-chippy, but overall would not see any mistakes from either squad leading to a goal past the halfway mark of the period, despite plenty of Knoxville chances. Minutes later, after the Marksmen would continue an onslaught of shots, desperate for insurance points, Alec Marsh would somehow, someway force a scrummed puck underneath the goaltender to make it a 5-2 game with 7:11 to go. The Marksmen would hold off a final minutes 5-on-3 to secure their fifth straight game with at least a point, and their second straight win – sweeping the weekend series with the Ice Bears.
Fayetteville has one game remaining in 2019 – and the decade – as they travel up to Roanoke on New Year’s Eve for a 6:05 puck drop against the rival Rail Yard Dawgs, looking for three-straight wins.

Melton moves on up to Wichita Scroll to top