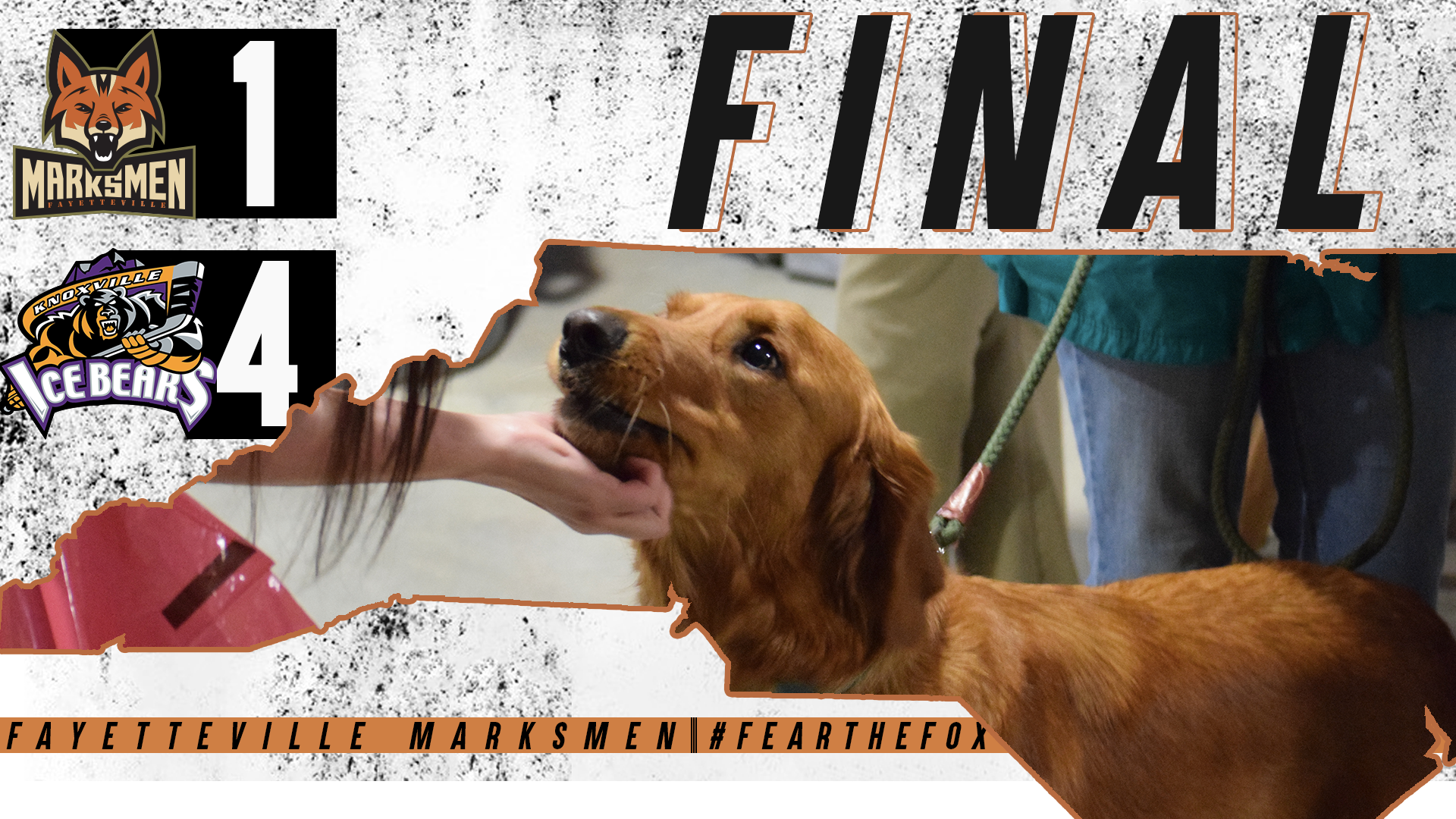 FAYETTEVILLE, NC – A blowout Thanksgiving day victory gave the Marksmen a lot to be thankful for going into their Saturday matchup against the Knoxville Ice Bears. Bringing a 10-1-1 record, good for second in the SPHL. They looked to keep their home ice point streak going, having not lost in regulation at the Crown since March 22nd.

The game looked to be going well for the Marksmen, they controlled the puck in the offensive end, sending many shots on net. They sent off five shots in a row, including a pair while they were on the penalty kill. Their penalty kill was successful early, not allowing a single shot on net during the kill. The period went on, Fayetteville still controlling the puck predominantly in the offensive end.

Special teams had another task, this time the power play was called on. The power play team put in work, sending seven shots to the net in a 1:07. Although the shots came at the net in bunches, the Marksmen couldn’t put any past the goaltender. Knoxville went back to full strength, but that didn’t change much for the Marksmen. They kept sending pucks to the net, and Knoxville kept blocking them. The Marksmen were responsible for 20 shots in the opening period, none of which found the back of the net.

The second period started with the game still scoreless. The Marksmen got the first shot of the period, but that didn’t get them going. Knoxville opened up the scoring, finding the net just under four minutes into the period. The goal put all the momentum on the Ice Bears’ side, and they didn’t give it up. Just 16 seconds after the first goal, Knoxville found the net again. An unassisted goal, giving the Ice Bears a 2-0 lead in the early goings of the second period.

The Marksmen couldn’t get it going after the pair of goals by Knoxville, going five minutes with only one shot on net. The Fayetteville penalty kill got another chance after the pair of Knoxville goals. The kill wasn’t successful, allowing a goal on the first shot on the power play. The goal sent the game to 3-0 Knoxville, taking all the wind out of an already depleted Marksmen sail.

With a 3-0 hill to climb, the Marksmen knew they needed to change something, and they did that by pulling starting goaltender Blake Wojtala, entering Ben Halford for the first time. Fayetteville started to find their way offensively, sending more shots at the net, but still no goals. With 9:14 to play in the second, Frankie Melton finally opened the scoring for Fayetteville. The goal sent the deficit down to two, but it wouldn’t stay for long.

Just over a minute after the Marksmen scored their first goal, the Ice Bears struck again. Their fourth goal of the game, sending the lead back to three for them. The rest of the period played out uneventfully, with coincidental minor penalties being the only real action other than empty shots.

Fayetteville came into the final period of the game needing something to get them going. Marksmen special teams got work early and often, an early power play, but a quick penalty right after, shooting down any chance of a power play opportunity. Another pair of penalties later in the period led to nothing as well.

Both teams failed to do much of anything offensively, with only seven combined shots on net in the third period. That didn’t bode well for the Marksmen, as they needed three goals to tie the game, and only took two shots all period.

The final buzzer sounded, and Fayetteville didn’t come out on top. The Marksmen lost their first home game in regulation in 253 days, falling to Knoxville 4-1. The loss sends Fayetteville down to 10-2-1 with a game at Macon coming up next Saturday.

Forward Shane Bednard returns to Norfolk on Call Up