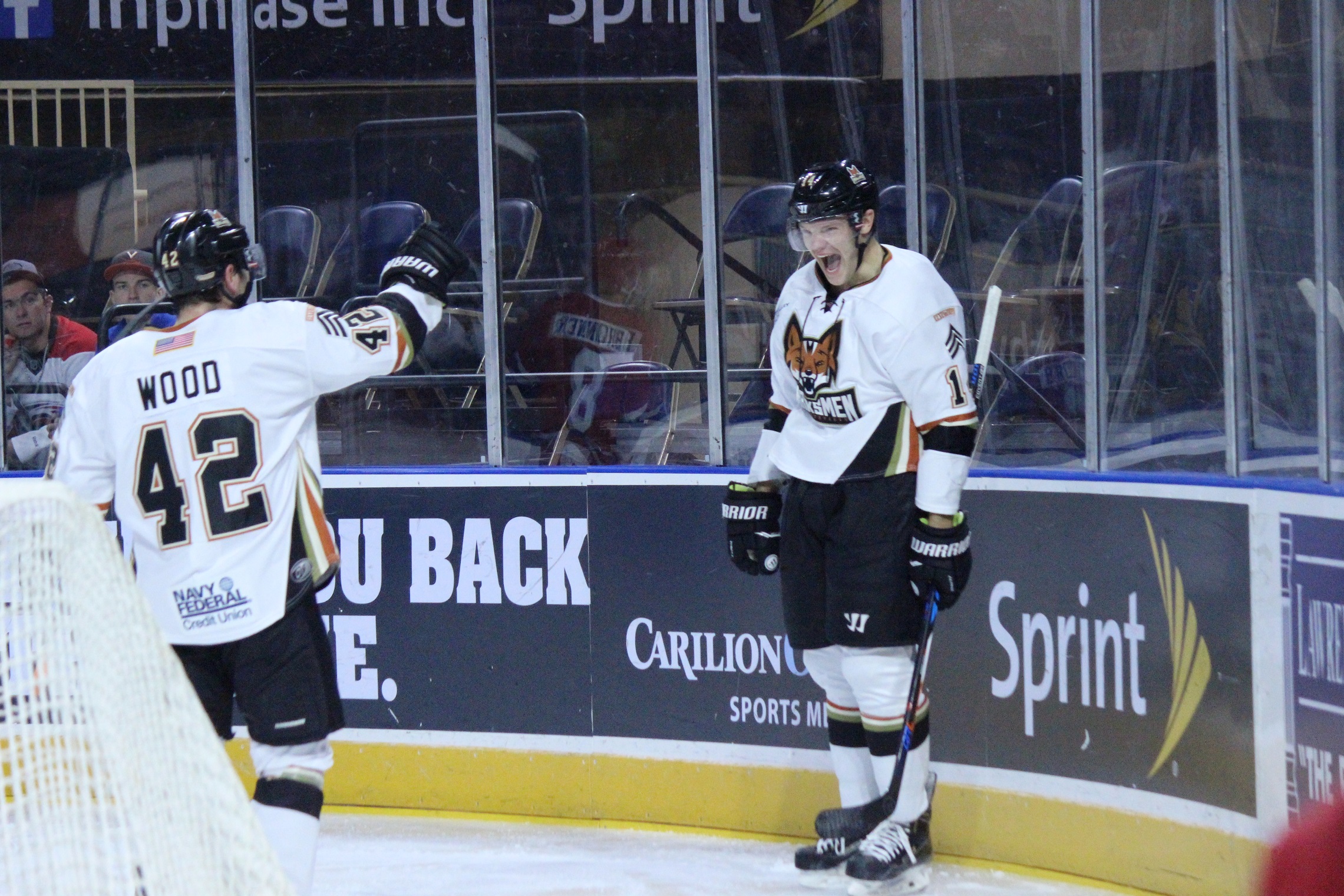 Fayetteville, N.C– The Fayetteville Marksmen held a 3-1 lead to begin the second period, but couldn’t stifle the Peoria Rivermen offense, eventually falling 6-5, in overtime at the Crown Complex on Saturday night.

Despite heavily outshooting the Rivermen throughout the early portion of the first frame, the Marksmen found themselves in a 1-0 hole. Battling along the boards, Jacob Barber pushed a backhander towards the crease of Peter Di Salvo, who poked the puck out to the slot, where Connor Gorman was waiting and trickled a shot to the back of the net.

Not deterred by falling behind early, Chris Porter evened the score at 1-1, late in the first period. Streaking into the zone, Porter chipped a pass on Eric Levine, who shouldered the attempt to the corner, where Joe Kalisz slid the puck back towards the crease, deflecting the puck off of Porter’s skate.

Less than one minute later, Jake Hauswirth gave the Marksmen their first lead in a game since November 24. Shane Bennett found the puck along the leftwing boards, skated in on Levine, garnering attention from the Rivermen defense, allowing Hauswirth to slip to the weakside and bury the pass from Bennett into the open net.

That wasn’t enough for the Marksmen, who extended their lead to 3-1 with just over two minutes remaining in the opening frame. Porter found Kyle McNeil skating in front of Levine’s crease, unmarked, and fed a tape-to-tape saucer to him. McNeil then used a soft backhander to beat Levine over the glove.

The offensive prowess of both teams continued to be on display early in the second frame.

While on the power play, the Rivermen made it a 3-2 game, just 1:24 into the period. A point shot found it’s way through bodies in the crease and flipped in on Di Salvo. The rebound caromed into the crease, with several skaters whacking at it until Gorman finally pushed it through for his second of the night.

Not content with a close contest, Cody Walsh put the Marksmen back up by two, just 1:03 later. Working in on a two-on-one, Walsh looked to dish the puck to John Schiavo, but called his own number, going top shelf for the strike.

Continuing the back-and-forth action, the Rivermen pulled to within one at the 3:57 mark of the second frame. Utilizing crisp passing through the neutral zone, Barber created space entering the zone, giving him the opportunity to find Gorman on a cross-ice feed, completing the hat trick for Gorman.

Both teams settled down through the middle portion of the period, but the Rivermen wouldn’t be denied the game-tying tally. Working on another power play, the Rivermen displayed excellent passing throughout the zone, with the puck eventually finding Barber on the weakside. His shot attempt hit the crossbar, trickled through the crease, and was tapped in by Cody Dion, making it a 4-4 game to end the middle stanza.

Completing the comeback early in the third, the Rivermen took advantage of the extra space, while working a four-on-four situation. Off the face off win, Dave Pszenyczny launched a rocket from the left point, over the shoulder of Di Salvo.

With time winding down in the game, the Marksmen pulled Di Salvo for the extra attacker and the move paid dividends. With six skaters in the zone, traffic piled up in front of Tyler Parks, who came in of relief of Levine, blocking his vision of Hauswirth’s wobbler from the left point with 11.5 seconds remaining in regulation.

In the extra frame, both teams traded chances, but Ryan Siiro gave his team the 6-5 victory. Skating into the zone, Siiro took an innocent-looking wrister from the circles that fooled Di Salvo and ended the game.

Game Notes:  The Marksmen went 0/7 on the man-advantage, while the Rivermen went 3/6. Di Salvo made 27 saves on 33 shots. Hauswirth recorded his first goal since November 24, and his first multi-goal game since November 11.