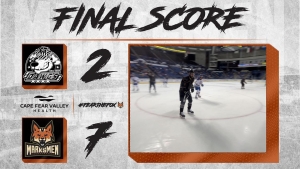 The Marksmen opened the scoring when Brian Moore capitalized on a net-front rebound to notch his 11th goal of the season. Moore would later add an assist in the game.

Later in the period, Shane Bednard scored on the powerplay to extend the lead to two. The Marksmen outshot the Rail Yard Dawgs 14-6 in the opening frame.

Just 2:50 into the second period, Drake Glover beat Austyn Roudebush on the short side for his ninth goal of the year. The goal chased Roudebush, the second time that the Marksmen have runoff a Roanoke starting goalie in as many games. Roudebush stopped 12 of 15 in 22:50 of action.

Then with less than five minutes to go in the period, Vincenze Renda notched his first North American professional goal to send the Marksmen up 5-0.

The third period would open with Glover scoring his second of the night on a breakaway down the far boards. Glover also scored a pair in the October 15 win over Roanoke.

While the Rai Yard Dawgs would get two back with Travis Armstrong and Brady Heppner scoring, the result was already in hand.

Jarret Kup would add his third of the season out of the penalty box to make it seven goals for the Marksmen. The seven goals are the most the Marksmen have scored in a single-game this season.

The two teams will face off tomorrow on Disney night, the final weekend of Family Weekend presented by Manna Church. Tickets are still available at marksmenhockey.com in limited quantities.