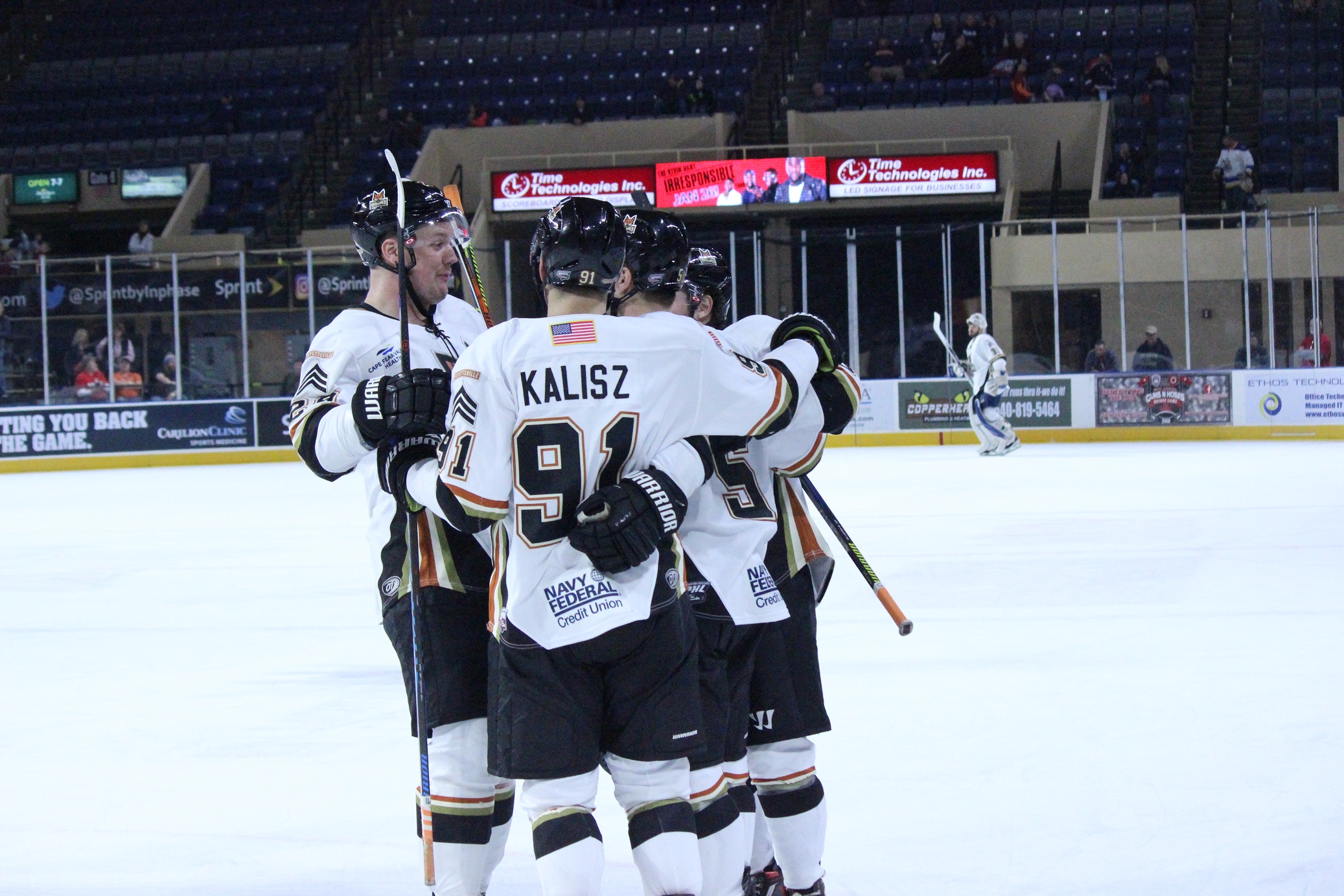 Fayetteville, N.C- Battling back from an early 3-0 deficit, the Fayetteville Marksmen displayed poise and resiliency in route to a 5-4 overtime victory, over the Macon Mayhem on Friday night at the Crown Coliseum.

For the ninth time this season, the Marksmen surrendered the first goal of the game. Taking a corner pass into the slot, Jake Trask rifled home a one-timer, over the glove of Matt Zenzola.

Extending their lead to 2-0, the Mayhem struck once again just over three minutes later. Working the puck behind the net, John Siemer fed a saucer pass to the tape of Darren McCormick, who fired the puck into the open net, as Zenzola was tracking the opposite direction.

At the 7:09 mark of the second frame, the Marksmen battled to make it 3-1. Max Cook carried the puck through the zone, dancing around Mayhem defenders, and pushed the puck to the far post, while falling to the ice. Chris Porter and Jake Hauswirth earned the assists on the tally.

Myles McCauley narrowed the Marksmen gap to one with his second in as many nights. Working through the neutral zone, McCauley let loose a howitzer from his side of the blueline, looking for an innocent dump-in, but the puck fooled Troy Passingham, making it a 3-2 game.

The Marksmen continued to push the pace and were rewarded with the game-tying goal, courtesy of a Hauswirth power play tally, with 22 seconds remaining in the second period. Cycling the puck around the right-wing boards, Hauswirth turned at the top of the circle and rocketed a heavy blast, past Passingham who was screened on the play.

Giving the Marksmen their first lead of the night, John Schiavo extended his team-lead in goals scored with his eighth of the season. Working near the goal line to the left of Passingham, Schiavo lifted a shot on net, squeaking the puck between the netminder and the pipe, giving the Marksmen their second power play goal of the evening and a 4-3 lead.

The Mayhem stopped the onslaught with their fourth goal of the night to even things up. Off an offensive zone faceoff, the puck skirted through the defender’s legs, where Stathis Soumelidis picked up the puck and roofed a quick wrister to the far corner.

Regulation time proved to not be enough, moving the game to three-on-three, sudden-death overtime.

In the extra frame, the Mayhem peppered Zenzola early, but their aggressiveness allowed Cook to locate the puck and skate, coast-to-coast on a breakaway. When in the Mayhem zone, Cook, moved Passingham with a backhand/forehand deke, giving him an open net for the 5-4 game winner.