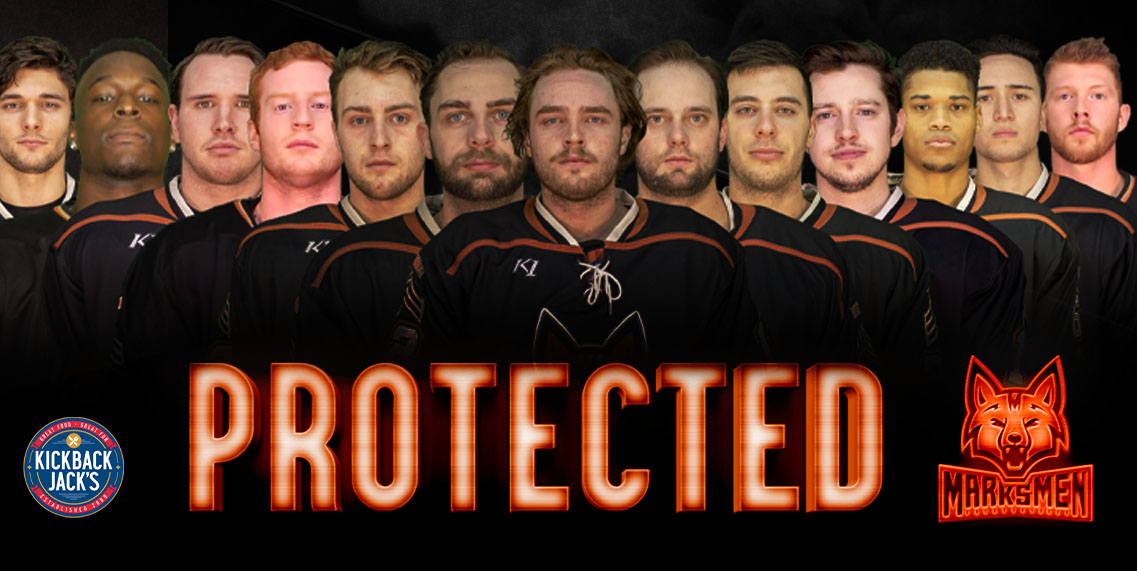 FAYETTEVILLE, NC – Today the Fayetteville Marksmen announced their protected players list for the 2019-2020 season and the 2020-2021 off season. We retain the rights to these players throughout the 2020-2021 SPHL season.

Brian Bowen, F – Bowen led the SPHL in goals scored with 30 in his second year with the Marksmen. He also led the Marksmen in points while being named to First Team All-SPHL.

Taylor McCloy, F – McCloy was named an alternate captain and led the league in +/-. McCloy ended this season with 42 points in 45 games played.

Blake Wojtala, G – In his rookie year, Wojtala put up a .920 save percentage over 28 games played. Wojtala was the Marksmen starting goalie for the majority of the season.

Shane Bednard, F – Bednard would make the All-Rookie team in the SPHL while putting up 37 points in his rookie year. Bednard took one ECHL call-up before finishing the season with the Marksmen.

Stathis Soumelidis, F – Acquired in a trade with the Macon Mayhem, the Czech native put up 5 points in 9 games played with the Marksmen this season. Soumelidis finished this season off strong after coming back from injury.

Alec Marsh, F – Marsh was one of the top rookies in the SPHL before taking call-ups to the ECHL. With the Marksmen, Marsh finished with 27 points in 34 games played.

Derian Hamilton, D – Hamilton was one of the Marksmen shut down defensemen this season. Hamilton earned two call-ups to different ECHL clubs throughout the season.

Drake Glover, F – After finishing his college career with the Univ. of Alaska-Anchorage, Glover came on strong putting up 6 points in 8 professional games.

Josh Victor, D –  The fan-favorite defensemen helped the Marksmen after being acquired in a trade with Quad City earlier in the year. Victor finished the year with 3 fights throughout the year.

Malcolm Hayes, D – Another fan-favorite defensemen who made his impact known in opening night, spent 17 games with the Marksmen before earning a call-up to the ECHL.

Christian Lloyd, D – While never playing a game for the Marksmen in the ’19-’20 season, Lloyd was brought in to help solidify the Marksmen defense before heading into the playoffs.

Tim Kielich, F – The utility forward ended his second season in Fayetteville with 21 points. Kielich was a key in the Marksmen special teams throughout the year.

Luke Stork, F – Stork was one of the most exciting Marksmen in the beginning of the season, with 16 points in his first 10 games. Stork would finish the season in the ECHL.

Marksmen stay active within their community during corona virus outbreak. Scroll to top