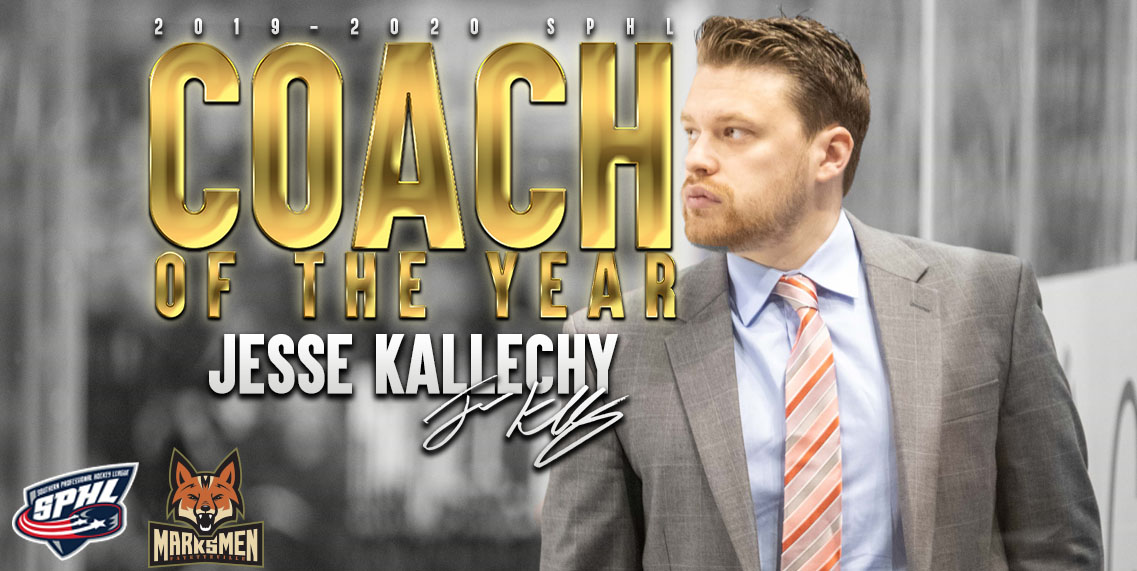 FAYETTEVILLE, N.C. – Leading the Marksmen from the basement of the Southern Professional Hockey League to finishing this shortened-season tied for first, second-year Head Coach Jesse Kallechy has been named the league’s Coach of the Year.

A former player in the SPHL, Kallechy transitioned from player to coach with the Huntsville Havoc, where he worked as an assistant coach for a few seasons. Following the Havoc’s Championship in 2017-2018, Kallechy was offered his first Head Coach gig with the Fayetteville Marksmen after incredible potential was seen in him from Marksmen CEO Chuck Norris.

“From the start, I knew Jesse was going to do a great job. He took the worst team in the league, and built it into the top team in the league in just his second season.  He’s very passionate about the Marksmen and he shows it every single day, on and off the ice,” said Norris “I couldn’t be more proud or happier for him. He deserves this honor, and I’m ecstatic that our league saw it the same way.  We are very fortunate to have him here, guiding our franchise to the top of the SPHL.”

The 29-year-old from Sherwood Park, Alberta inherited a 12-win Marksmen team heading into the 2018-2019 season – his first year ever as a Head Coach – and quickly doubled the team’s win total while clinching their first playoff spot. In his second season, with 10 less games played, he lead the Marksmen to 31 wins in 46 contests, and held them in a top two spot the entirety of the season.

Joining Kallechy on the bench was a former student of his, Cory Melkert, who was named Assistant Coach over the Summer. Being a player and coach alongside Kallechy, Melkert could speak of the ability of the Head Coach as a leader.

“It was an honor to be able to coach alongside Jesse this year. Not knowing what to expect in my first year coaching, I couldn’t have asked for a better mentor and friend. He cares just as much for his players as he does for anyone else, and that’s a hard quality to find in a coach,” said Melkert “Jesse takes his job very seriously and deserves every accolade he receives.”

Kallechy is the fourth coach in franchise history to be named to the league’s most prestigious honor for coaches; the first such Fayetteville coach awarded since 2013, and first for the Marksmen.

Marksmen CFO Lanai Norris works constantly alongside Kallechy during both the offseason and in season, figuring out Hockey Operations operating budget, player compensation, and so much more unknown to the public.

“Jesse has been fantastic for our organization from the start. He has such a passion and professionalism for this organization and his position with the Marksmen,” said Norris “Our entire Marksmen Family could not be happier for Jesse, and this award is a direct reflection of his dedication to our team.”

Congratulations to Coach Kallechy on the well-deserved honor and the overdue moment in the spotlight. The future is bright for Fayetteville under their Coach of the Year.