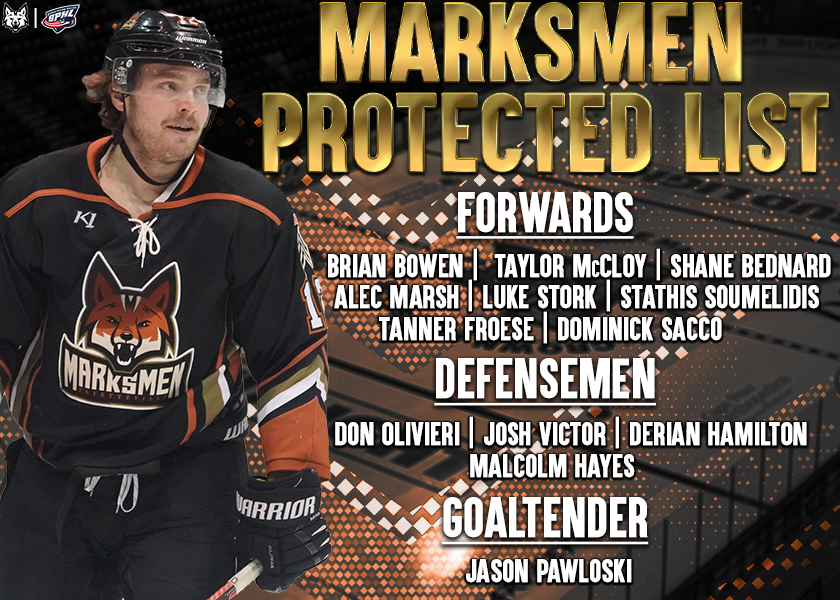 FAYETTEVILLE, N.C. – With the dawn of a new season just over the horizon, the Fayetteville Marksmen take the next step toward hitting the ice in October with the unveiling of the base of the roster – the Protected List.

While each Southern Professional Hockey League team is able to ‘protect’ 13 players from becoming league free agents every season, this year’s list is the most conclusive yet due to a pair of factors – the compressed 2020-21 season and league-expansion to Vermilion County.

Unable to participate in the 2020-21 season due to state restrictions from the Coronavirus, the Marksmen roster was free-to-sign with any of the five teams playing in the season. Upon the conclusion of the season in May, the remaining five teams unable to take part in the season had their lent players returned to their roster – including the Marksmen.

With the Vermilion County Bobcats set to start play in October as the SPHL’s 11th-team, an expansion draft will be set to take place in the near future. Any player left “unprotected” by an organization is eligible to be selected by the Bobcats, with “undrafted” players remaining set to be available as free agents for all 11 teams.

After a first-place run during the shortened 2019-20 season, first-year Head Coach Cory Melkert now gets the chance to build a roster ready to return to prominence and finish the job robbed by circumstance.

Without further hesitation, the Marksmen 2021 Protected List is as follows – listed by number of games played with Fayetteville:

Coach Melkert will have plenty of familiar faces returning for his inaugural season at the helm, including 10-members from the 2019-20 team.

“It’s exciting when you’re able to protect such a good group of players. We’re able to protect a good mix of older guys that have experience in the league, and younger players that still have a lot to prove,” said Melkert “I’m excited to get everyone back to Fayetteville, and get back to the level we were at last season.”

Included in the mix is former Marksmen leading-scorer Brian Bowen, who participated in the 2020-21 season as a member of the Macon Mayhem. In Macon, Bowen accounted for 35 points in 30 games (20G+15A), enroute to helping the Mayhem secure the William B. Coffey Trophy as Regular-Season Champions – alongside fellow Protected-Listers Josh Victor and Stathis Soumelidis.

The Marksmen also return former SPHL All-Rookie Team Forward Shane Bednard, who spent the latter parts of the 2020-21 season with the Huntsville Havoc, finding seven points in 15 games (4G+3A). Bednard joined Goaltender Jason Pawloski in the Rocket City, who was a member of the Marksmen during their playoff run in 2018-19 – winning the first-ever playoff game in team history. Pawloski was set to play in Fayetteville in 2019-20, but was injured during an exhibition game that sidelined him for the season. In Huntsville this season, Pawloski recorded a 3.21 GAA in 19 games, with a .897 SV% and one shutout.

Taylor McCloy and Luke Stork did not participate in the 2020-21 season, but will be a welcome-return to the Marksmen offense. McCloy, a member of the Marksmen since 2018-19, has been a cornerstone of the offensive success of the Marksmen since arriving from Quad City. Stork only spent two handfuls of games with the Marksmen, but was noted for his lightning speed and natural goal-scoring ability. Scoring-threat Alec Marsh will return as well, after spending time this season between two of Florida’s premier teams, the Pensacola Ice Flyers of the SPHL, and the ECHL’s Florida Everblades.

Defensively, the Marksmen will enjoy the return of a veteran blue-liner in SPHL journeyman Don Olivieri, who played a pair of games with the FPHL’s Columbus River Dragons this season. He’ll be joined by a staple of the 2019-20 Marksmen on the blue line in Derian Hamilton.

A new-name for Marksmen fans will definitely be Tanner Froese, who comes to Fayetteville with notable experience in both the SPHL, as well as the ECHL. Froese, 28, most recently was a member of the Birmingham Bulls, where accumulated 12 points in 36 games. Froese was a member of the Bulls team alongside Fayetteville fan-favorite Malcolm Hayes, who played in 12-games during the 2020-21 season.

With the foundation of the roster for the 2021-22 season in place, another step is gained closer to the return of Marksmen Hockey for the first time since March 2020. Under the leadership of Coach Melkert – formerly a player and Assistant Coach in Fayetteville – expectations are heavy for the Marksmen, especially with such an experienced and loaded squad returning to the All-American City.

The Marksmen are excited to welcome a fully-open, 100%-capacity Crown Coliseum in the Fall to cheer the team toward another championship-caliber run. Season Tickets are on-sale NOW, with Opening Night and the Full Season Schedule to be released in the coming weeks.