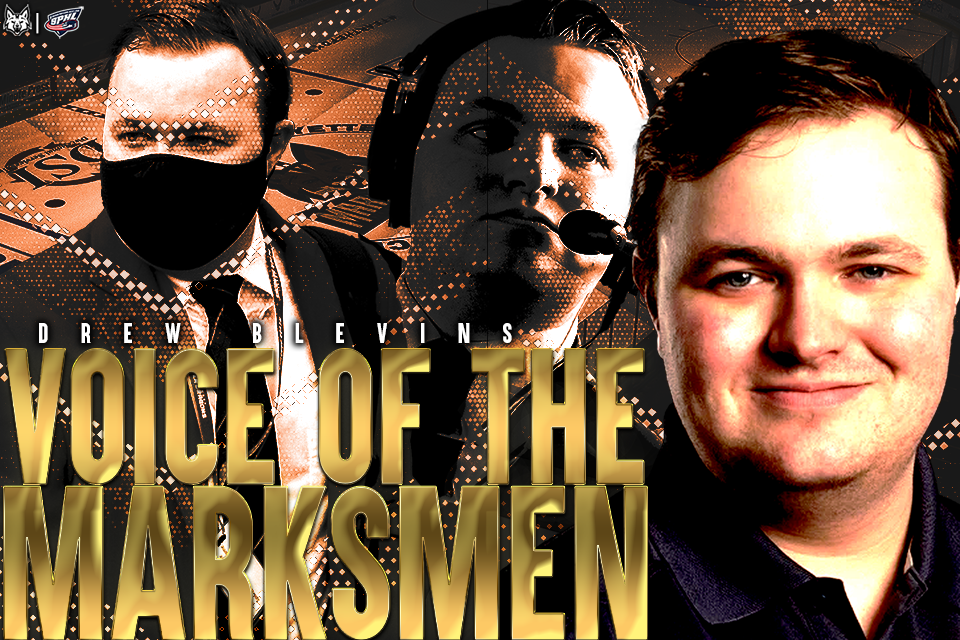 FAYETTEVILLE, NC – The Fayetteville Marksmen wouldn’t have to go far to find their new voice – finding the team’s new broadcaster right in their backyard. Drew Blevins, a native-North Carolinian, joins the organization ahead of the 2021-22 season to bring to life the story of the Marksmen on-ice.

Blevins, 26, is a graduate of North Carolina State University, where he was the Voice of the NC State IcePack hockey team. More recently, Blevins served for two seasons as the Vice President of Communications for the Federal Prospect Hockey League’s Carolina Thunderbirds (Winston-Salem, NC). In Carolina, Blevins was a finalist for FPHL Broadcaster of the Year during the 2019-20 season, and was part of the Thunderbirds road-only 2021 season, where he created and operated a full-production video broadcast for the fans at home.

Marksmen Fans may be familiar with Blevins’ name and voice, as he served as a fill-in Play-by-Play broadcaster for the Marksmen near the end of the 2019-20 season, debuting during Disney Night on February 7, 2020.

With that magical win, we are now tied for FIRST PLACE in the league. Is that good?

“Being a Marksmen is a special feeling for me. I’m excited for the chance to move up a league, and get to work with a franchise that is growing and building a competitive hockey product and top-tier family entertainment value,” said Blevins “For me, it’s a privilege to be able to stay in my home state and call the game that I’ve grown up loving, just a few minutes from my own backyard.

Entering the Marksmen’s first-season with HockeyTV as the primary broadcast element of the Southern Professional Hockey League (the league’s second), Blevins will look to cultivate the highest-quality video & audio broadcast while providing captivating and engaging broadcast storytelling. Alongside Broadcasting, Blevins will also be responsible in coordinating all of the team’s communications efforts and outreach with our community with players, coaches, staff, and World-Famous Fox Marky Marksmen.

Blevins joins the Marksmen Staff after former Voice of the Marksmen Shawn Bednard was announced as the new voice of the Ontario Hockey League’s Erie Otters earlier this week, coming highly-recommended by the three-year Fayetteville vet.

“Drew embodies everything right about broadcasting – drive, passion, storytelling, and professionalism,” said Bednard “Marksmen Fans will very quickly learn why he’s been so beloved at his former stops, and I’m ecstatic to hear Drew’s first call officially as the Voice of the Marksmen. Drew is a good colleague, a great friend, and an even better ambassador for this organization.”

Bednard served the last three seasons for the Marksmen as the Director of Communications & Community Outreach – joining the team immediately after graduating from Central Michigan University in 2018.

“There are not enough words to say about my three years with the Marksmen and here in Fayetteville. First-and-foremost, the biggest thanks in the world to Chuck [Norris, Marksmen Owner] for taking a chance on me and for helping me grow as a person and professional since I arrived. The same, this last year, to be said about Alex Wall [Marksmen EVP], for being a teacher, a mentor, and a friend. The future of the Marksmen is blindingly bright,” said Bednard “My biggest thanks to everyone who was part of our organization in my time here – our fans, our Season Ticket Holders, our Corporate Partners, our Boosters, and so many more folks. I will truly miss the kinship that was shared here in Fayetteville, and I will miss the passion displayed every game day.”

The Marksmen thank Shawn for his time with the Marksmen. Blevins will take over the title of the previous broadcaster, serving as the Director of Communications & Community Outreach.

The Marksmen Organization is thrilled to bring aboard a rising-star in the hockey broadcasting industry, and look forward to the growth of the media, broadcast, and community relations departments under Blevins.