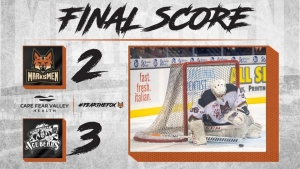 The game started well for the Marksmen with Taylor McCloy and Drake Glover scoring in the opening period. Taylor Best assisted on the McCloy goal to earn his sixth point of the season and notch his third-straight game with a point.

The second period saw Marksmen forward Tanner Froese leave the game early with an injury, and he would not return.

Dean Balsamo scored 7:50 into the second period to make it 2-1. Balsamo hadn’t scored all year to that point.

While the Marksmen controlled the third period, defenseman Don Olivieri took a major penalty for slew-footing with 4:18 to go.

On the ensuing powerplay, Jason Pawloski appeared to have covered a puck, but Ice Bears defenseman Jason Price pool-cued the puck away from the goalie’s grasp and into the net to tie the game.

With 1:13 remaining in the game, Andrew Bellant scored on a one-time at the edge of the goal crease to give Knoxville a late 3-2 lead that they would not relinquish.

Stead earned the third star of the game for the Ice Bears, logging a win in his first professional start.

The Marksmen will face Knoxville at home tomorrow night at 6:00 p.m. on Nickelodeon Teenage Mutant Ninja Turtle Night. Limited tickets still remain and can be purchase on the tickets tab at marksmenhockey.com.