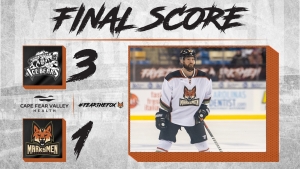 FAYETTEVILLE, N.C.- The Fayetteville Marksmen, proud members of the Southern Professional Hockey League, lost to the Knoxville Ice Bears at the Crown Coliseum on Saturday night.

Knoxville opened the scoring with a goal from Razmuz Waxin-Engback, his first of the season.

The Ice Bears would remain physical, a trend carrying over from Friday’s game in Knoxville. Bryce Ferrell and Thomas Clayton both were assessed five-minute fighting majors in the game for the Marksmen.

In the third period, Knoxville goaltender Jimmy Poreda slammed the door, ending the game with 31 saves and sealing an Ice Bears win after a J.B. Baker empty-net goal.

The Ice Bears will remain in Fayetteville to face off against the Marksmen on Sunday afternoon at 3:00 p.m. It will be the first “Salute to Service” game of the season for the Marksmen and after the game the N.C. State Icepack and the UNC Wilmington Seahawks will square off in a college hockey matchup. Tickets for the Marksmen game are good for the college game as well.