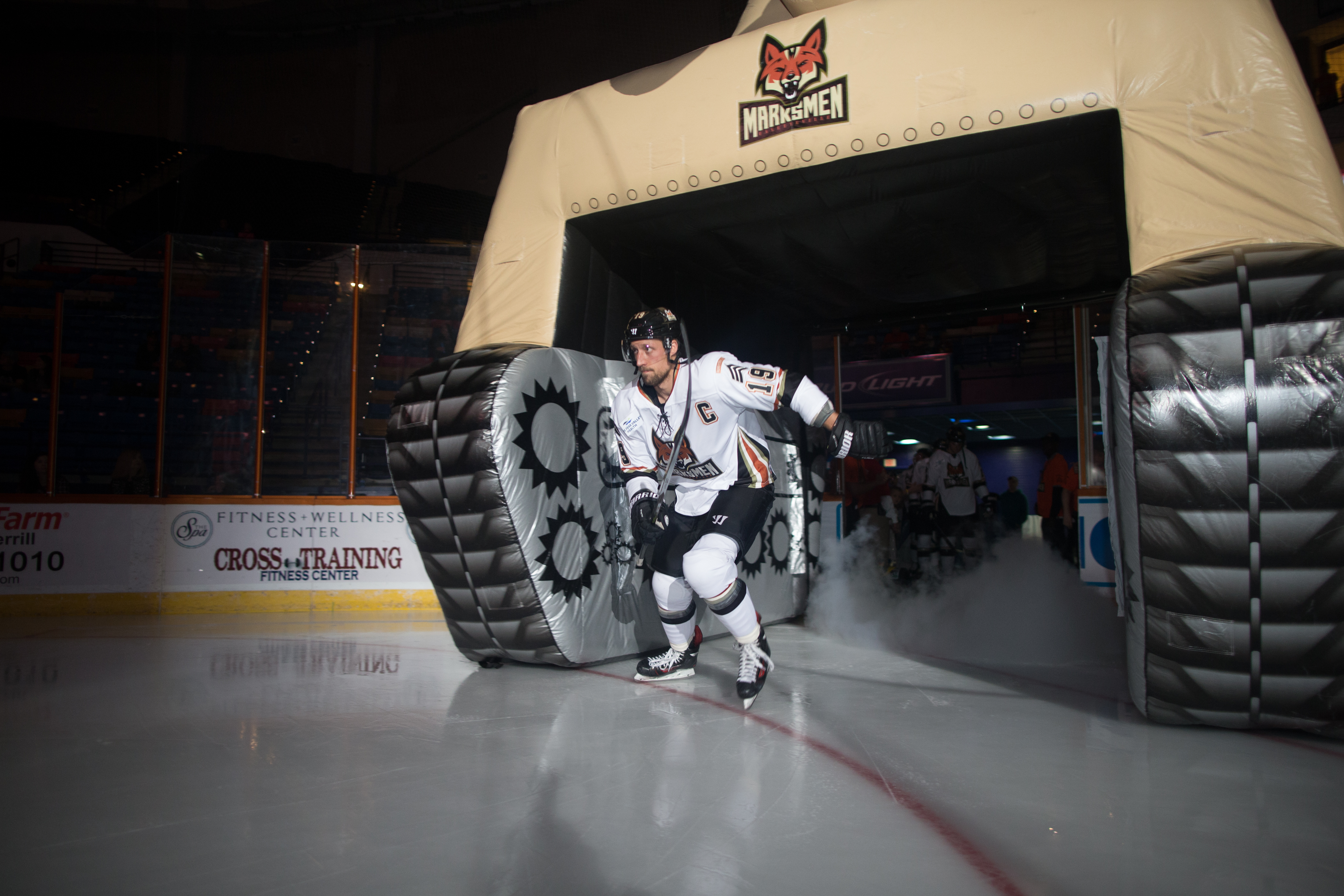 Pensacola, FL- Jake Hauswirth played a part in all the Fayetteville Marksmen goals, but it wasn’t enough as the Pensacola Ice Flyers snuck past the Marksmen, 5-4, on Saturday night at Pensacola Bay Center.

Working off a successful penalty kill, the Ice Flyers opened the game’s scoring for the second straight night. Off a turnover behind the Marksmen net, Trever Hurtz grabbed the loose puck along the left-wing boards and found Eli Lichtenwald in the slot for a quick one-timer past Marksmen netminder, Michael Santaguida.

Late in the first stanza, the Ice Flyers extended their lead to 2-0. Working a stolen puck into the zone, Garret Milan worked a two-on-one into the zone and saucered a pass to Phil Bushbacher whose backhanded try trickled between the pads of Santaguida.

Working to mount a comeback, Max Cook cut the deficit to one, just 1:01 into the second period. While on a power play chance, Cook found Hauswirth for a give-and-go, while working around the defender. Once around the defense, the Captain scooted the puck back to Cook, who used a forehand-backhand deke to freeze Sean Bonar.

Exactly two minutes later, the Marksmen evened the game up, 2-2. Hauswirth picked the puck up in his own end, carried to the faceoff dot in the Ice Flyers zone and dished a pass to John Schiavo, who used a defender to screen Bonar and ripped a wrister to the back of the net.

It didn’t take long for Pensacola to regain their lead, with Stephen Hrehoriak’s fifth tally of the season coming just 14-seconds after Schiavo’s. A Marksmen defender tripped working back to cover, allowing Hrehoriak to come in alone on Santaguida. His initial backhander was stopped, but the follow-up was successful, making it a 3-2 game.

Hauswirth continued to push the pace offensively and was awarded with a goal of his own, bringing the game even for the second time. While shorthanded, Hauswirth poked the puck away at his own blueline, skated in on the breakaway and pushed a wrister on Bonar, who stopped the first shot with the pads, but couldn’t track the rebound, allowing Hauswirth the time to punch it in for his third of the season.

Once again, the Ice Flyers didn’t wait long to take control of the seesaw battle, only needing 27-seconds to make it 4-3 early in the second frame. Working the puck at the blueline, Anthony Calabrese found Nathan Bruyere behind the Marksmen net, and he tipped a pass quickly to the slot where Matt Johnson fired home a one-timer.

With his second special-team goal of the game, Huaswirth brought his team even once more, midway through the second period with a power play tally. Off the faceoff win, Hauswirth worked the puck back to Travis Jeke, who fed the puck back to Hauswirth at the top of the right circle. Hauswirth’s howitzer weaved through bodies and past Bonar, who was screened on the play.

Midway through the final period, Pensacola took advantage of a power play opportunity to earn the game-winner. Weaving into the zone, Calabrese pushed the puck on Santaquida, who made the save with his pads and was able to stop the follow-up shot from Bruyere, but couldn’t stop Brain Morgan’s chance, giving the Ice Flyers a 5-4 victory.

Game Notes: The Marksmen went 2/6 on the power play, while they were successful on 2/3 penalty kills, including Huaswirth’s shorthanded tally. That marker was the first shorthanded strike for the Marksmen all season. With a four point nigh, Hauswirth registered his fifth multi-point game.

Opportunistic Ice Flyers Down the Marksmen