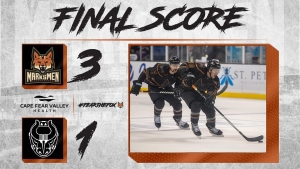 Tanner Froese led the team in scoring with a pair of goals and an assist in the win. His game opening goal came 8:01 into the first period with assists from Don Olivieri and Taylor McCloy.

14:53 into the first period, Olivieri scored from the left-wing faceoff circle to make it 2-0 Marksmen. Olivieri’s fifth goal of the season came with helpers from Froese and McCloy.

Birmingham pushed through the second and third periods with Stefano Durante turning in the best performance of his young pro career.

Durante finished with 32 saves on 33 shots, the lone goal coming from C.J. Hayes 1:22 into the third period.

Froese would get the goal back less that two minutes later banging home a rebound at the far goalpost. Olivieri and Tyson Kirkby added assists, with Kirkby completing a two-point weekend in his professional debut.

Every Marksmen goal came on the power play tonight as Fayetteville was 3/5 on the man-advantage.

Fayetteville has earned six points this weekend with a win over Macon and two wins over Birmingham. It marks the first time this season that the Marksmen have swept a three-game set.

The Marksmen now sit at 14-6-0 riding a three-game winning streak. They’ll travel to Roanoke on Dec. 23 to face the Rail Yard Dawgs who also completed a series sweep this weekend. After Roanoke, the Marksmen will break for six days over the Christmas Holiday.

Birmingham falls to 3-15-4 and will next see the Marksmen in Pelham on Jan. 22. It will be the last trip to Pelham this season for Fayetteville.

The Marksmen return home for Operation Sellout on Friday, Dec. 31 at 6 p.m. vs. Macon. All tickets in the building are just $10 and you can get yours by skating to marksmenhockey.com and clicking the tickets tab.