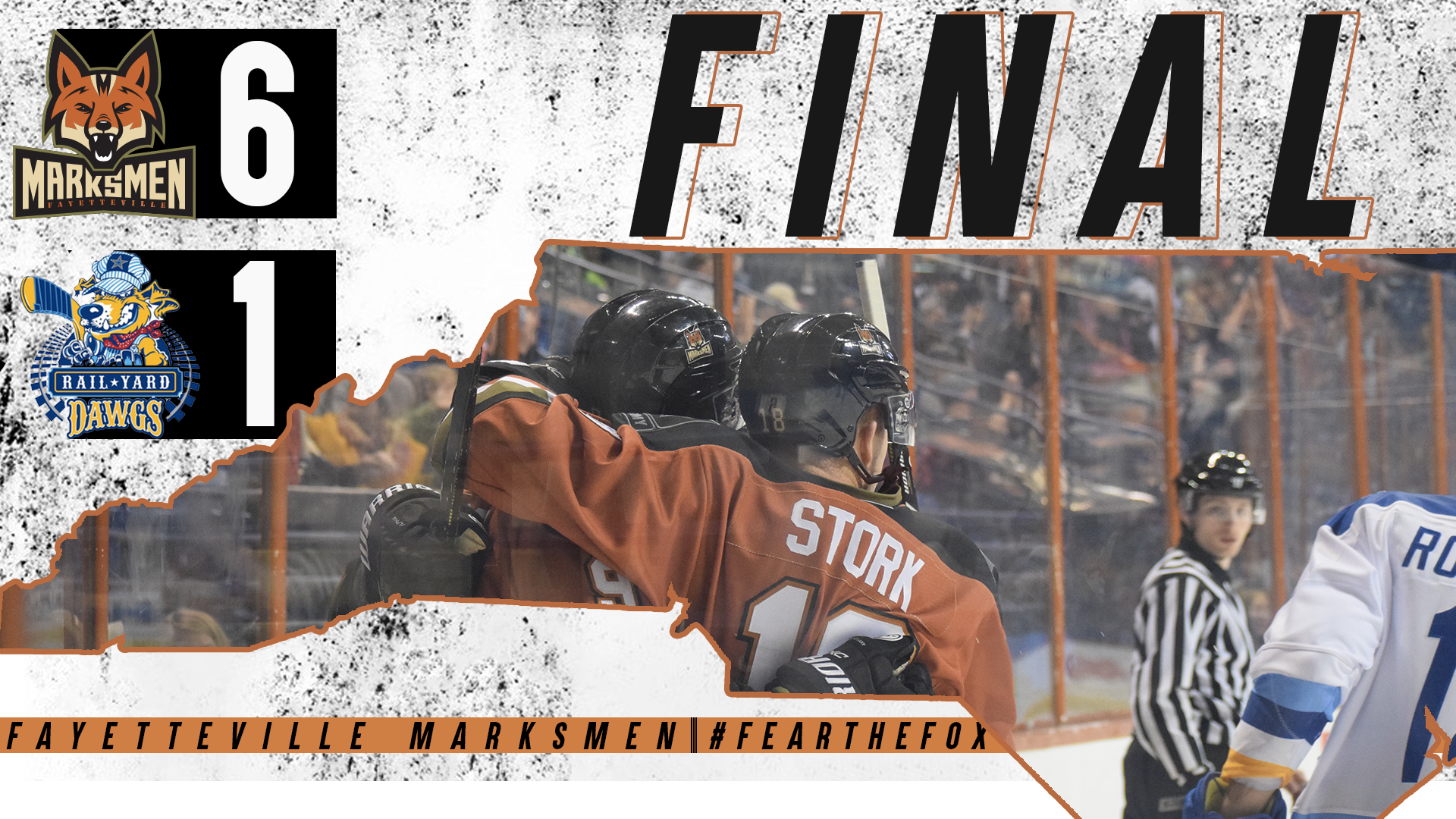 FAYETTEVILLE, N.C. – After a tough test in Birmingham last time out, the  Fayetteville Marksmen would welcome familiar Thanksgiving foe Roanoke out to home ice at the Crown for the first time in team history on the last Thursday in November. Roanoke, riding an eight-game skid, had a week of adjustments looking to get going in the right direction. After 4 call ups in under a week, the Marksmen were looking to do the same and continue their success.

After a relatively back-and-forth start, the Marksmen would strike first blood on home ice 9:04 into the game. Brian Bowen would be responsible for the goal – his seventh of the year – and help the Marksmen prevent a repeat of the rollercoaster these two teams went on 12 days prior. On the power play 5:05 later, Luke Stork would immediately make his presence known again in scoring his team-leading eighth goal of the year, which would end up the game-winner. A 10 save period from Blake Wojtala would seal the first with a 2-0 Marksmen lead.

Period two would see more fight from the Dawgs, as they’d find pay dirt early with a goal past Wojtala 3:24 into the period. Fayetteville would strike back a few minutes later on the power play from a net-crashing Darius Davidson, who’d net his second of the year. That would be all the fight that could be mustered from Roanoke in the scoring department for the period and game, as Fayetteville took a 3-1 lead to the second break.

In the third period, Fayetteville would finally meet their coaches demands and execute to finish. An early Taylor McCloy goal on the power play would give the Marksmen a 4-1 lead 2:26 into the third, and secure the team at 3/7 on the night in the man-advantage department. The story of the second-half of the third would be Shane Bednard connecting with Beau McCue – twice. In just 1:45, Bednard would feed McCue two perfect passes for two game-ending goals. The game would finish with a final PK from the Marksmen, who would finish 3/3 on the night. Blake Wojtala, in his first start as the Marksmen #1, would record 30/31 saves and look like a confident, steady, and ready-to-lead goaltender.

Fayetteville finished in shots 36-31, and would take their second straight win 6-1. The Marksmen have a 5-0 record against the Rail Yard Dawgs on the season now, who drop their ninth straight, while the Marksmen would improve to 10-1-1. Roanoke heads to Knoxville for a battle tomorrow night, before the Marksmen host the Ice Bears on Saturday night for the final game of a thus-far successful Thanksgiving weekend.