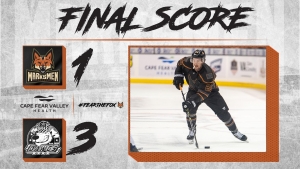 The Rail Yard Dawgs opened the scoring 17:38 into the first period when Matt O’Dea collected a loose puck in the slot to score.

The teams would play a long stretch without scoring until less than five minutes to go in the second period when Shane Bednard scored to make the game 1-1. Since returning from a stretch on the injured reserve, Bednard has scored in two of the last three games he’s dressed in.

Roaonke would not be denied in the second period though as Jeff Jones scored on the near post just two minutes late. Jones would finish with a goal and an assist in the game.

The Rail Yard Dawgs would capitalize on their only powerplay as Brant Sherwood scored at the nearside faceoff circle. Sherwood would also finish with a goal and an assist in the game.

Roanoke’s win marks the first time this season they have defeated Fayetteville in regulation at home.

The two teams will see each other again in two weeks for a game in Fayetteville on Jan. 14 and a pair in Roanoke on the 15th and 16th.

The Marksmen return home tomorrow night to face the Macon Mayhem at 6 p.m. at the Crown Coliseum. It is the team’s annual Operation Sellout night and limited tickets still remain in select sections. You can get yours by selecting the tickets tab on the homepage of marksmenhockey.com.