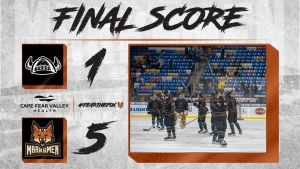 The Marksmen opened the scoring 13:30 into the first period with Taylor Best lifting the puck over the short-side shoulder of Mayhem goalie Michael Stiliadis.

Best would score his second of the game with less than a minute to go in the first period to send Fayetteville into the first intermission with a 2-0 lead.

The scoring continued in the middle frame as Shane Bednard scored from Bryan Moore and Best. The line of Bednard, Best, and Moore would account for four of the five goals scored in the game for the Marksmen.

Early in the third period, Caleb Cameron deflect a feed from Nigel Slade into the net to break Stefano Durante’s shutout bid. Durante would still turn in a 17-save performance with just the lone blemish.

Moore would add one more for the Marksmen on a wrist shot from the slot to make it 5-1.

The Marksmen have now defeated Macon all seven times the two team have met. With a win in any of the seven games remaining between the Mayhem and the Marksmen, Fayetteville will clinch a season-series win for the second straight season vs. Macon.

If you are planning to bring your pet, instructions on getting them into the building will be posted on the team’s social media and website tomorrow at 12 p.m.