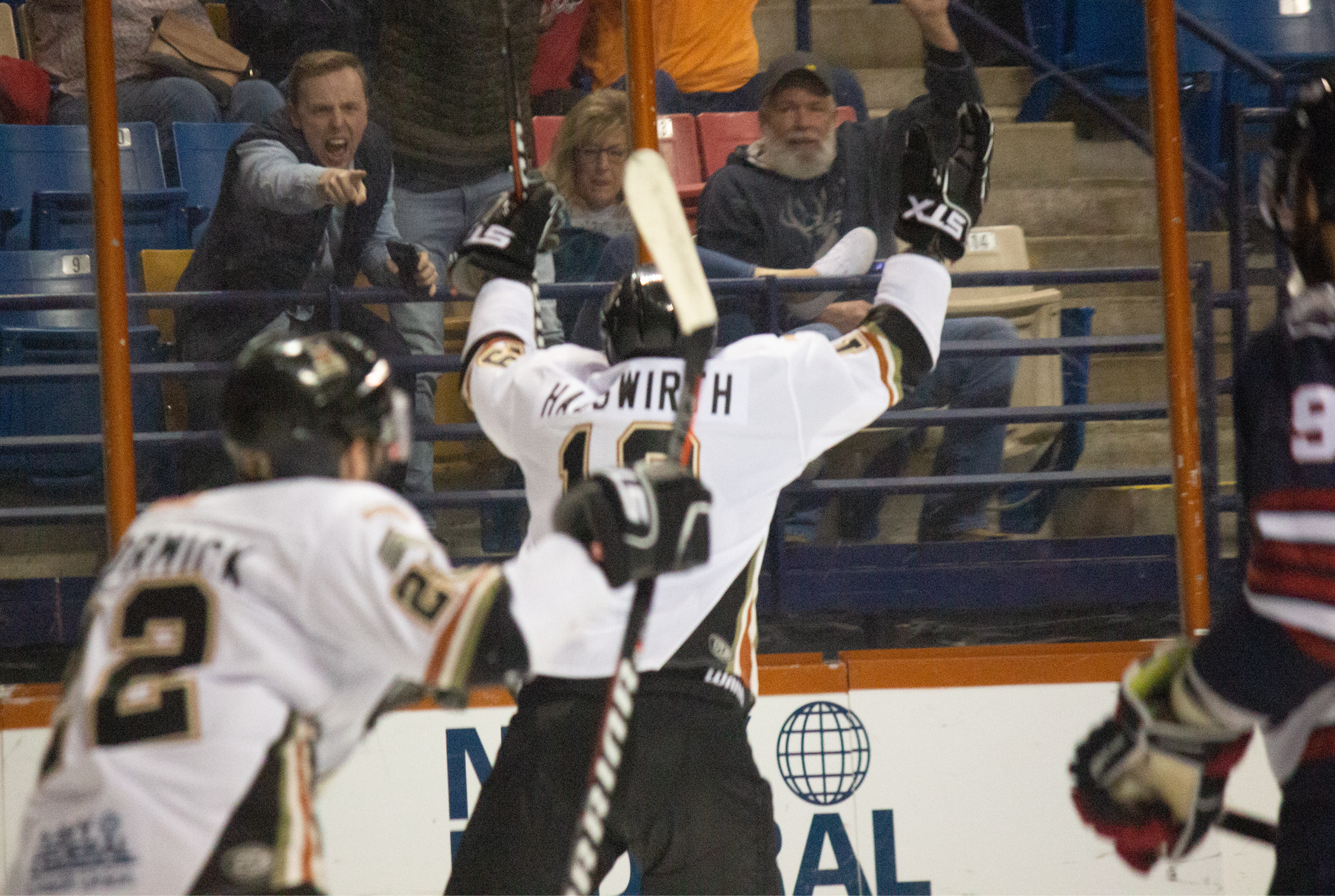 FAYETTEVILLE, N.C. – In a game that featured two all-star goaltending performances, Fayetteville’s Dillon Kelley and Macon’s Ian Sylves, it took everything the two rival teams had to decide this one. The Mayhem traveled to the Crown Coliseum to take on the Marksmen, fresh off a home win Wednesday against Roanoke.

Things were heated almost as soon as the puck dropped between the Mayhem and Marksmen. The Marksmen owned the first period, leading Macon in shots-on-goal 17 to 8. The Marksmen claimed the first seven shots-on-goal, putting Mayhem Goaltender Ian Sylves to work. Although the first period remained scoreless, it wasn’t for a lack of effort. Both teams were throwing everything but the kitchen sink at each other, with no luck.

The second period, much like the first, saw an aggressive style of play from both sides. Although no official fights unfolded, there was a ton of verbal disagreement. This time around however, Macon led the period in shots-on-goal with 12. Despite two opportunities to score on the man advantage, Macon couldn’t find their way past the brick wall that was Dillon Kelley.

When the third period rolled around, the game was still scoreless. Both sides giving it all they had, but yet neither was giving an inch. It appeared the only way someone would score would be because of one error. That error came with just about ten minutes remaining in the game, as Justin Levac was sent to the penalty box for a hooking penalty. With Levac in the box, the Marksmen looked to finally capitalize on the power play unit for the first time in the game. Captain Jake Hauswirth finally found the back of the net on the man advantage – thanks to a one-timer pass from Max Cook – giving the Marksmen the lone goal of the game. Hauswirth’s goal was his fourth goal in three games; an impressive stat to say the least.

Taylor Pryce gave the Marksmen the final, needed momentum push in a decisively won fight against SPHL Player of the Week Caleb Cameron. The dominant fight brought the loud fanbase to their feet for the final six minutes, pushing Kelley and the Marksmen the rest of the way to hold on for an emotional 1-0 statement win.

The Marksmen ride a two-game winning streak after Christmas into Knoxville tonight, as they look to end 2018 hot. The last time the Marksmen were in Knoxville, they dropped a close one in overtime on Black Friday. Tonight’s battle promises to be one of the best around the league.

With the Marksmen on the road, join our friends at On-After Sports Bar & Grub for the official “Home away from Home” watch party, as the Marksmen travel to Knoxville to take on the Ice Bears in the first of four games on the road for the Marksmen.

If you can’t make your way out to On-After, catch the game on SPHL Live ($) or on the Marksmen Radio Network as the “Voice of the Marksmen” Shawn Bednard calls all the action.