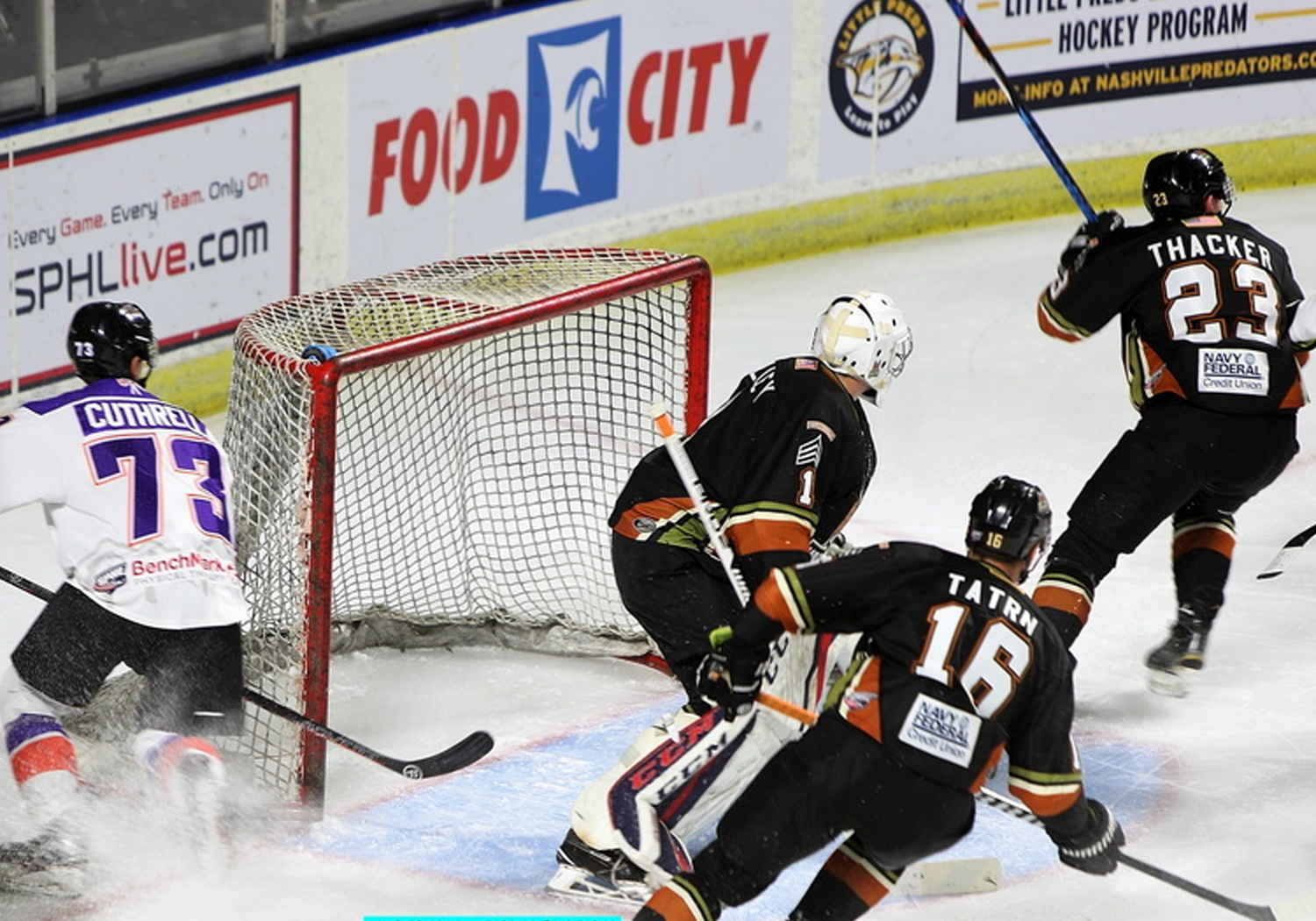 Knoxville, TN – With a two game winning streak going into their final game of 2018, the Marksmen are playing the best hockey they’ve played all season. Last night was no different, having to come from behind twice and forcing overtime.

Once the puck dropped, the Ice Bears brought it to the Marksmen early. In a period that featured a lot of back-and-forth play, it was the Ice Bears who struck first. In what was a delayed penalty, Marcus Ortiz refused to wait for the man advantage and got one past Dillon Kelley for the first goal of the game. The Ice Bears led the first period in goals and shots-on-goal, with eleven shots in the direction of Dillon Kelley. The first period ended with the Marksmen down 1-0.

The second period began much different than the first, as the Marksmen owned the first four shots-on-goal. The third shot of the period saw Tim Kielich (7) find the twine on a rebound from a Kyle Thacker shot to knot things up barely three minutes in. In what was a valiant effort by Dillon Kelley in the crease, Danny Cesarz continued to be a thorn in the side of the Marksmen Goaltending core. Cesarz’s sixth goal of the season put the Ice Bears up 2-1. Despite pressure being applied to Hayden Stewart, the Marksmen were unable to capitalize on their scoring chances, and would end to the third down 2-1.

The Marksmen entered the third period down a goal, and looking to make something happen. With a more defensive-focused start to the period, the Marksmen were starting to finally ride against the crowd’s momentum. It was time to capitalize. Kyle Thacker did just that, taking a shot that was tipped in by Brian Bowen. Thacker found himself having a big night, two assists to even the score each time. Bowen’s goal was his fifth of the season, and a huge one for the Marksmen, knotting the game up for the second time. An intense final few minutes would see no results, as both goaltenders would do everything they could to force OT.

Knoxville came out hot in overtime, as they nearly had a goal in the first ten seconds, save the fact that Dillon Kelley was on it. Just over a minute later, Alfred Johansson almost ended things, bouncing a loud-shot off the crossbar. Although Johansson couldn’t score, it was a Marksmen who decided the game. Shane Bennett, after a puck passed back from Dillon Kelly, went to coast-to-coast to fire a rocket of a shot from the left side to give the Marksmen the Overtime victory, 3-2.

Head Coach Kallechy’s message after Christmas was simple: be the best team after the holiday break. The Marksmen are doing just that, ending 2018 on a three-game winning streak, and a perfect record of 3-0-0 since Christmas break.

Dillon Kelley had an impressive 32 save night, even earning his first point on the Shane Bennett game winner. A three-win week allows for a couple days off for the Marksmen, before they return for 2019.

Fayetteville prepares for their first game of 2019, as they will travel to Pensacola, Florida for a weekend to take on the Ice Flyers, starting January 4th at 7:35 P.M.

This is the first meeting of the season between the two teams, with each trending in opposite directions.