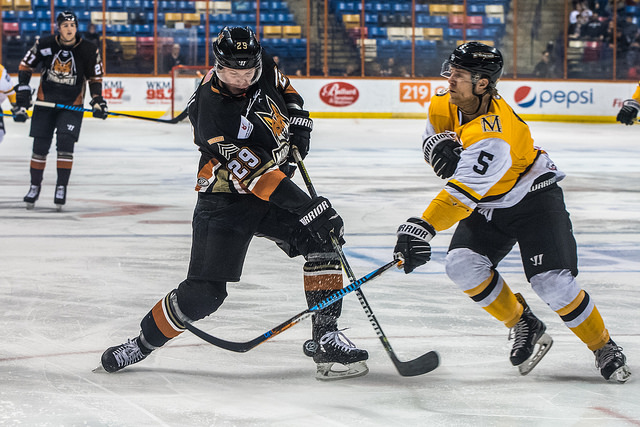 Fayetteville, N.C-The number 29 isn’t a daunting number in most instances, especially when talking about age. Yet, when looking at hockey players, it seems to carry a negative connotation, a feeling that a player is coming to the end of their career and prepare to ride off in the proverbial sunset. While that may be the rule for the majority, it certainly isn’t the case for Marksmen forward, Kyle McNeil, who concluded the 2017/18 season with the second highest point-total (27) of his career.

A seven-year veteran of the SPHL is nearly unheard of, with the call-ups to higher leagues, or the allure of playing for more money in Europe, but McNeil knows where he belongs and has earned his longevity.

“I know I’m a North American player, I’m not a fast, young kid,” McNeil said with a chuckle. “To stay in the league this long has been nice and I’m grateful for the opportunity I’ve been given.”

As is the case in most situations, staying power doesn’t come unless there is a willingness to learn and grow in a certain position.

“When I first came into the league I was a tough guy,” McNeil added. “I fought a lot, but I knew if I wanted to be a veteran I had to transition my game to accommodate the style of hockey nowadays.”

“When I started my career here and played my first four seasons, this league wasn’t that well known, it was really watered down,” McNeil recalled. “But now you look at it and there are great players coming in here, guys from Europe, division one hockey programs, and major junior hockey leagues.”

The league isn’t the only thing that has changed, with McNeil having to learn a whole new system in Fayetteville.

“Coming in here this season, I didn’t know anyone. The only guy I knew was Kyle (Sherrill) the Athletic Trainer, but I’ve been blown away by the changes and experience in being here this season.”

As for that sunset ride, that will have to wait a little longer for McNeil, who has no intentions of retiring just yet.

“I hope to play one or two more years and then get into coaching. Whether that is junior or professional, that remains to be seen, but I’ve always thought about it.”

While the on-ice struggles have been evident, the Marksmen have made strides in many areas, especially with community involvement, helping to raise funds for organizations such as; Boy Scouts of America, Cape Fear Valley Health Foundation, and Habitat for Humanity. A linchpin in those events, McNeil’s personality lends itself to fans, who flock to him whenever he is around.

“I’m a locker room guy and just try to stay positive. When it’s all said and done, the sun is going to rise again tomorrow. We would have preferred things go differently on the ice, but it’s important to have fun. If we are having fun, the fans are having fun.”