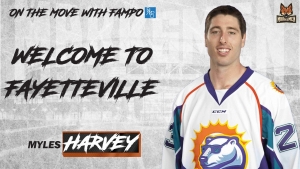 FAYETTEVILLE, N.C.- The Fayetteville Marksmen, proud members of the Southern Professional Hockey League, announced that defenseman Myles Harvey has signed with the team.

After college, Harvey skated in the ECHL with Orlando, Wheeling and Utah. His best season came in 2013-2014 where he scored three goals and logged four assists with the Wheeling Nailers. Harvey also was called up to the American Hockey League for a pair of games with the Hamilton bulldogs.

Harvey will be available to skate as soon as Friday’s game vs. Macon.

The Marksmen have also released D Sam Stormoen. Stormoen had nine points in 34 games with the Marksmen this season.

Marksmen rack up win 30 with victory in Macon