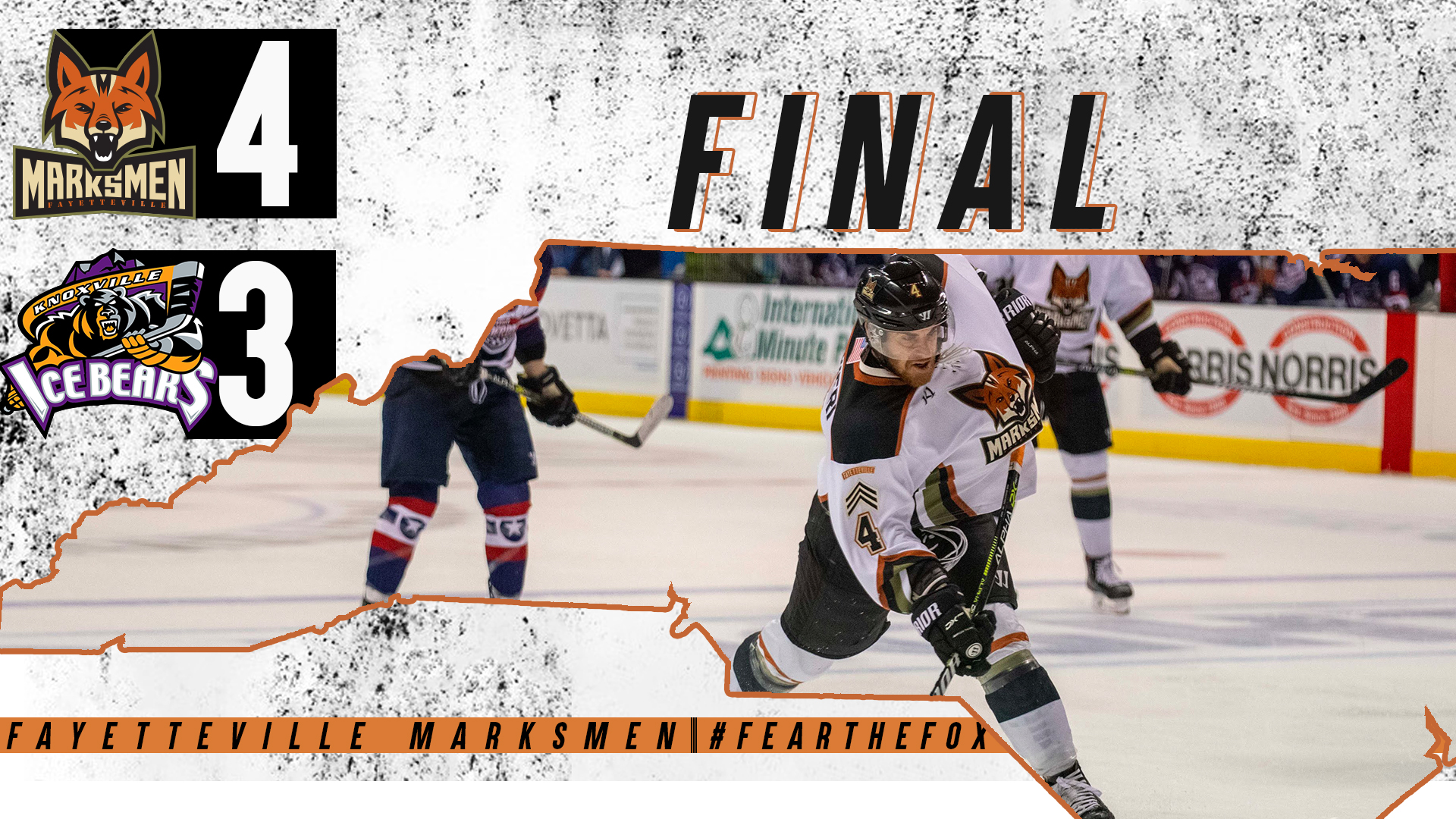 KNOXVILLE, TN – Returning to Knoxville on the heels of an odd finish last time out, the streaking Marksmen would look to continue their success against an Ice Bears team they’ve had recent good fortune against. Fayetteville would be well-rested heading into the battle, arriving in the Smoky Mountains the previous night ahead of a pair of road games in different cities.
The rested Marksmen would come out of the gate looking like the home team, as they would start their takeover early. In the first few minutes of the game, the road foxes would take the first five shots, and keep the puck stuck on one side of the ice. Knoxville would eventually find their groove, and the game would start to even out. Upon a penalty against new defenseman Jarret Kup, it would appear things would start to move in the right direction for the Ice Bears, but the Marksmen and Captain  Max Cook (12) would ensure that would not be the case, as a scrum in front of the Knoxville net would see the first goal of the game for Fayetteville shorthanded. Minutes later, as he’s done so much recently, Josh Victor would drop the gloves at Center Ice against Dwyer Tschantz, and would control the entire fight in an impressive display. Riding high off the momentum, and still leading in shots, Fayetteville would take a two-goal lead as new-guy Kup (4) would runneth over on a drive to the net, and strike for his first in his new sweater. Fayetteville would finish the period with a 2-0 lead and a 13-8 shots advantage.
In the second period, the Marksmen would continue doing what lead to their success in the first: puck control and strong neutral-zone play. A couple goals would help as well. Don Olivieri would be the goal-scorer to note in the second, as he would go bardown on the power play to make it a 3-0 lead for Fayetteville with 14:28 to go in the period. Exactly two minutes later, the Ice Bears would finally get on the board as Josh Pietrantonio would sneak the puck under Blake Wojtala’s left skate, and just tuck it in the net to make it a 3-1 game. That wouldn’t hold for long, as Olivieri would come knocking once again with an absolute floor rocket from the blue line, giving the Marksmen their three-goal lead again and his second of the night. The period would be back and forth the rest of the way, and held a 4-1 lead heading to the final period. Shots would be knotted at 21 aside.
Period three would not go in favor of the Marksmen, as Knoxville would feed off the energy of their crowd and rush toward a comeback effort. It would start early from Cooper Jones on an open goal mouth 4:08 into the period, which would make it a 4-2 game. Pulling the goalie with just under three minutes left, the Ice Bears would score from Lucas Bombardier, but be a day late and a dollar short, as their comeback would run out of time rather than gas.
Fayetteville holds on for their eighth straight victory, and at least a point in 16 straight games. Don Olivieri would collect his team-leading fourth game-winning goal. The Marksmen would quickly ship up and ship out, enroute for Huntsville, Alabama and a rematch with the Havoc in the Rocket City for a 4 P.M. EST puck drop at the Von Braun Center.
January 31, 2020/by Fayetteville Marksmen
https://marksmenhockey.com/wp-content/uploads/2020/01/win.jpg 1080 1920 Fayetteville Marksmen https://marksmenhockey.com/wp-content/uploads/2022/05/Marksmen-286x300.png Fayetteville Marksmen2020-01-31 22:35:242020-01-31 22:37:21Olivieri’s Second Period Pair Enough as Marksmen Hold on for Eighth Straight