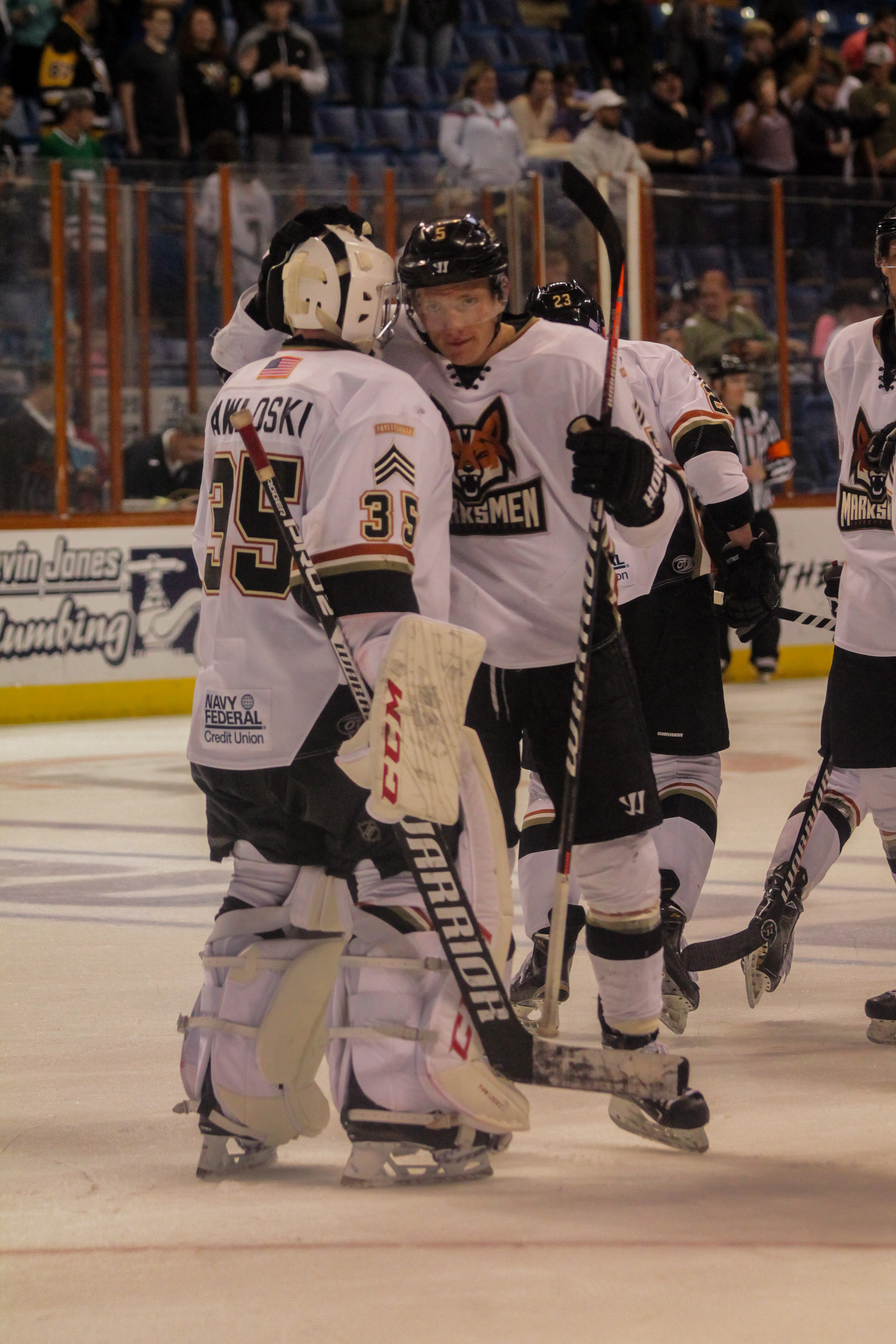 FAYETTEVILLE, N.C. – The Marksmen welcomed the Birmingham Bulls to town for Fayetteville’s first-ever SPHL playoff game. The Marksmen looked to take game one of three at home, putting them in a prime position to upset the second ranked Bulls. The game was uneventful in the early going, with only 11 combined shots on net through 10 minutes of play. Surprisingly, the scoreboard stayed blank.

Other than a pair of penalties for Fayetteville, nothing much happened until the three minute mark. Opening up the scoring in the playoffs was rookie-defensemen Brandon McMartin on a one-timer from Sam Wilbur. The first ever postseason goal for the Marksmen gave them a 1-0 lead. Fayetteville was able to prevent a late period goal, taking their lead into the intermission.

The middle period started out almost identical to its opening counterpart. Few shots in the opening 10 led to an uneventful early half of the period, with plenty of back and forth play. Fayetteville was still clinging to a single goal lead, pushing to extend it. The insurance finally came, with 9:33 left on the clock, the Marksmen scored again. Cody Brown found the back of the net, again off a one-timer, extending the lead to 2-0.

Even with the lead, Fayetteville was still looking for blood. Following a Birmingham penalty, the league leaders in power plays got to work three minutes later. It took just over a minute for the Marksmen to score on the power play. Taylor McCloy scored the loudest goal of the season off the crossbar, extending the Fayetteville lead yet again. The lead now sat at 3-0, with just under half the game to play.

Fayetteville got whistled for another penalty, their third. The penalty killers came in clutch, defending all of the Birmingham advantages. The Bulls could only muster a single shot on the power play, leaving only 1:28 on the clock once it was done. Only two shots got sent at the net in the final three minutes in the second period, none of which scored. The Marksmen took their now three goal lead into the intermission.

Two periods of sameness led to a third period with plenty of corollaries. Nobody got scoring early, and the Birmingham score stayed at zero. A few penalties got grouped together, as both teams had the most penalties in the third, but still no scoring. Birmingham had not been shutout all season coming into this contest, and the Marksmen didn’t seem like the squad that could do such a thing. Here we are, only 15 minutes away from the first one of the season for the Bulls.

Shots weren’t at a high rate either, as both teams tied their game low in the third. Neither team had great puck control in the offensive end, a rare statement for the Bulls. Just under the seven minute mark, a fight broke out from Melkert and Crisfield, really encompassing all the excitement for the period. The score still stood at 3-0 with just under seven minutes to play.

Birmingham got yet another power play, to no avail. They had only one shot with the advantage, failing to do much of anything. Once Fayetteville got back to full strength, the Bulls rattled off a pair of shots, not scoring on either. Birmingham decided to use their timeout with exactly 2:30 remaining in the game, trailing by three.

Following the timeout, the Bulls’ goaltender, Maveric Parks, came to the bench in favor of an extra skater. In over a minute, with an extra skater, Birmingham could only put a single shot on net. The Bulls got called for a penalty, forcing them to put the netminder back on the ice.

The penalty gave the Marksmen a little late life, deciding to put even more emphasis on this win. The Captain Jake Hauswirth scored with only 45 ticks left on the clock, extending the lead to four and putting the game on ice. The clock drained to the final seconds to the first ever Marksmen playoff win.

A 4-0 win over the Bulls in Game One can really set the tone as both teams took the overnight trip to Pelham for Game Two tonight. Fayetteville is looking for the sweep on Saturday, following the huge win last night. Jason Pawloski was unstoppable in the crease tonight, stopping all 30 shots that came his way. His outstanding play paved the way for the Marksmen offense to do work and convert on poor defensive plays by the Bulls. The Marksmen are one win away from earning their spot in the league semi-finals.

With Home Playoff-Debut, Marksmen Look to Tame the Bulls