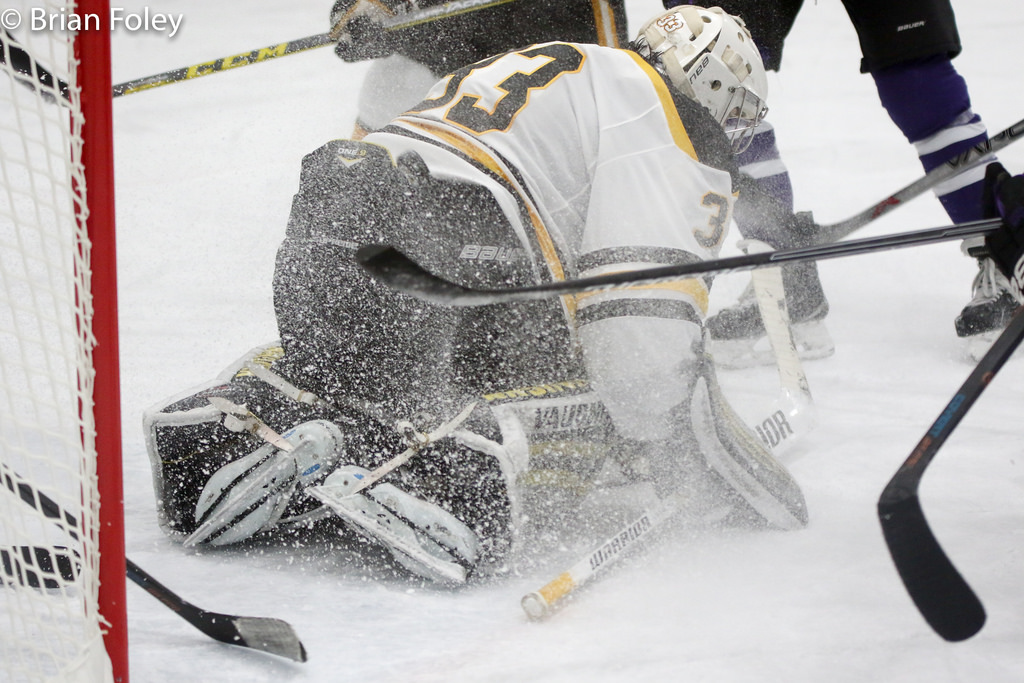 After bringing aboard two NCAA D3 goalies with call-ups to the ECHL, the Marksmen now welcome aboard American International College (NCAA D1) goalie Alex Murray as the final backstop for Training Camp.

Standing at 6’0 and 194 pounds, the left-hander from Burlington, Ontario spent most of his pre-Junior and Junior career in his hometown first with the Burlington Eagles Midget teams, and then with the Burlington Cougars (OJHL). After his time in Midgets, Murray was selected in the 14th round (#262 Overall) by the Ontario Hockey League’s London Knights, and thus began his time in the OJHL.

After three seasons with the Burlington Cougars, with a 3.5 GAA and .906 save percentage in 53 games, Murray found his way to the British Columbia Hockey League’s Prince George Spruce Kings, where he put up the best numbers of his career. A 2.44 GAA with a .917 SV% during his 38 regular season games, leading to a post-season with a 2.57 GAA and .912 SV% in six games.

This Junior career lead to Murray committing to AIC, in the Atlantic Hockey Association of the NCAA, where he would spend his next four years. During his time as a Yellow Jacket in Springfield, Massachusetts, Murray put up a 3.99 GAA with an .884 SV% in 84 games.

Now, as an alumni of AIC, the 25-year-old goaltender joins the Fayetteville Marksmen Training Camp roster, looking to continue his fight and journey to compete at the highest level.

“I’m feeling pretty excited, it’s always been a goal of mine to play professional hockey, and it’s an unbelievable opportunity that I’m looking forward too. The Marksmen was an easy decision. I talked to Coach Kallechy, and he was very enthusiastic of the direction of the team. Him being a goalie as well, I just felt like it was going to be a good fit from the beginning,” said Murray “For me, I believe I can bring my work ethic. I am a competitor, and always try to help my teammates improve, as well as push myself. I think my attitude is another aspect I can bring, I pride myself on being a good teammate, and doing anything I can to help this team win.”

Coach Kallechy shared his enthusiasm in bringing aboard Murray.

“Alex is an experienced, agile goaltender who has been shown to exhibit a high compete level. Any time we can bring aboard a D1 goaltender to Camp, it’s a crucial addition,” said Kallechy “He comes highly recommended, and I’m excited to see just what he can do when he’s down here.”

The Fayetteville Marksmen are excited to welcome Alex Murray to his new home for the 2018-19 season, and look forward to him being the bedrock of what promises to be an exciting season of hockey in the Cape Fear. The 2018-19 Marksmen Home Opener is October 19th against the Roanoke Rail Yard Dawgs, and Opening Night tickets are on sale NOW!