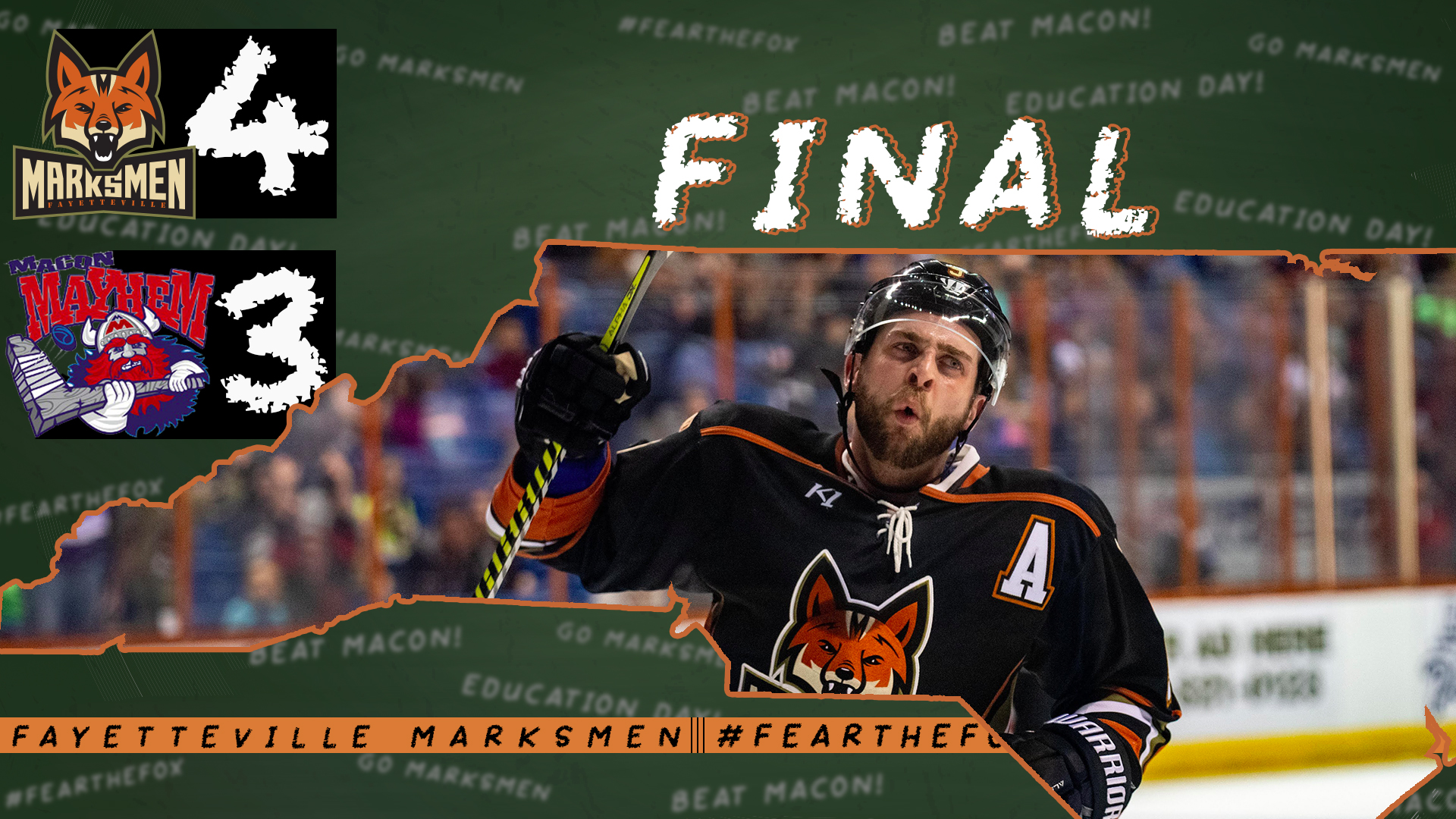 FAYETTEVILLE, N.C. – Despite fear of snow in surrounding communities, the Marksmen were able to keep hot against Macon, supplying their own flurry of goals in the third to find a 7-0 record against the Mayhem. Even with multiple counties unable to send their schools due to cancellations, the thousands of students in the Crown supplied all the early-morning energy the team would need for the win.

In a perfectly bookend performance, Taylor McCloy would start the game the same way he would intend to finish it; scoring. A mere 2:37 into the chorus of screams from the K-8 students, McCloy would net goal number 15 on the season, and start the day off right for the Marksmen. With just under a minute left in the opening frame, the Mayhem would match the score from Josh Cousineau, and end the period at 1-1.

Macon would find their second wind in the second period, continuing off the late success following an early goal from Brian Bowen – his 26th of the season – on the Power Play just under four minutes into the period. What would follow in the final 16 minutes of the period would be a pair of goals from SPHL Player of the Week Caleb Cameron, and with just over a minute left in the period from David Powlowski. The Mayhem, like any rival sports team in a high school movie, would take a lead into the last part of the game: 3-2.

The comeback kit would find their way once again heading into the final frame, as Shane Bednard would knot things up with his fifth of the season just over five minutes into the period. The score would stay stuck at three a side until roughly halfway past the third period, when Taylor McCloy would close the book that he opened with his 16th of the season, and the eventual game-winner. After a disappointing weekend in Quad City, the alternate captain would start this three-game stretch off on a hot-start, leading the Marksmen to their seventh straight victory of the season against Macon for a perfect mark against the Mayhem.

Fayetteville will head on the road for their next two games, taking on the Mayhem down in Middle Georgia on Friday Night, and heading over the Smoky Mountains against Knoxville for Saturday night to close the weekend. Currently, the Marksmen hold First Place in the Southern Professional Hockey League, with the now second place Peoria Rivermen playing Roanoke later today.

Marksmen ink two as they prepare for three game week!