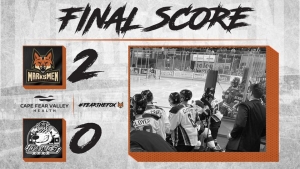 The two teams battled to a deadlock after 40 minutes of play with goaltenders Jason Pawloski and Austyn Roudebush trading saves.

Finally, just over seven minutes into the third period, Tanner Froese slid a shot under the glove-side arm of Roudebush, tallying his first goal of the season.

Fayetteville stood solid behind Pawloski who logged a 22-save shutout. Pawloski has now stopped 47 straight shots and has played 117:25 without allowing a goal.

Drake Glover would add an empty netter to seal the victory with 23 seconds left in the game.

“We sure do like to make it interesting, but we pulled through.” -Fayetteville assistant coach, Jason Binkley.

“I really respect that team, they play hard, and we have a lot to clean up.” -Fayetteville head coach, Cory Melkert

“Yeah, I just wished I had stopped that first shot last week,” – Fayetteville goalie, Jason Pawloski on if he could have done anything better in Friday’s 2-0 win.

Fayetteville has now secured the top spot in the SPHL standings after Evansville’s loss to Quad City. The Marksmen are 2-0-0 with 4 standings points. Roanoke will remain at the bottom of the standings at 0-2-0 and 0 points.

SOMETHING YOU MAY HAVE MISSED

Drake Glover’s empty net goal earned him the team lead in the category. Glover’s shot from his own zone hit the ice wide to the left of the net, but curled in. Oddly enough, Matt McNair was closest to the puck and should he have scored, he would have had the team lead in goals.

The Marksmen (2-0-0) will square off with Macon (0-2-0) in a home-and-home series next weekend. On Friday, Oct. 29 Fayetteville will travel to the Macon Centerplex and on Saturday, Oct. 30 the Marksmen return to home ice for the first time in 609 days. Fans are invited to come early and enjoy the Marksmen Halloween Bash with trick-or-treating, games, and music starting at 4:00 p.m. before the 6:00 p.m. puck drop.